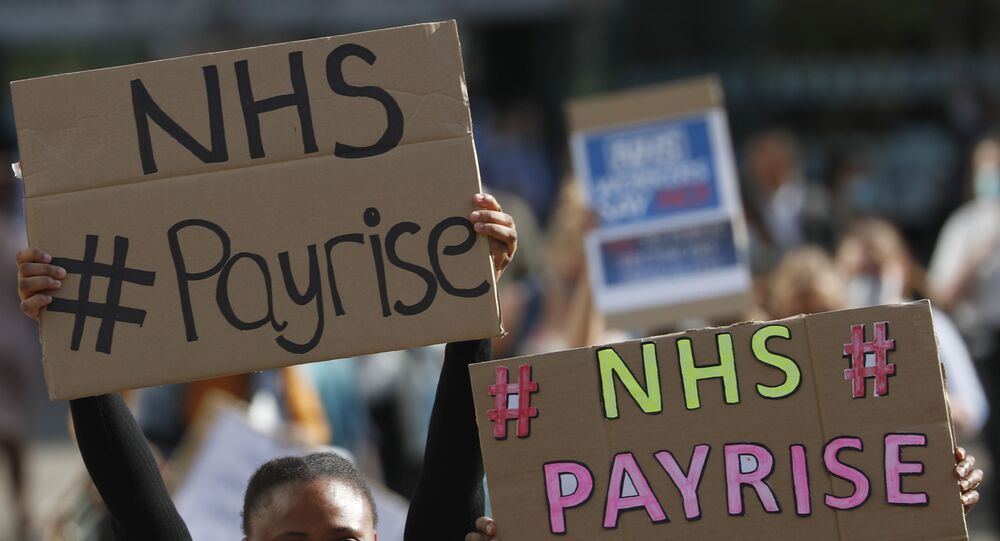 The proposed return of the UK's lockdown tradition of publicly clapping for those working in the health and other essential service sectors has become the subject of controversy after its founder has been accused of politicising the initiative.

The founder of the UK's renewed "Clap for Carers" has distanced herself from the event hours before it is scheduled to return after she received threats online.

In an earlier statement on Twitter, 36-year old Annemarie Plas said that she was "looking forward" to joining another show of public clapping in support of those working on the frontline against the coronavirus pandemic at 8pm on Thursday.

However, Plas then said that she never wanted the initiative – which was launched in March – to be politicised and that due to the personal attacks against her, she will no longer participate in the event.

"I did not set out to make a political statement and will not put my loved ones at risk," she said.

"I have no political agenda, I am not employed by the government, I do not work in PR, I am just an average mum at home trying to cope with the lockdown situation."

​She continued saying that her absence doesn't mean the applause is canceled and that she does not want to "dampen the show of positivity and unity" the clap represents.

This comes as National Health Service staff and supporters have criticised the return of Clap for Carers – renamed "Clap for Heroes" – saying they would prefer the public to show support by respecting lockdown rules instead.

Some on Twitter called the event "cringeworthy and pointless" and called on people to let doctors and nurses get on with their jobs.

​Others said they would prefer a pay rise and an end to abuse, accusing the government of promoting pity and the idea that the service can't cope.

​#NHSblueheart began to circulate online in support of frontline workers, some of whom urged people to respect lockdown rules in place of the public display.

The #nhsbluehearts are asking people not to clap. To stay indoors. I know the clapping is more about providing mental health support to everyone stuck in lockdown and seeing your neighbours even from a distance can help but let's find another way please. pic.twitter.com/iueklZIr4W

​Some even criticised the event for encouraging people to take part in mass clapping events, increasing the risk of spreading the virus.

Yes, because we definitely need to encourage this kind of behaviour yet again. pic.twitter.com/WR0uZiCzHn

​People across the UK will once again be encouraged to applaud in appreciation of those working to combat the coronavirus pandemic.

A Dutch national living in London, Plas concocted the "spontaneous idea" as a means to show support for frontline workers, initially believing it would be just her close friends taking part in a video chat but the event soon became a weekly national tradition.

Millions of people across the UK turned out to support those working to fight the pandemic. Others set off fireworks, honked car horns, and even used pots and pans to make noise.

Members of the Royal Family and leading politicians such as Prime Minister Boris Johnson also took part in order to show support. However, Plas says the event had become "too politicised."

Last month, NHS nurses and other public sector workers had their pay frozen by the government and will have to wait until at least May to receive a wage increase.