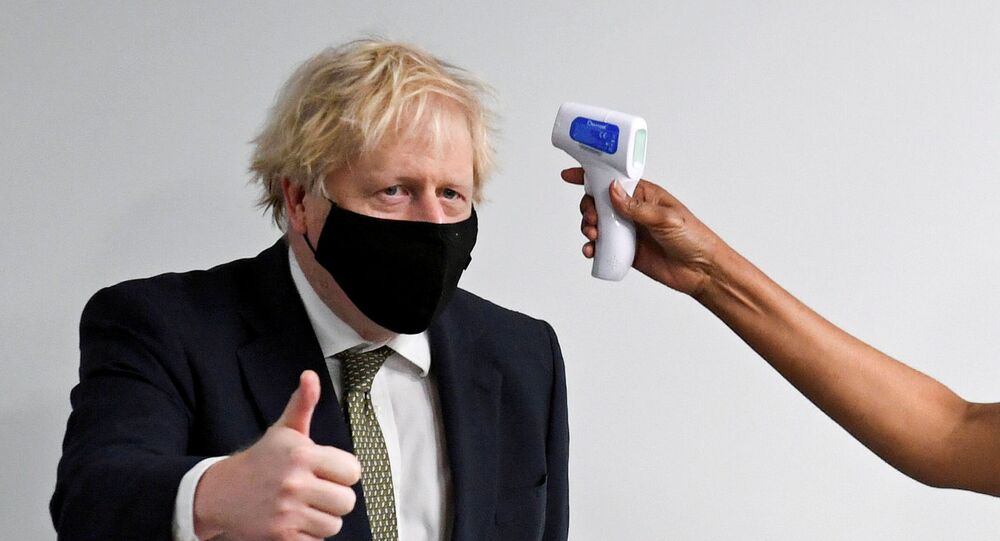 Prime Minister Boris Johnson announced a new, third nationwide lockdown on Monday night, including the closures of schools and all non-essential businesses, in response to soaring infection rates and critical pressure on the National Health Service.

British Prime Minister Boris Johnson has laid out justifications for the third UK COVID-19 lockdown at a Downing Street press conference on Tuesday.

He cited statistics that 2 million people were now infected and hospital admissions were 40 per cent higher than at the peak of the first wave of the pandemic, with Whitty adding that one-in-fifty residents were currently infected with the virus.

The Department of Health said earlier on Tuesday that almost 61,000 new cases of the deadly coronavirus strain had been identified in the last 24 hours, the eighth consecutive day of rising case numbers, and 830 deaths.

Updating the nation on the vaccination programme launched in December, Johnson said: "As of this afternoon, over 1.1 million people have been vaccinated in England and 1.3 million across the UK."

"That includes more than 650,000 people over 80, which is 23 per cent of all the over 80s in England," he added, saying nearly a quarter of the most-vulnerable could have "significant" protection from the virus within four weeks after getting their first of two shots.

And the PM pledged that that 1,000 vaccination centres would be open by next week, and that vaccination statistics would be published daily, not weekly. Inoculation would "put that invisible shield around the elderly and the vulnerable", Johnson stressed.

Johnson expressed "hope" that the measures could be relaxed by mid-February if the majority of the most vulnerable — a target population of 13 million — can get at least one dose of the vaccine.

Whitty said roll-out of the two currently-approved vaccines from Pfizer BioNTech and AstraZeneca would accelerate, blaming a slow start on the strict storage requirements of the Pfizer jab, which must be kept at below 70 degrees centigrade.

And he reiterated the government's new policy of delaying the booster shots for the vaccines until 12 weeks after the first, in order to maximise the number of people receiving at least partial immunity.

Johnson conceded that the roll-out of the AstraZeneca vaccine, given to the first patients on Monday, would be limited by the need to "batch-test" supplies before use. But he promised the government would "ratchet it up over the next days and weeks."

And Whitty stressed that neither of the two vaccines had yet been approved for use in children.

The AstraZeneca jab, developed in Oxford using a chimpanzee adenovirus, has roughly a fifth of the cost of the Pfizer vaccine and is far easier to store, reducing logistical costs as well.

Earlier on Tuesday, Cabinet Office Secretary Michael Gove said the new government "should" be able to start gradually" easing the new, third lockdown in March. But he warned of "very, very difficult weeks ahead", and said restrictions would only be eased "progressively" through the tiers of the pre-existing alert level system, applied county-by-county and city-by-city.

© AP Photo / Jessica Taylor
talkRADIO Banned by YouTube After Airing Criticisms of COVID-19 Lockdown
In his announcement of the new lockdown on Monday night, Johnson said schools would close, except for vulnerable children and those of essential workers, until the end of the end of the half-term holiday in mid-February.

And he said the aim of the lockdown was to buy time for those most at risk from the virus to be vaccinated — stressing that immunisation was the route out of the pandemic.

talkRADIO Banned by YouTube After Airing Criticisms of COVID-19 Lockdown