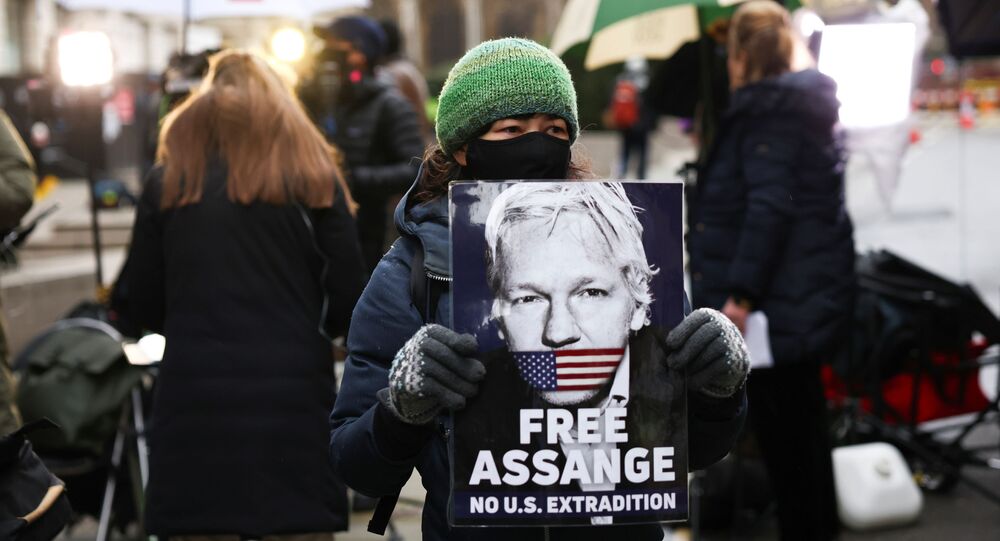 Assange has been awaiting a decision on the US extradition request at the UK's Belmarsh prison for over year and a half. Washington is seeking to prosecute the whistleblower on charges of conspiracy to commit computer intrusion related to WikiLeaks' release of Pentagon war logs and State Department cables.

UK District Judge Vanessa Baraitser has ruled to reject the US request to extradite WikiLeaks founder and whistleblower Julian Assange. Baraitser indicated that extradition would have a harmful effect on Assange's mental health and said she ruled against the US request due to fears that the whistleblower has a high risk of committing suicide as a result.

"I rule it would be unjust to extradite Mr Assange. Faced with conditions of near total isolation […] I am satisfied that the procedures [outlined by US authorities] will not prevent Mr Assange from finding a way to commit suicide", the judge stated.

Judge Baraitser added that Assange had the "intellect and determination'' sufficient to overcome any suicide prevention measures the US authorities might undertake. In the course of extradition hearings, several witnesses indicated that Assange's prison conditions put him at high risk for depression and suicide, and that these issues would likely worsen should the whistleblower be extradited to the US. Psychiatrist Michael Kopelman, who also testified in court, claimed that a razor blade was found hidden in Assange's cell, adding that his patient engaged in thinking about ways of ending his own life.

At the same time, Baraitser refused to defend the WikiLeaks founder's actions that led to his prosecution in the US, saying they are beyond investigative journalism. She also refused to acknowledge the claims by Assange's defence team that his prosecution was Washington's way of punishing him for the publication of documents exposing US wrongdoing in Iraq and Afghanistan.

The US government stated that it intends to appeal the judge's decision. The whistleblower's defence, in turn, said it will be requesting his speedy release from the Belmarsh prison, where he has been kept for over a year and a half.

US Attempts to Prosecute Assange

Assange is wanted in the US on charges of conspiring with Chelsea Manning to commit computer intrusion into the Department of Defence network to steal classified documents, namely Afghan and Iraq war logs and secret Department of State cables. He is also facing a total of 17 charges under the US Espionage Act of 1917 in connection with his release of the logs and cables. Assange faces a sentence of up to 175 years in prison if found guilty on all counts.

In the run-up to the 4 January court decision several prominent activists, politicians, and journalists pleaded with US President Donald Trump, who is soon to leave office, to pardon Julian Assange. Among them are former actress and activist Pamela Anderson, Fox News host Tucker Carlson, another whistleblower, Edward Snowden, and ex-Alaska Governor Sarah Palin. Several media reports claimed that POTUS considered such a possibility, but so far no such plans have been officially announced.

The case against Assange remained sealed for almost a decade, but was revealed soon after the WikiLeaks founder was evicted from the Ecuadorian Embassy in London in April 2019. The whistleblower had been in residence there ever since he was put on bail in 2012 to escape extradition to Sweden over sexual assault allegations.

The WikiLeaks founder dismissed the charges against him in Sweden as fake and argued that they had been designed to have him extradited to the US in the end. The charges were dropped several years after he received asylum in the Ecuadorian Embassy, however, his Swedish accusers unsuccessfully tried to resurrect the case in 2019 upon Assange's removal from the embassy.

Live Updates: Situation Outside London Court as Judge Rules Against Assange's Extradition to US