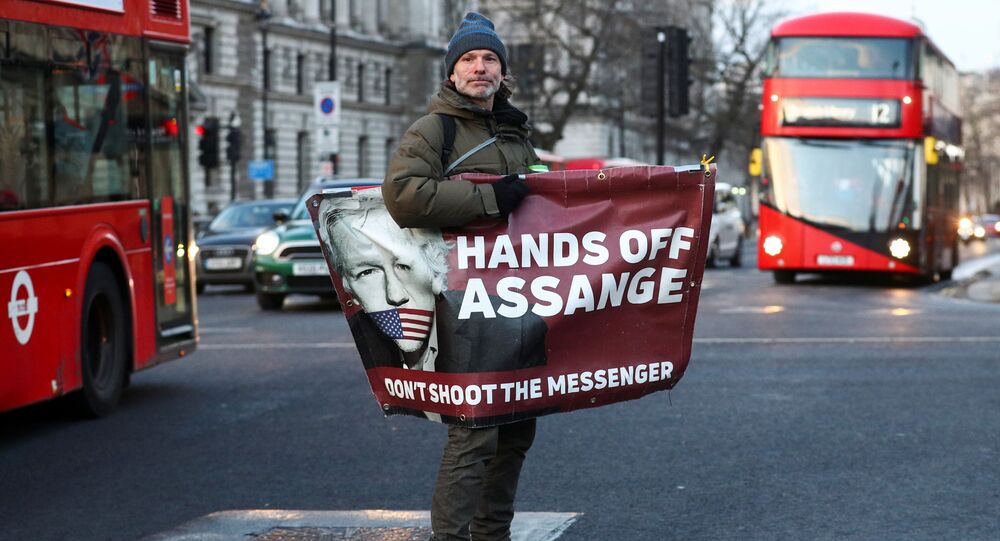 Julian Assange, the founder of WikiLeaks, has been facing accusations of espionage due to his exposure of secret American military documents. Many hope that Trump will grant him a pardon, since the outgoing US president has already pardoned many people in the final days of his administration.

UK District Judge Vanessa Baraitser is to decide the fate of Julian Assange on Monday, 4 January, as the prospect is looming for the Wikileaks founder to be extradited to the United States, where he will face espionage charges, according to AP.

The judge will announce her decision regarding the possible extradition on Monday, 10 a.m., local time, at London’s Old Bailey courthouse.

Assange's legal team has continuously argued that the US prosecution of the Wikileaks founder is “extraordinary, unprecedented and politicized”, and constitutes “a flagrant denial of his right to freedom of expression and poses a fundamental threat to the freedom of the press throughout the world.”

According to his defenders, Assange is suffering from wide-range of mental health issues, particularly suicidal tendencies, which worsen if he is placed in an American prison. His lawyers allege that he is likely to be placed into the notorious ADX Supermax prison in Colorado - a facility hosting such criminals as Unabomber Ted Kaczynski and Mexican druglord Joaquin 'El Chapo' Guzman.

The US government argues that the issues raised by Assange's team are "non-justiciable" in the proceeding.

“Consistently, the defense asks this court to make findings, or act upon the submission, that the United States of America is guilty of torture, war crimes, murder, breaches of diplomatic and international law and that the United States of America is ‘a lawless state’,” they said, cited by The Associated Press. “These submissions are not only non-justiciable in these proceedings but should never have been made.”

Several prominent figures, such as Chinese artist Ai Weiwei, actress Pamela Anderson and former Republican VP candidate Sarah Palin, have called on Trump to pardon Assange, as the outgoing president has recently rolled out many pardons.

© Photo : Mohamed Elmaazi
Assange with US flag covering his mouth outside Old Bailey on 29 September 2020

However, Trump's pardons have been roundly critised, as among those pardoned are Republican allies that could face charges after Trump leaves office as well as military contractors for the Blackwater company who were convicted in the shooting of unarmed Iraqi civilians in Baghdad in 2007.

After the wave of Trump presidential pardons, calls have reportedly emerged to not only give clemency to the Wikileaks founder, but also to Edward Snowden, a former NSA contractor who, like Assange, faces espionage charges for leaking classified documents documenting the illegal activities of US security infrastructure.

The founder of WikiLeaks is facing a potential 175-year prison sentence as Washington seeks his extradition on 17 espionage charges and one count of computer misuse, after WikiLeaks released a trove of classified US military documents ten years ago.

The leak, dubbed the largest in history, contained hundreds of thousands of diplomatic cables and files exposing war crimes committed by US troops during military operations in Afghanistan and Iraq.

WikiLeaks founder is currently awaiting his trial in the UK, after he was arrested in 2019 by Metropolitan Police following Equador revoking his political asylum he was granted in 2012.

Assange's confinement has been condemned by the United Nations, with UN Special Rapporteur on torture and other cruel, inhuman or degrading treatment or punishment, Nils Melzer, joining calls to pardon Assange.