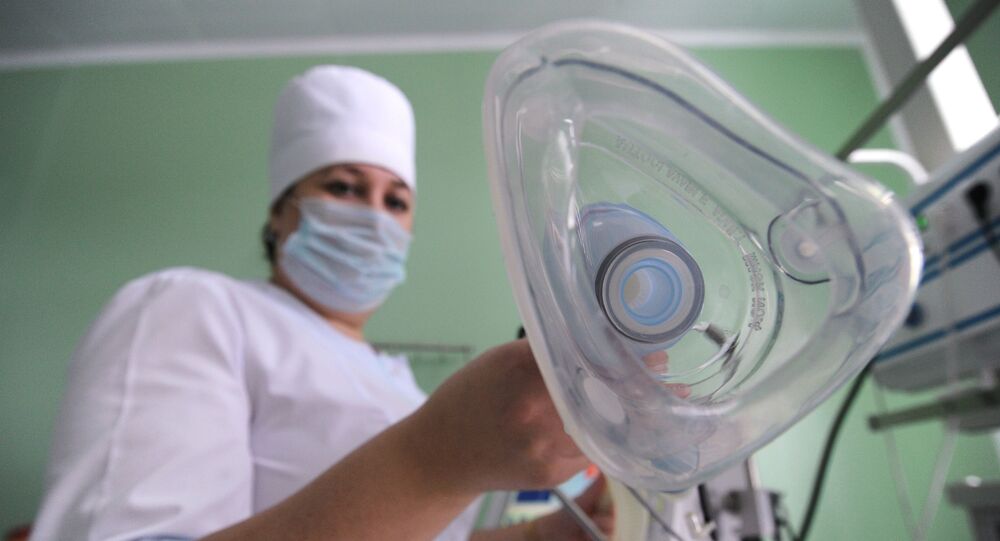 A London hospital earlier declared a major incident, turning away some emergency patients on Sunday over fears that an influx of coronavirus patients might result in a shortage in oxygen as London struggles with a surge in new COVID-19 infections.

Amid soaring coronavirus cases in the UK capital another National Health Service trust has urgently warned that dwindling oxygen supplies are presenting a "ticking time bomb", writes The Independent.

"It is a ticking time bomb. We are shuttling patients between sites to keep people safe using dedicated critical care transfer teams", a senior NHS source was reported as saying.

Currently approximately 200 patients are using oxygen at the hospital, consuming 2,400 litres of oxygen a minute, while typical use is around 1,000 litres a minute. Alarm has been triggered as the Trust says its oxygen supply system has a limit of 3,000. Any surge beyond that might cause the system to fail.

The acute problem of oxygen demand by COVID-19 patients has been challenging for other hospitals as well, as concerns are voiced that it is more than the hospital piping is designed to deliver.

An attempt was made to allay concerns, as Dr Emma Whicher, medical director at the North Middlesex Hospital, informed staff that patient safety would be maintained even if oxygen levels were reduced marginally.

A hospital-wide cut down in use of oxygen is being implemented, reducing target saturation for adults to between 90 and 94 percent, as compared to the normal oxygen rate of above 95 percent.

As part of the measures to deal with the looming shortages, clinicians have been instructed to carry out a daily review of patients' use of oxygen, ensuring that unused oxygen is turned off.

"Once again a surge in COVID-19 patients is putting a strain on oxygen and this is something all staff can help with".

On Monday, the 500-bed Queen Elizabeth Hospital in Woolwich, southeast London, and part of the Lewisham and Greenwich NHS Trust, revealed it had declared a major incident over oxygen flow fears.

The soaring number of new coronavirus admissions had forced it to divert emergency patients to other hospitals to avoid overwhelming its system. Senior clinicians in London were cited by the outlet as revealing that similar challenges were experienced across the city, forcing regional NHS leaders to brainstorm the issue daily.

"It is being discussed three times daily with NHS England. We have known this was a problem for a while and there is no end in sight with the infections rising but everything is being done too late at a strategic level. The decision-making by NHS England is weeks behind where we need it to be. It is very difficult to understand who is accountable at a regional and national level", concerned NHS bosses were cited as saying.

London registered a peak in coronavirus cases, with 5,371 patients in hospital on 29 December, compared with 5,201 on 8 April.

Patients across London are being shuttled between hospitals, as the surge has led to operations being cancelled and staff redeployed to makeshift critical care wards.

During the spring wave of coronavirus cases, NHS England had warned of surging demand for oxygen at hospitals, where patients were diverted after systems failed. Watford General Hospital was a case in point, shutting its Accident & Emergency department in April.

The challenges during the first wave had led NHS England to invested £15 million on improvement works at some hospitals. Fire risks have also been cited due to high levels of"‘ambient oxygen" in the air.

In the wake of the report, a North Middlesex University Hospital spokesperson said:

"As with all hospitals across the country, we are treating a rising number of people with COVID-19 who need oxygen to support their breathing, but we have robust plans in place to preserve oxygen and keep patients safe".

There has not been any official comment from NHS England's London regional team.

'Eye of the Storm'

Health chiefs in the country blamed the rise on a new coronavirus strain, with more patients in hospital in England than during the initial peak of the outbreak in April.

Now that the AstraZeneca/Oxford University #COVID19 #vaccine has been approved, we're working with the NHS in England, Scotland & NI to distribute it across the UK.

​The EU health agency ECDC also warned on 29 December that the risk is high the newly discovered COVID-19 variants could further strain healthcare because of "increased transmissibility".

"And now again we are back in the eye of the storm with a second wave of coronavirus sweeping Europe and, indeed, this country", said the head of NHS England Sir Simon Stevens in a message recorded at a COVID-19 vaccination centre.

The coronavirus (COVID-19) vaccine is safe and effective. It gives you the best protection against coronavirus.

Keep up to date on the NHS website ⬇️https://t.co/CBC8Ru9r2l

While hailing the rollout of vaccinations as extending a much-needed "chink of hope" for 2021, the NHS England chief executive cited fears that the health system may become overwhelmed, adding that 2020 was "the toughest year most of us can remember".

‘Sometimes the worst circumstances bring out the best in people.’

NHS Chief Executive Sir Simon Stevens reflects on how the toughest year has shown the best of the NHS, his praise for the remarkable staff and great sense of hope for the new year. #ThankYouNHS pic.twitter.com/GoEd9k25Gu