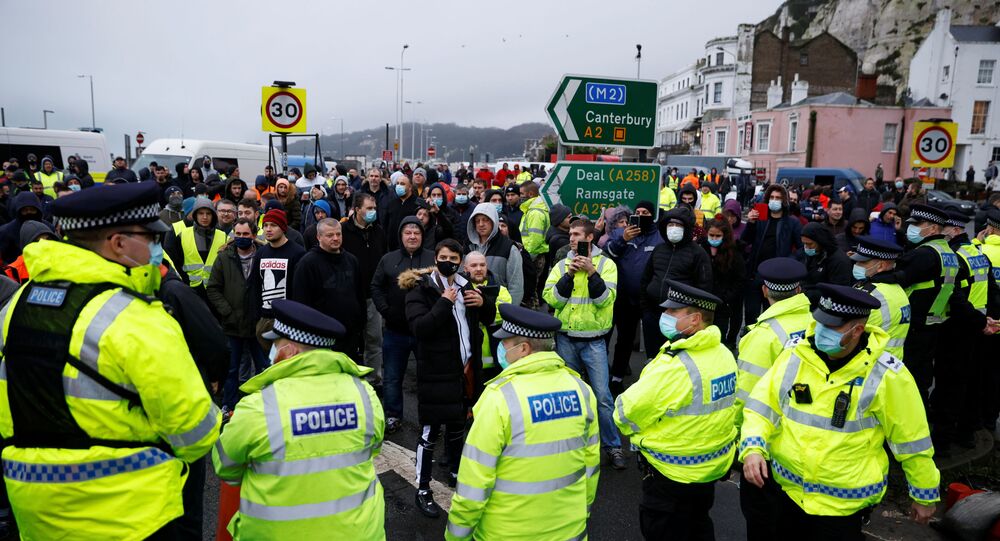 France closed its borders with the UK on Sunday night following reports about the new strain of COVID detected in Great Britain. The ban has caused enormous queues near ports in Kent; the situation has been exacerbated by the Christmas season and uncertainty over the Brexit deal.

Drivers left stuck outside the English port of Dover entered a confrontation with policemen on Wednesday, over demands to cross into France, which earlier banned all travellers and freight from the UK after a mutated strain of coronavirus was found in the country.

The videos from the scene circulating in the media show how frustrated truckers have been pushing and assaulting officers stationed at port while attempting to make their way to Europe. No injuries or victims were immediately reported from the scene.

Reports suggest that many drivers who have become stuck in southern England for days are from Europe. The border closure means that they are risking not being able to reach their families in time for the Christmas holiday, even when the travel ban introduced by France and other countries is lifted, as queues at Kent ports have become enormous.

It has been estimated by the Road Haulage Association that nearly 10,000 lorries have become stuck at Dover port, meaning that it could take nearly a week to clear the road.

Kent Police earlier announced that they would launch "Operation Stack" between the 8 and 11 Junctions of the M20 motorway to alleviate possible traffic jams along the country’s roads. But according to eyewitnesses, the plan "clearly" was not working, as severe gridlock was observed not only on the highway but also in the city of Dover.

It’s quite clearly not working. This is Snargate St. in Dover about 40 minutes ago. The town is also gridlocked and there’s not a policeman in sight. pic.twitter.com/Ze9D2H1emU

Last week, UK health officials announced that they had detected a new strain of coronavirus, dubbed VUI-202012/01, which potentially has a higher transmission rate that the original virus, due to a mutation in its spike protein. The news has prompted a call from Paris to close the borders with the country for 48 hours; other countries, such as Germany and Belgium, have also shut down all travel from the UK.

© REUTERS / PETER CZIBORRA
A lorry is seen near a sign at the entrance to the Port of Dover, as EU countries impose a travel ban from the UK following the coronavirus disease (COVID-19) outbreak, in Dover, Britain, December 22, 2020

On 22 December, UK Transport Secretary Grant Shapps said that Britain and France had now agreed to implement a protocol to reopen the French border on Wednesday for "those travelling for urgent reasons, provided they have a certified negative COVID test".

His French counterpart Jean-Baptiste Djebarri said late Tuesday that Eurostar trains, boats and air travel between the two countries would "resume service as of tomorrow morning".

It was reported on Wednesday that France has now relaxed the two-day blockade, with passengers and freight starting to arrive at the French port of Calais from the UK. However, the French, British and EU authorities agreed on Tuesday that those seeking to cross the border between the two countries must test negative for COVID, including the new strain of the virus.