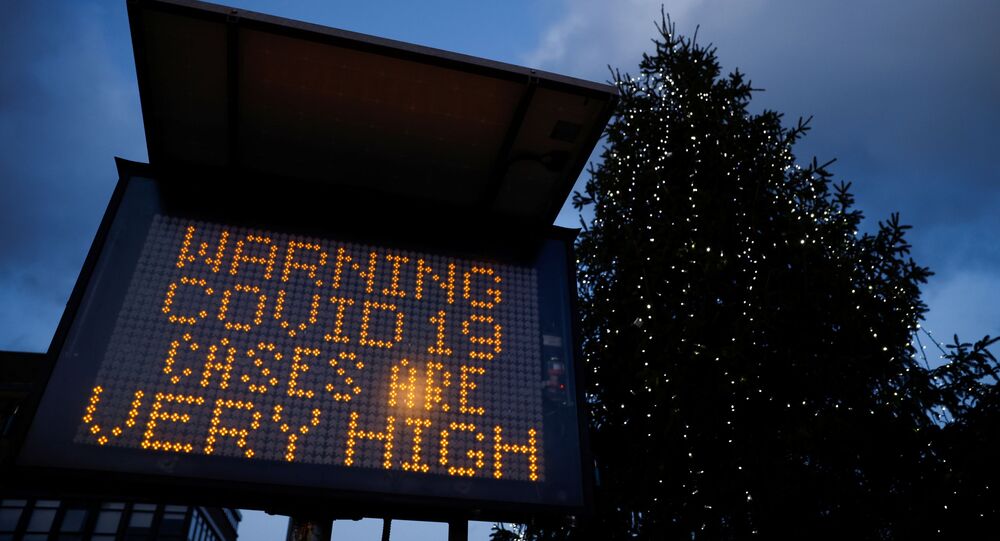 Britain recorded 691 coronavirus deaths on Tuesday - the second highest daily toll since May, as the pandemic is further compounded by the discovery of a new highly contagious virus strain in the country, leading Downing Street to impose a strict lockdown on London and nearby areas while around 40 countries have restricted flights from the UK.

Cabinet ministers are considering applying the toughest coronavirus conditions to more areas of the UK as soon as 26 December, reports The Times.

UK Prime Minister Boris Johnson had previously skirted the issue of whether the next review date for the COVID-19 alert level tiers could be brought forward from 30 December as he addressed reporters at a press conference on 21 December. However, on Wednesday, government ministers are expected to agree upon which areas may need further controls to curb the spread of the respiratory disease, according to sources cited by the outlet.

Decisions to move areas from Tier 3 to Tier 4 were expected to be taken at a meeting of the “Covid-O” cabinet sub-committee, to enable them to be implemented during the coming weekend.

Areas believed to be facing impending harsher restrictions are West Sussex and the remaining parts of East Sussex that have so far escaped being designated Tier 4, the highest category.

Suggested to be similarly under threat are parts of the North and Midlands such as Rugby, Burnley, Lincoln and Stoke-on-Trent.

Furthermore, Whitehall sources were cited by The Telegraph as revealing that there was now "a high chance" that the country would be placed into a third lockdown after Christmas.

"Changes are expected, including in some areas that are currently on the margins and edges of Tier 4 areas. We're concerned that some areas have had significant increases in case numbers as a result of the mutation," a Government source was quoted as saying by the publication.

While currently Downing Street preferred to extend the use of Tier 4, claimed sources, "there comes a point where it doesn't make much sense to stick with it".

"The expectation now is that we can get through Christmas, but after that the chances of a full lockdown in the New Year look pretty high," the insiders reportedly claimed.

On Monday Sir Patrick Vallance, the country’s chief scientific adviser, emphasized the importance of tougher restrictions to stop the rapidly spreading new variant of the coronavirus.

“I think it’s likely, therefore, that measures will need to be increased in some places in due course, not reduced,” he said.

Health officials have also said that areas poised on the borders of the current tiers are particularly vulnerable, as the mutant new variant of the respiratory disease was "bleeding" across the boundaries.

The strain, which goes by the name B.1.1.7, appears to be better at spreading between people.

Last week UK authorities announced that the mutated coronavirus strain can be transmitted up to 70 per cent faster, according to preliminary research. The news forced many countries to ban the entry of people arriving from Britain as a precaution.

In the UK, Cumbria, Devon, large parts of Sussex, Surrey, Essex and Norfolk, just beyond the borders of the current Tier 4, have all reported hotspots of the mutation, after large numbers of people fled Tier 4 areas into the Midlands and the North.

On Wednesday Matt Hancock, Secretary of State for Health and Social Care, will reportedly announce another 17 local council areas across England have taken up offers to use the devices. Tens of millions of the devices are stored in warehouses, with hundreds of millions on order, and were suggested by ministers as a measure to help regions exit tougher lockdowns.

However, while the tests have been shown to work in picking up the new variant as well as older strains, but they are less accurate than the gold-standard PCR diagnostic method.

Labour leader Keir Starmer said that his party would back the government if scientists called for tougher regulations in response to the new virus strain in the country.

In a letter to the prime minister he called for recommendations by the Scientific Advisory Group for Emergencies to be published promptly, accompanied by a plan for rolling out vaccines “as quickly as possible”.