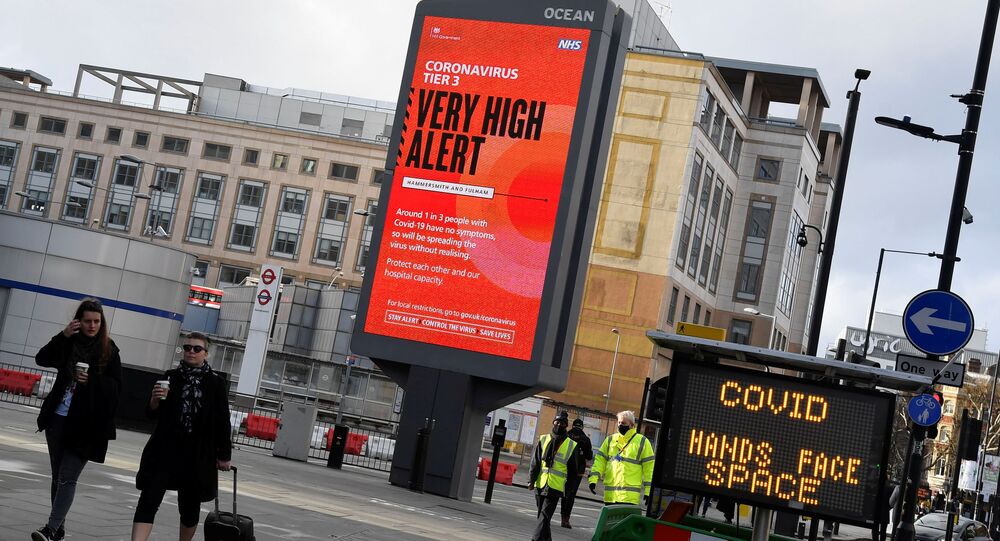 Leaked details of PM Boris Johnson's press conference indicate a lockdown in all but name for London and the South-East of England, with residents ordered to "stay home" and three-household family "bubbles" for Christmas cancelled.

British Prime Minister Johnson has announced that London and parts of Southeast England will go into new tier 4 level of COVID-19 restrictions amid the spread of the new variant of the disease.

Greater London, Kent, Essex, the coastal city of Portsmouth in Hampshire and some other towns would now enter a new, stricter fourth tier of the existing alert level system of area-by-area restrictions.

Johnson said a recently-identified new strain of coronavirus could be "70 per cent more transmissible" than the original COVID-19 variant. But he insisted there was "no evidence" the new strain was more lethal or that vaccines were less effective at protecting against it.

He announced new restrictions for the worst-affected areas, "broadly" equivalent to the November lockdown, with gyms and other non-essential businesses closed from Sunday morning.

England is already divided into three tiers or alert levels, depending on the level of COVID-19 infections in each.

"People should not enter or leave tier-four areas and tier-four residents must not stay overnight away from home," Johnson stressed, and could only meet one member of another household "in an outdoor space."

But "communal worship" - church and other religious services - would still be allowed. Jonson also repeated previous calls for people to work from home "where possible", with the exception of those such as construction workers. And he added that the rules would be subject to regular reviews, with the first set for December 30.

Johnson warned that while the new strain was concentrated in the newly-designated tier-four areas, it was also present at lower rates across the country.

Turning to festive celebrations, Johnson said it was "with a very heavy heart" that he had to announce "we cannot continue with Christmas as planned." The previously-announced five-day Christmas window for up to three different homes could celebrate together indoors would be cancelled in the new tier-four areas, and reduced to Christmas Day only elsewhere.

The devolved governments of Wales and Scotland had already put restrictions on those temporary freedoms.

But Johnson said there would be no change to rules for "support bubbles", where a person from one household can visit and care for a vulnerable person at another address.

And he warned would-be New Year's Eve revellers that there would be no relaxation of the rules on December 31.

"I know how disappointing this will be" Johnson said, but insisted that "when the science changes, we must change our response."

But he said there was "real hope" that the virus would soon be eradicated through vaccination, urging anyone called by the NHS to have the jab top do so - joining the 350,000 nationwide who had already had their first of two doses.

She said a new fourth tier would be added to the existing alert level system. London and most of the south-east is already under tier three restrictions, which pubs shut and restaurants only allowed to sell takeaways.

The new rules for the capital would add up to a third lockdown in all but name.