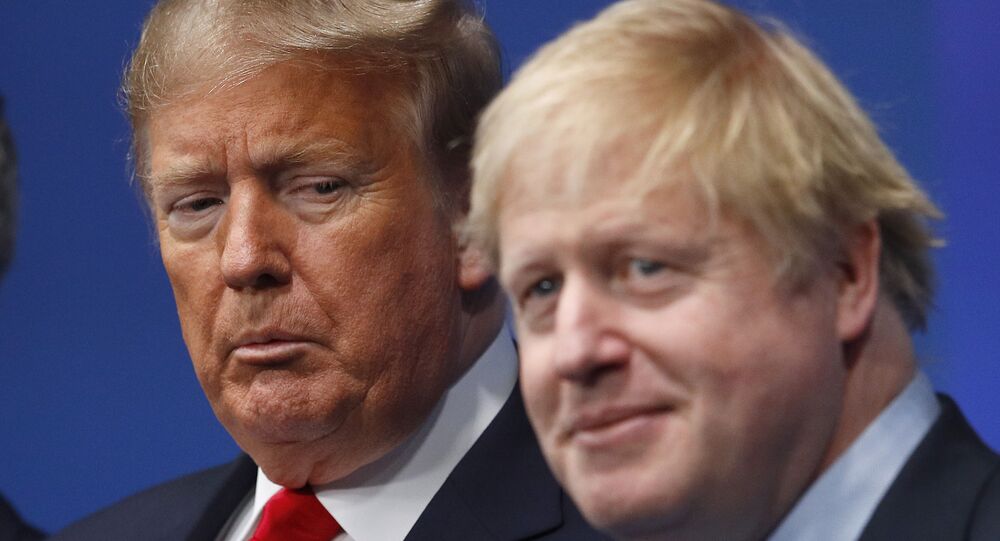 What's Behind UK-US 'Mini Trade Deal' & Will It Pave the Way to Broader Free Trade Agreement?

The "mini-deal" that is reportedly being considered by the Johnson government and Trump administration is mostly of a symbolic nature, say British economists, outlining what benefits No 10 could reap from the trade manoeuvre.

On Wednesday, US Trade Representative Robert Lighthizer told the BBC that the US and UK are mulling over a "mini-deal" envisaging a reduction in US punitive tariffs on Scottish whisky and cashmere in response to London's decision to drop tariffs against Washington over subsidies for Boeing.

On 9 December, International Trade Secretary Liz Truss announced that the UK would drop 25% tariffs slapped by the EU on $4 billion worth of US goods in November. The move, which will come into force on 1 January 2021, is aimed at paving the way to a post-Brexit trade agreement between the UK and US.

UK Striving to Do a "Mini-Deal" With Trump Administration

The Boris Johnson government is scrabbling to reach a “mini-deal” with the US prior to the Trump administration's stepping down, notes Professor Alex de Ruyter, regional economist at Birmingham City University and director of the Centre for Brexit Studies.

"It would not be surprising if this turns out to be the case – the Trump and Johnson administrations are on good terms and share some significant commonalities", the professor points out. "It is widely anticipated that Joe Biden’s incoming administration would be somewhat less amenable to doing a deal with the UK and is likely to prioritise rebuilding relations with the EU".

Earlier this month, Joe Biden specified in an interview with The New York Times that his administration would not rush to strike any trade agreements until it bolsters investment in US manufacturing and the protection of the country's workers: “I’m not going to enter any new trade agreement with anybody until we have made major investments here at home and in our workers and in education”, he said.

The reported UK-US "mini-deal" is likely to be very limited, dealing with the punitive duties imposed on several UK exports as part of one of the ongoing Airbus-Boeing disputes at the WTO, de Ruyter explains.

"This, it should be noted, is not a free trade agreement (FTA) – all standard (WTO) tariffs would remain, but the punitive tariffs permitted by the WTO because of this finding, would be dropped", he highlights.

Generally, the Johnson government could reap two major benefits from dropping the tariffs, according to the academic:

·         First, since some of the most high profile punitive tariffs are on Scottish products (most notably whisky – a highly lucrative export), No 10's move would be "a PR coup for the Johnson administration when arguing against Scottish independence".

·         Second, any agreement would be packaged by the Johnson administration and its supporters in the press as a “deal”, obfuscating the fact that such an agreement bears little resemblance to a true FTA.

Chief Executive of the Scotch Whisky Association Karen Betts has already hailed the initiative in an official statement, lamenting the fact that the US punitive tariffs have done a tremendous damage to the industry over the last 14 months and resulted in losses of over £400 million.

Gains From US Deals Will Be Smaller Than Expected

The gains from a deal with the US would be smaller than people are expecting, believes Jun Du, professor of economics at Aston Business School and director of the Lloyds Banking Group Centre for Business Prosperity.

"In terms of goods, there is a very limited scope and scale for further tariff reduction", she says. "Large gains might be possible from movement towards more liberalisation on service trade, but the negotiation would be very challenging and requires some framework change and long-term efforts in harmonisation".

The UK's drift towards making a deal with the US is in fact an attempt to diverge from EU trade policy, the professor elaborates. However, no matter how strong London's desire to withdraw from the European economic bloc is, the union will remain far more important for the UK than North America, or emerging economies and Commonwealth countries, argues Jun Du.

"The question is not about if this move was right or wrong, but about if what the UK could get out of a potential deal with the US might compensate (at least to some extent) what it loses from the EU. My impression is that it is almost impossible", she suggests.

UK Will Have Weaker Bargaining Position While Trading on Its Own

No 10 is currently involved in the final phase of UK-EU talks over the post-Brexit agreement. Both sides are striving to agree a trade deal by 31 December, which is an official deadline of the UK's transition period. If no agreement is reached between Britain and the European bloc, they will trade under WTO rules. While EU chief negotiator Michel Bernard Barnier has recently stated that he believes a deal will be struck, UK Prime Minister Boris Johnson has made it clear to his Cabinet that London wants a deal with the EU, but not "at any cost".

"Whether the UK will leave the EU on 31 December this year with a trade deal or without, it is in the process of forging ahead with its own set of free trade deals around the world, including Japan and the US amongst others", says Andreas Bieler, professor of political economy at the School of Politics and International Relations at the University of Nottingham.

While the British government is pinning its hopes on "opening up additional trade links being no longer constrained by EU trade policy", it may face serious challenges, according to Bieler, who suggests that the UK will have a weaker bargaining position than the entire EU bloc.