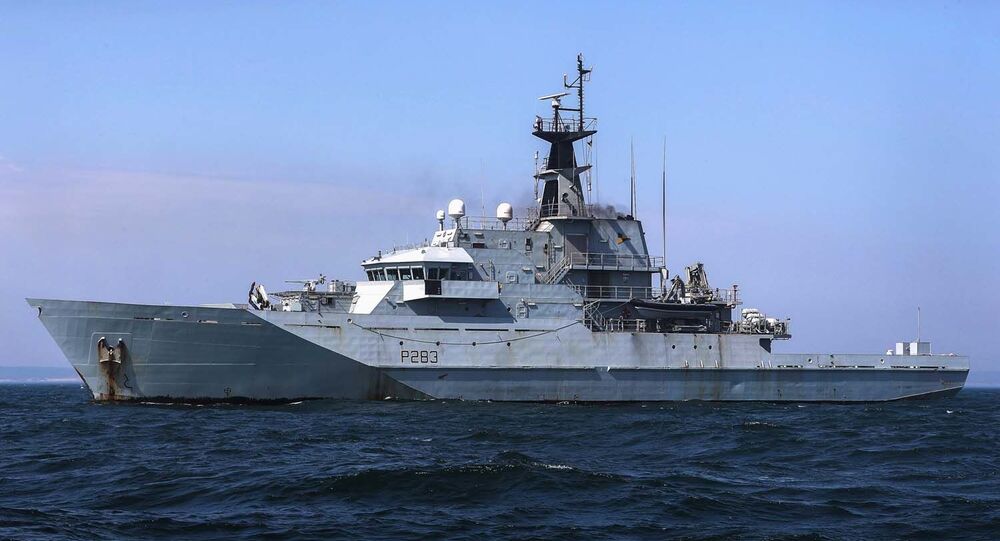 In the 1960s and 1970s the boot was on the other foot and British fishermen were the ones encroaching on Iceland’s waters. The dispute led to the so-called Cod Wars.

Four Royal Navy patrol boats have been placed on standby amid fears a trade deal will not be agreed between Britain and the European Union.

The British government says the River Class patrol boats - which are 90 metres long, have a top speed of 24 knots and a single Oerlikon 30mm gun - will be deployed in the event the transition period ends without a deal.

Thoroughly ashamed of our government who value fish stocks above human life.#codwars #Safepassageforrefugees

​Under the Brexit withdrawal deal, the UK will exit the Common Fisheries Policy on 31 December 2020.

Britain entered the CFP in 1983 but its fishing fleet had already suffered a major political defeat six years earlier.

British fishermen - especially from the port of Grimsby on the east coast of England and Fleetwood in the Irish Sea - had for decades caught much of their best cod in the hostile waters south of Iceland.

Cod was incredibly popular in Britain, along with haddock, for making fish and chips.

The Cod Wars.
Damage to HMS Falmouth by Tyr, an Icelandic gunboat. pic.twitter.com/yly49fubBc

​Although the 1940s, 50s and 60s are seen as the golden era for ports like Grimsby, the life of a trawlerman was grim.

In February Nick Triplow, author of Distant Water, told Sputnik: “There's a romanticised version of the fishing industry that's sold to people, but by all accounts it was tough, dangerous, often poorly-paid work. The mortality rate was something like 14 times that of coal mining. I'm not sure those 'glories' were ever so glorious.”

Britain and Iceland had already had two “cod wars” in the 1958-61 and 1972-73, after Reykjavik arbitrarily increased the size of its exclusive zone from four to 12 nautical miles.

Being old enough to remember Cod Wars with Iceland (NO -not the supermarket!) I'm looking forward to the 1st English frigate to barge a French fishing trawler out of our territorial waters! #NoDeal "They seek fish here, they seek fish there: those Frenchies seek fish everywhere". pic.twitter.com/pgSaEunCcb

​Royal Navy warships were often called upon to protect British fishing boats from being rammed by Icelandic gunboats.

In October 1975 Reykjavik decided to increase its protected waters to a 200 mile zone around Iceland, effectively cutting off British and German fishermen from their best catch.

The third Cod War was the most violent of them all with Royal Navy vessels ramming Icelandic ships 17 times between December 1975 and February 1976.

On 8 January 1976 the Icelandic cabinet passed a resolution: “The Icelandic government considers it inevitable that a continuation of deliberate ramming by British warships on Icelandic coastguard vessels will lead to severing of diplomatic relations with Great Britain.”

NATO was concerned because Iceland and Britain were both members who held strategic positions in the North Atlantic and the Secretary General, Joseph Luns, visited Reykjavik and put pressure on Britain’s Labour government too.

Ironically Britain’s Foreign Secretary at the time was Anthony Crosland, who just happened to be the MP for Grimsby.

Crosland led a British delegation which finally hammered out an agreement with Iceland in November 1976.

Under the agreement Britain was limited to landing 50,000 tons of Icelandic fish a year and only 24 out of 93 trawlers were allowed to fish at any one time.

It was seen as a complete surrender by the Grimsby and Fleetwood fishing crews.

Crosland, an Oxford-educated southerner, suddenly became persona non grata in his own constituency and Labour feared he would be voted out at the next election.

But in January 1977 Crosland died of a brain haemorrhage and Austin Mitchell replaced him as MP.

After the Cod Wars, Grimsby’s fishing fleet was decimated and the town has never recovered economically.

The protection of the waters around Britain have been a key sticking point in the talks between David Frost and Michel Barnier.

Ironically the Daily Mail reported this week that a Dutch ship, the 390-foot long Frank Bonefaas, controls 23 percent of England’s fishing quota and lands its entire catch in the port of Ijmuiden in the Netherlands.

France insists European trawlers would have to be allowed continued access to UK waters.

Boris Johnson said “taking back control” of Britain’s waters was a key objective after Brexit and in July 2017 Michael Gove, the Secretary of State for Environment, Food and Rural Affairs, said the UK would also leave the London Fisheries Convention, which was signed in 1964 and allows British, French, Irish, Belgian, Dutch and German vessels to fish within six and 12 miles of each other’s coasts.

But are Johnson, Gove and Defence Secretary Ben Wallace really willing to send the Royal Navy into battle against Irish, French, Belgian, Dutch, German, Spanish and Danish trawlers and trigger a diplomatic incident?