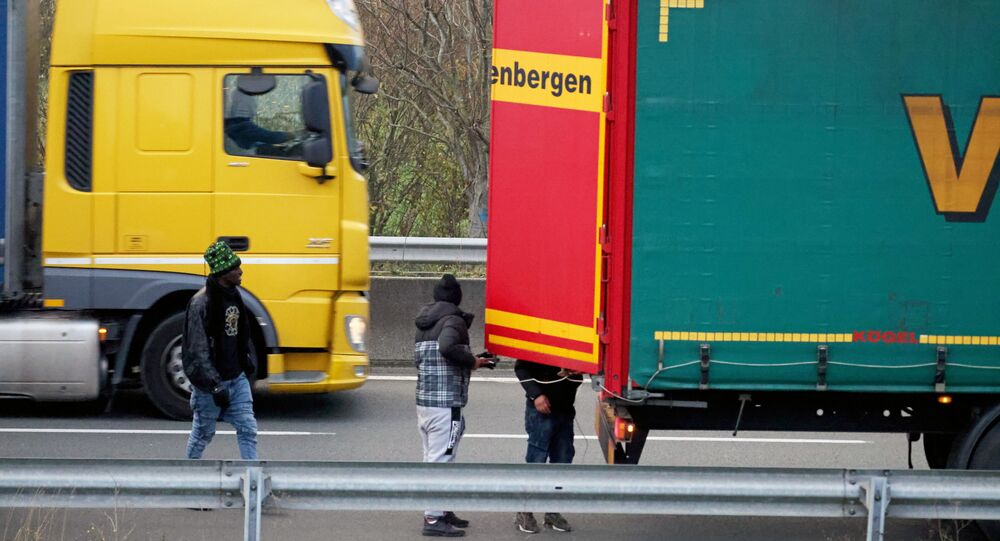 Road Haulage Association spokesman Paul Mummery said the recent attacks on two lorry drivers around the northern French port of Calais were part of a pattern of "intimidation" by illegal immigrants looking to stow away in vehicles crossing the English channel.

British truckers have been attacked and injured by illegal immigrants trying to stow away on lorries near the French port of Calais.

The UK's Daily Mail and Daily Telegraph quoted two drivers who had been attacked in separate incidents around the northern French city, where immigrants have camped out for decades in their attempts to enter the UK illegally.

A 57-year-old driver Andy Couper was left with blood pouring from his face after assailants smashed the cab window of his lorry with a brick - then mocked him with impunity.

"Someone hit the truck" and the "whole passenger window" was broken, said Couper. He looked down and saw "15 of them laughing at me."

He drove off slowly, sounding his horn to attract attention and help, "but there are no police", the driver said. Couper said immigrants were "running riot" around Calais, warning: "one day someone will get killed."

And a video showed migrants trying to stow away in the back of a lorry stopped on a road near the port, then throwing objects at Greg West, the driver of the truck behind, as he recorded the incident.

British lorry driver attacked by a group of migrants in Calais pic.twitter.com/udCqN1Xsnd

"Welcome to the daily Calais grind, if you want to know why we don't care too much for these people in our country here is a good reason why," West wrote as he posted the video on Facebook.

Photos tweeted by the UK's Road Haulage Association (RHA) and journalists showed Couper's bloodied face after the attack at 3am on Friday December 4. The RHA asked if it would take the death of one of its members' employees before French authorities take action against the immigrants

​In fact, attempts by illegal immigrants to stow away on lorries have already had deadly consequences. In June 2017 a Polish van driver died horrifically when he hit a barricade of logs set on the A16 road at Guemps, 10 miles from Calais. The vehicle burst into flames and the body of the man, later identified only as Miroslaw I., was burnt beyond recognition. Two Afghan and two Eritrean suspects were arrested and charged with manslaughter, endangering lives and impeding traffic.

RHA press executive Paul Mummery said there had been an "upsurge" in such incidents amid "more desperation" by migrants who beleive it will be harder to enter the UK covertly once the post-Brexit transition period ends. He said the attacks are part of a strategy of "intimidation" against drivers to force them to let illegal immigrants hide in their lorries as they cross the channel to the UK.

© REUTERS / PASCAL ROSSIGNOL
Migrants stand on roadside in hope of hiding inside trucks in Calais
Parliament Live TV
Priti Patel Warned Of the ‘Dubious Legality’ Of ‘Morally Repugnant’ Prosecution of Migrants
Eamonn Harrison and three other alleged members of a people-trafficking ring are on trial in the UK for charges including manslaughter over the deaths of 39 Vietnamese immigrants, who were found suffocated in the back of his truck in Essex in 2019. Northern Irish trucker Maurice Robinson, who drove the vehicle, has already pleaded guilty.

In October, both parents and two children from an Iranian family were found drowned when their boat capsized while trying to cross the English channel. Their 15-month-old daughter was also presumed dead, but her body was never found. In August a young Sudanese man drowned trying to cross the channel.

Some 8,500 illegal immigrants are estimated to have entered the UK so far this year, up from 1,850 in 2019. In November UK Home Secretary Priti Patel announced £28 million in funding to French authorities to stop more people-trafficking across the channel.