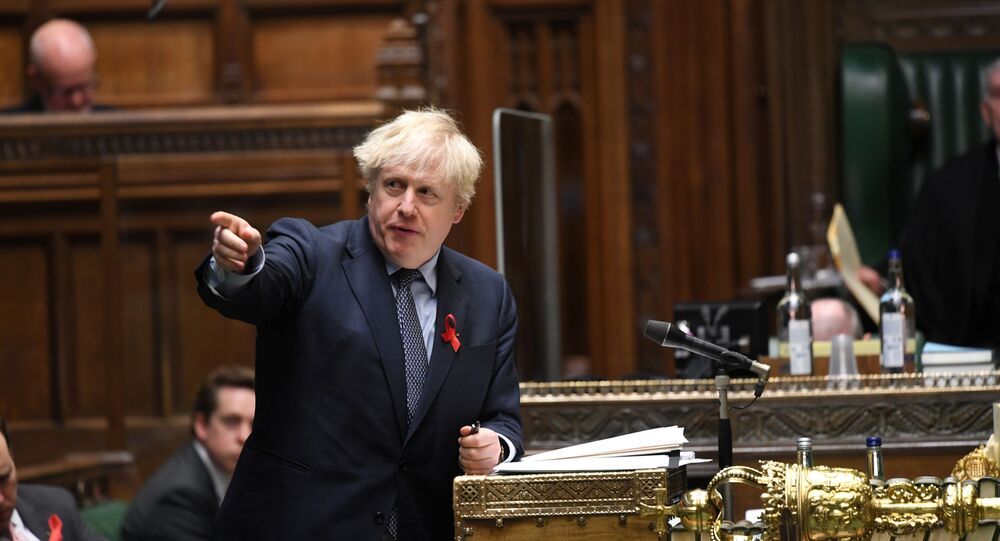 Post-Brexit Britain and the European bloc have been in tense talks over the past several weeks on economic arrangements that will apply across the respective countries once the so-called transition period expires on 31 December.

Speaking to MPs about the prospects of post-Brexit arrangements with the EU, British Prime Minister Boris Johnson has asserted that "a good deal is still there to be done".

"We already had an oven ready deal which was the withdrawal agreement - a very good deal" the head of the British government went on, stressing that the UK will prosper irrespective of whether a new accord comes along.

Johnson insisted that no British PM could sign up to the demands the European Union is "currently insisting on", adding that while there is a trade deal to be done, the country would prosper without one.

"And secondly, they are saying that the UK should be the only country in the world not to have sovereign control over its fishing waters. And I don't believe that those are terms that any prime minister of this country should accept”, the prime minister continued, adding that starting from 1 January, the UK would by all means "prosper mightily", including Scotland who will "take back control of its fish".

"This country will be ready for whether we have a Canadian or an Australian solution, and there will be jobs created in this country, throughout the whole of the UK, not just in spite of Brexit, but because of Brexit", Johnson promised, referring to the specific trade deal that the EU has with Canada, while Australia has none.

After frantic talks in London bore no fruit, Boris Johnson is expected to head to Brussels for talks with European Commission President Ursula von der Leyen in a bid to avert a no-deal Brexit, as "significant differences" remain between the UK and the EU on critical issues despite the end of the transition period looming large, a recent BBC report has it, albeit not giving any specific date.

Michel Barnier, meanwhile, told MEPs the deadline for talks succeeding was Wednesday, the eve of the last EU leaders' summit of the year in Brussels, slated for 10-11 December, with concerns increasingly voiced by both UK and EU negotiators that no deal whatsoever would be struck given the tight time framework.

Last week, the British side, for instance, reportedly accused Brussels of revising their conditions at the last moment, which, officials said, would certainly further jeopardise the recently resumed talks that were put on hold some time ago due to the galloping coronavirus epidemic.

© AFP 2020 / TOLGA AKMEN
EU chief negotiator Michel Barnier (L), wearing a protective face covering to combat the spread of the coronavirus, walks to a conference centre in central London on December 2, 2020 as talks continue on a trade deal between the EU and the UK.

A new accord will have to be approved by the EU's 27 member states and various European parliaments, as well as Britain's by 31 December, when the UK's transition period is over. What puts a spoke in the negotiations' wheel, as per the EU and a number of British officials, is the Internal Market Bill, which Johnson introduced in September. It proposes rolling back some of the commitments on state aid and customs checks on goods entering Northern Ireland.

Prior to Johnson's phone conversation with the EU chief, the UK said it was going to revoke clauses in the Internal Market Bill, with the statement coming in anticipation of the clauses being added back into the bill by the House of Commons.

In the case of a no-deal scenario, border checks and taxes will be introduced for goods travelling between Britain and the EU under traditional WTO rules. According to estimates by the UK's Office for Budget Responsibility, leaving the EU customs union and single market without a trade deal in place could lead to a 2 percent dip in national income next year.

Fisheries, governance, and the specifics of level-playing field conditions to guarantee fair market play are believed to be the issues the post-Brexit negotiations remain stuck on. In terms of fishing quotas, each side is reportedly only ready to cede a maximum of 20 percent of current stocks to the other. Britain insists access should be decided on individually, on an annual basis, so that the EU will thereby treat it as a sovereign nation, with the country being washed by its own sovereign waters. For France, this has proved to be a burning matter, with French President Emmanuel Macron having adopted a firm stance on the UK's fishing waters and the EU's quotas on fishing stocks there.

The UK and EU are also at odds over the so-called "level playing field" - a compilation of rules that would ensure that businesses in one country do not have an unfair advantage over their competitors in others, and would thus guarantee fair market play.

In terms of governance, another critical topic in talks, Brussels wants the UK to follow EU rules closely in areas such as workers' rights and environmental regulations, with London stressing it has the power to decide for itself.