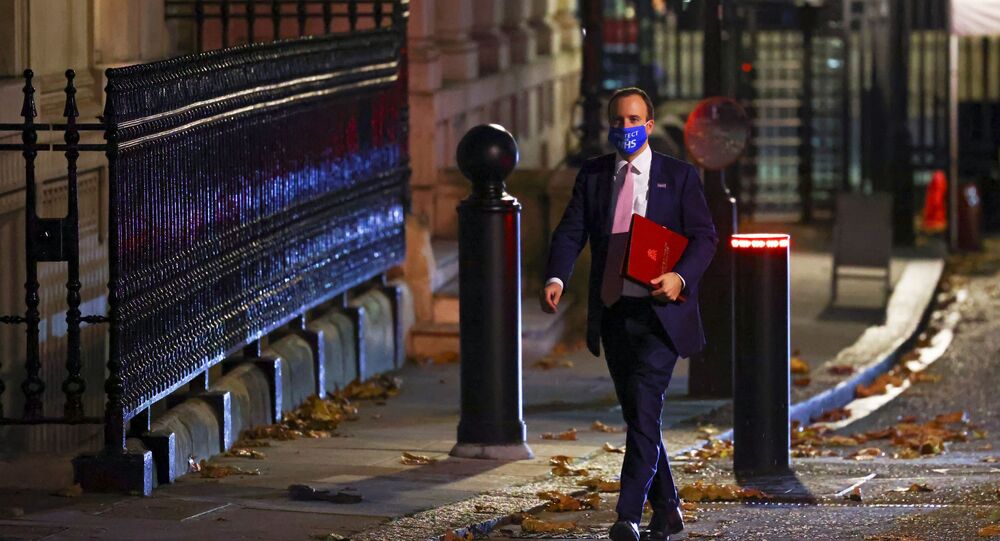 'Is He Taking the Piss?': Matt Hancock Ridiculed for Failed 'Waterworks' Over First UK COVID Jab

As the UK Health Secretary Matt Hancock watched footage of one of the first people to receive the Pfizer coronavirus vaccine on Tuesday, he displayed a very 'emotional' reaction to news, rubbing and closing his eyes in front of the cameras, but not everyone appreciated the tear-jerking moment.

UK Health Secretary Matt Hancock’s seemingly emotional reaction to the news of people finally receiving the Pfizer COVID-19 inoculation outside of clinical trials has triggered doubts regarding his sincerity.

Hancock, who had dubbed Tuesday V-day, was accused of "pretending to cry" during an interview on ITV's Good Morning Britain programme on Tuesday.

Matt Hancock forgot the golden rule of pretending to cry on national television, which is to produce at least one discernible tear pic.twitter.com/NQZSNj9M2H

​His appearance had followed the news that 90-year-old British grandmother Margaret Keenan had become the first person to receive the jab, followed by 81-year-old William Shakespeare. The latter also appeared on the ITV show, prior to Hancock's appearance.

Meet Maggie: the first person in the world to receive a fully-tested and approved Covid-19 vaccine on the NHS. pic.twitter.com/eb2ijTMSLW

​Reacting to Shakespeare's comments, a seemingly profoundly moved Hancock was seen to be swiping at his eyes and briefly shutting them.

However, viewers were not all convinced, due to the lack of any visible tears, and didn’t hesitate to voice their doubts in their posts.

This is just painful, he’s laughing and pretending to cry… Because if he was really crying he would look straight at the camera & let us see his tears

Is he not trying to hide himself laughing?

WTAF. This is pure cringe.

He's no Ian Beale when it comes to turning on the waterworks - that's for sure. pic.twitter.com/TqhQtqXtxR

My God. I thought his effort in the Commons the other day was a one-off but he obviously thought he'd have another go and inject more "emotion". Hopefully this makes a few more people realise we're being scammed.

we have ignored the signs for too long, the man is not human pic.twitter.com/LpSF6GrHNO

​On Tuesday the UK became the first western nation to roll-out a coronavirus vaccine after the jab, developed by German company BioNTech in partnership with Pfizer, was approved by regulators last week.

Margaret Keenan, who turns 91 next week, was the first person in the world to receive the jab outside of clinical trials.

The grandmother, who was given the injection as the first of 800,000 doses of the Pfizer/BioNTech vaccine that will be dispensed in the coming weeks, said it was the "best early birthday present".