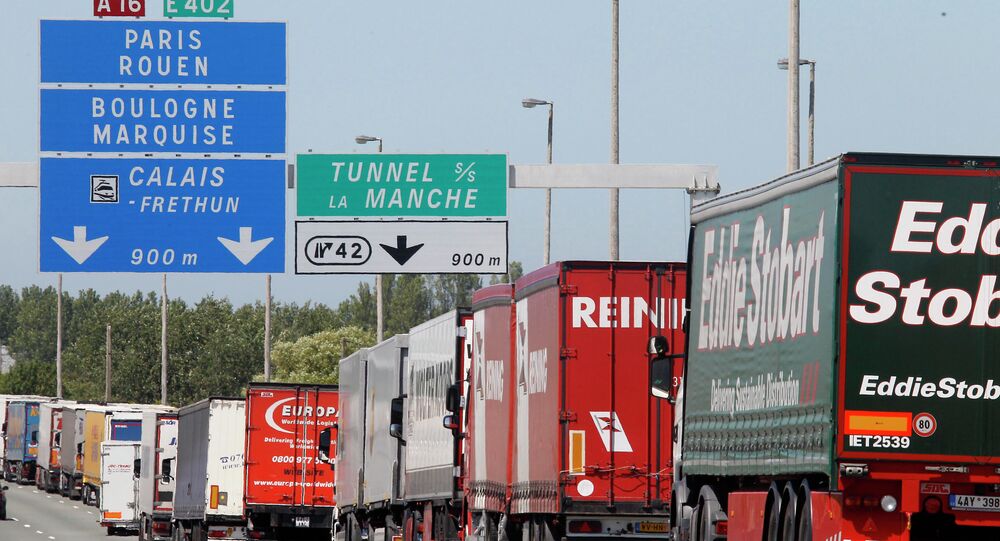 Queues of trucks stretching for five miles unexpectedly developed in Kent at the approach to the Eurotunnel entrance on 24 November after the French authorities tested post-Brexit checks, with many warning this was a glimpse of things to come in January whether a deal is reached or not.

A new post-Brexit customs facility, set to open in Cheshire, near Warrington, has been triggering concerns among local UK councils, as some freight from Ireland will be forced to use the "inland border" in Warrington when the EU exit transition period ends on 31 December.

Fears of impending “gridlock” due to long queues of lorries forming on the M6 have been cited, according to The Guardian.

The government has been urged to invest £2.5m towards improving the roads to avoid the congestion in a site which is forecast to cater to the needs of around 700 lorries daily.

In response to calls from Warrington Borough Council chief executive Steven Broomhead, the government has vowed to consider traffic mitigation in the area.

With extra customs infrastructure called for as of 1 January and ports at Liverpool, Heysham and Holyhead lacking the facilities to expand, the border post is being located inland, with the lorry park in Appleton Thorn to take the place of what used to be a coach interchange for the holiday company Shearings.

The ‘imposed move’ has been slammed by locals, authorities and residents alike.

“This application wasn’t determined by the local authority. It’s been imposed on us and the best they could really do is give us some financial support to get some traffic measures in,” said the chief executive of Warrington borough council.

Will there be a post-Brexit lorry park in east or west Cheshire? Doesn't look like it, for now at least (although we know they are planning one for the old Shearings depot in Appleton Thorn nr Warrington): pic.twitter.com/Ez7l98rWtb

​An appeal has been launched by local residents to monitor the impact of the site.

“We are vehemently opposed to the development and have very serious concerns about the facility and its potential impact on Lymm and south Warrington. The parish council will be liaising with the relevant organisations to minimise its impact on Lymm’s residents and visitors," said chairman of Lymm parish council, Geoff Hawley.

Scrambling to cope with lorry congestion around key ports such as Dover, while providing facilities for HM Revenue and Customs (HMRC) checks on customs declarations for goods coming into the country, the new site is one of 10 “inland border facilities” the government is opening.

The other facilities include two sites at Ashford in Kent, Birmingham airport, Ebbsfleet just south of the Dartford bridge on the Thames estuary, Manston airport in Kent and North Weald in Cambridgeshire.

The Inland Border Facility at North Weald Airfield, located close to junction seven of the M11 north of the M25, will cater to lorries arriving from Felixstowe and Harwich in the east and airfreight from Stansted airport several miles north.

With space for 53 HGV lorries, it will be operational around the clock, with most vehicle checks expected to take a maximum of two hours.

Acknowledging a possible “worst-case scenario”, the government has admitted that there could be lines of as many as 7,000 lorries queuing to board ferries and Eurotunnel trains in Kent.

When French authorities - Police Aux Frontières, the equivalent to Border Force - tested their Brexit immigration software on 24 November the result led to queues up to five miles long forming in Kent, as lorries on their way to the Eurotunnel entrance were stuck in congestion at junction 11 on the M20. Authorities have been attempting to allay concerns.

“We will have the necessary infrastructure in place by the end of the transition period, with construction in progress. We have consulted with local residents at every stage of the planning process, publishing detailed plans for the proposed sites online, and writing to residents to invite them to submit comments on the proposals… we will continue to engage with all local stakeholders as these plans progress,” a government spokesperson was quoted as saying.

150miles driving through freezing fog.... now at the #eurotunnel #freight and it is rammed.. I think all of the EU is trying to get there goods over before #brexit 😭 pic.twitter.com/STwdUvBY5k

​The post-Brexit gridlock concerns are voiced as chief UK and EU negotiators put post-Brexit relationship talks on hold, amid a stalemate over several sticking points, with PM Boris Johnson and EU Commission President Ursula von der Leyen forced to step in and "discuss the state of play". The lack of progress is particularly concerning as the 31 December deadline for the transitional arrangement looms closer.

Concerns have been voiced that as the UK and the EU are at loggerheads over the particularly contentious issues, with access to UK fishing waters and the concept of a 'level playing field' threatening to undermine the possibility of an orderly exit of the United Kingdom from the bloc, the result might be a no-deal scenario.

In the event of such an outcome, the EU and the UK will have to trade according to the rules of the World Trade Organisation (WTO), entailing the imposition of tariffs on a wide range of goods.