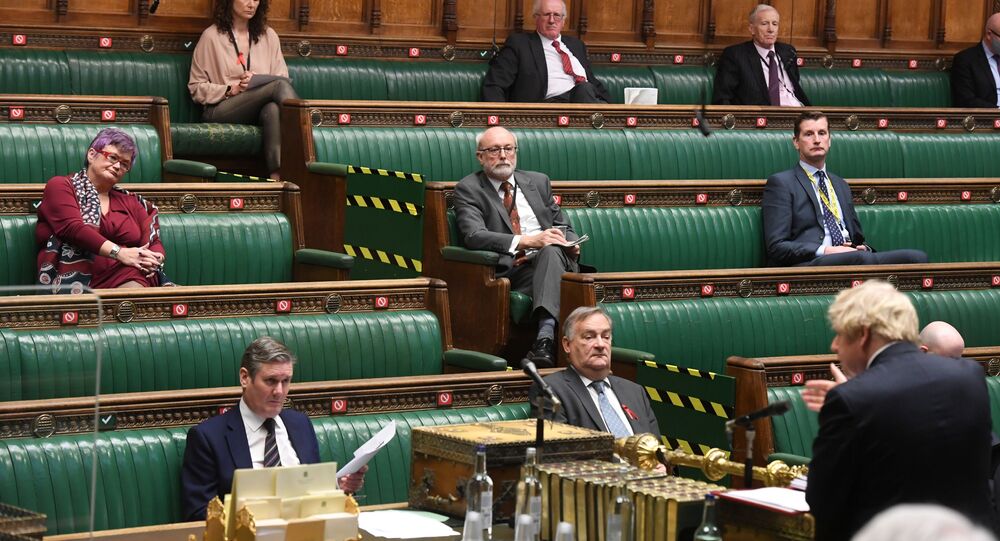 Sir Keir Starmer tried to press Boris Johnson to work together with his Labour Party to stop high street job losses, but the PM said he could not take the opposition seriously after it abstained from a vote on new measures that would let shops reopen across the country.

UK Prime Minister Boris Johnson has laid into Labour leader Sir Keir Starmer after he whipped his MPs into yet another abstention on COVID-19 rules.

Johnson quipped during Prime Minister's Questions in Parliament on Wednesday that Starmer had been promoted from "Captain Hindsight" to "General Indecision".

That was after Starmer said the early approval of Pfizer's coronavirus vaccine by pharmaceuticals regulator the MHRA - and its roll-out as early as next Tuesday - had come too late for those who had already lost their jobs as a result of the two lockdowns. He highlighted the collapse of the Arcadia Group, owner of high street shopping chains Burton, Dorothy Perkins and Topshop, and department store Debenhams - threatening 25,000 jobs.

"I think it is a bit much that the right honourable gentleman should attack the economic consequence of the fight against coronavirus when last night neither he or his troops could be bothered to vote for measures, sensible balanced measures, that would open up the economy and allow businesses to trade," Johnson said.

Starmer ordered Labour MPs to abstain in Tuesday night's vote on whether to approve the revised three-tiered alert level system that replaced the one-month lockdown in England that expired at midnight. The new measures will allow all shops to open under all three levels of restrictions, and for pubs, cafés and restaurants to stay open until 11pm in tiers one and two.

The measures were approved by 290 votes to 78 - with far more Tory MPs rebelling to vote against the restrictions than their Labour colleagues. All eight DUP MPs voted against, compared to 15 Labour MPs plus suspended former Labour leader Jeremy Corbyn.

"When I abstain, I come to the house and explain," retorted Starmer. "Over 200,000 retail jobs have been lost this year," he added. "20,000 stores have been closed on our high street, and that's before the latest restrictions." He urged Johnson to "take this seriously" and "don't deflect" and work with Labour and the trade unions on a plan to help the sector.

Johnson hit back that the government was already spending £200 billion on aid for businesses and workers. "I'd take him more seriously, frankly, if he actually could be bothered to vote for a programme to keep the virus down and open up the economy."

Johnson then listed some of Labour's abstentions on key votes since Starmer took over from Corbyn as leader in April - including one on the contentious Overseas Operations Bill last month, which would set a five-year time limit on prosecutions of any British armed forces personnel accused of war crimes.

© REUTERS / POOL
PM Johnson's COVID-19 Tiers: Inequalities & Perception of Injustice May Trigger Rebellion, Prof Says
In October Starmer whipped MPs to abstain on the third reading of the Covert Human Intelligence Sources (CHIS) Bill, which would protect undercover police officers from prosecution from some crimes committed to maintain their cover. Critics have claimed it would allow 'spy cops' in political groups to act as agent provocateurs. That order to abstain prompted the resignations of several junior shadow cabinet members who rebelled to vote against the bill.

More shadow ministers are said to be threatening to resign if Starmer tells them to vote in favour of any post-Brexit trade deal with the EU - possibly setting up another mass abstention by Labour MPs.