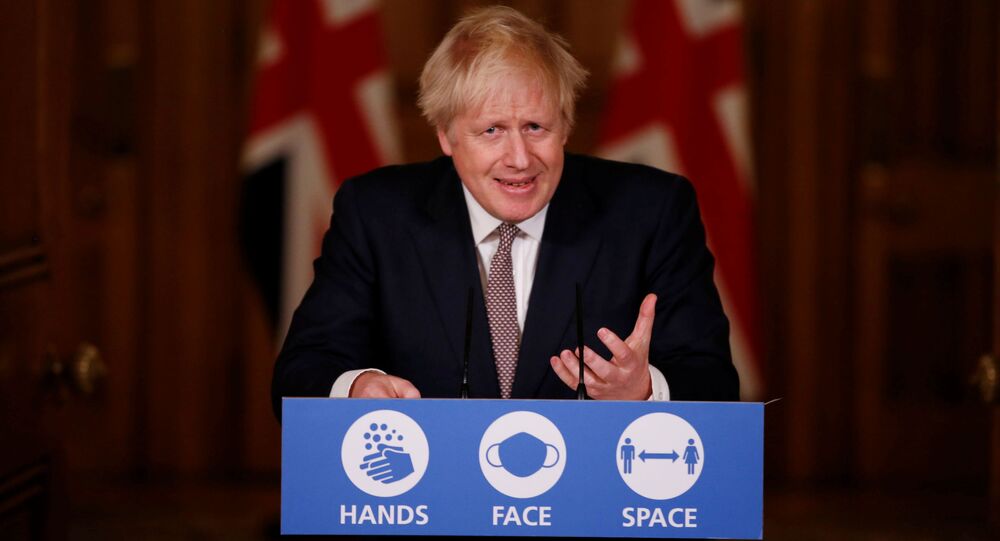 The newly introduced tier system has been met with resentment from some Tory MPs and cautious scepticism from the Labour Party. British academic Darren Lilleker has explained why Prime Minister Boris Johnson's plan triggers concerns and fears among members of parliament and ordinary Britons.

The UK's local restriction tier system may come into force from 2 December, with Prime Minister Boris Johnson calling upon Conservative members of parliament to back his COVID restriction for England amid a brewing rebellion.

The nationwide lockdown that started on 5 November and is set to expire on 2 December has not relieved the pressure exerted on the NHS by the pandemic, according to the British PM. Meanwhile, Labour leader Sir Keir Starmer has signalled he is not quite sure that the new system proposed by Johnson will work, though recognising that "restrictions" need to remain in place.

"The measures in themselves are not harsh, and the purpose of saving lives is a noble one", says Darren Lilleker, professor and researcher in political communication at Bournemouth University, England. "The problem in the UK is twofold. Firstly, that living under restrictions such as these is proving difficult for many ordinary people… Secondly, the restrictions do not make complete sense and have been heavily criticised".

The academic has drawn attention to certain discrepancies in the new system. For instance, people who see virtually no one cannot meet their family, even when they too are having minimal contact with others. At the same time, those who expected to see others, albeit with some protective measures in place, in workplaces such as shops cannot visit elderly relatives using the same measures.

"Meanwhile areas of hospitality have invested heavily in making their outlets safe and compliant with regulations but feel unfairly singled out although only 1.4% of cases are related to hospitality", Lilleker highlights. "That this figure comes alongside the use of track and trace within the hospitality sector suggests the problem is elsewhere".

The newly proposed tier system envisages a "regionally-differentiated approach", where different tiers of restrictions apply in different parts of the UK. There are three tiers for local restrictions: medium alert; high alert; and very high alert. On 26 November, the British government rolled out the full list of local restriction tiers by area. According to the government's official website, one will be able to use a "postcode checker" to find out the restrictions in one's region or a region one plans to visit, adding that the NHS COVID-19 app would be updated on 2 December, accordingly.

What's Behind Rebellion of Tory MPs?

It is by no means surprising that some backbench Conservative politicians have opposed the measures, according to the researcher, who explains that there are two major reasons for the rebellion:

·         The first is that the government interventions are "anathema" to the principles of the Conservatives as well as "damaging to the economy of the country".

"They also use data on the number of deaths, showing they are comparatively lower for November 2020 than was the case in November 2019 to demonstrate that the restrictive policies and economic damage are unnecessary", the professor specifies.

·         The second is due to pressures from within the MPs' constituencies and fears regarding their re-election.

To illustrate his point Lilleker remarks that the harsher restrictions in the North of England, where Tories may have "a tenuous hold over seats won for the first time in 2019", means there is a "growing sense of injustice in these areas".

At the same time, while the Labour Party's calls for greater economic support for the public are gaining steam Tories feel that in this situation they look like "ineffective representatives", the professor adds.

Observers warn that fallout from the COVID-19 pandemic is continuing to cripple the country's economy. Citing the Office for Budget Responsibility (OBR), Bloomberg notes that the pandemic has put the UK "on course for its deepest economic slump since the Great Frost of 1709".

"The economic impact has been huge and continues to grow, especially given that much income that the high street normally gains has already been diverted online to Amazon and similar outlets which in turn impacts the income to the government from taxation", says Darren Lilleker. "Small outlets, be they local produce shops or hospitality are disproportionally effected and tend to be forced to close during lockdowns benefitting the large chains".

Whether the country needs or will need a further lockdown is subject to debate, according to the professor. He argues that there is no substantial increase in hospitalisations or death rates compared to other years.

One of the major challenges, according to him, is that schools and universities have become "key centres for the spread of the virus". Still, while being responsible for the increase in the numbers of cases these facilities do not affect "those most vulnerable" as was the case at the beginning of 2020.

Given all of the above the researcher insists that a "more targeted, individual approach may be better and cause less widespread stress" to the British public and the country's economy.

"Perhaps a better approach is more supported shielding of those with underlying conditions that make them susceptible to the worst effects of the virus", he presumes. "In fact the county approach suggests that there is minimal nuance in the approach to restricting spread. The inequalities and perceptions of injustice are a serious barrier to compliance or even acceptance of restrictions both within and outside of parliament".