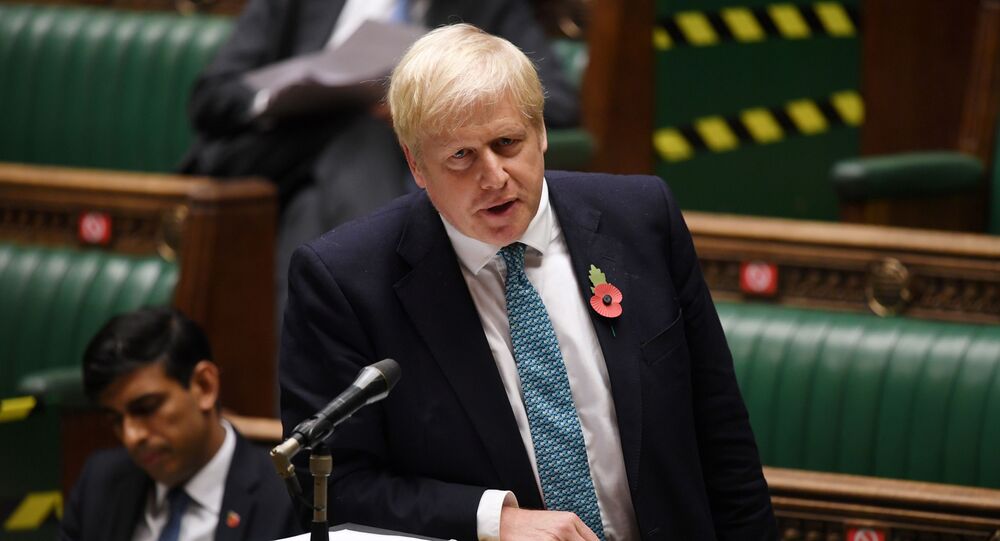 The newly proposed tiering system will see Great Britain be divided into as many as three types of zones depending on the tally of coronavirus cases and respective mortality levels each region clocks.

The UK government has produced a secret forecast outlining the overall impact of the coronavirus infection on the economy, rating a string of sectors as "red", which implies severe job losses and dips in revenues, The Times reported citing the 48-page document. The latter offers "granular" detail on the impact of the raging pandemic sector by sector – "a deep dive" into almost 40 economic areas in total.

Among the "red" sectors are the automotive industry, aerospace, retail, tourism, sports, arts and heritage, and a number of others. The remaining fields analysed are painted amber or green, suggesting the "overall trend" for them is the least depressing.

"There is a lot of detail in there, none of which is in the official impact assessment the government has published today", a minister familiar with the document told The Times, despite a government spokesman referring to it as one containing only open source information and "not altering the fundamental analysis published today".

Details of the yet unpublished dashboard surfaced as around 70 Tory parliamentarians supposedly prepared to rebel today over the government's new tiering system, which is due to come into force on Wednesday. Aspiring to assure them of the crucial nature of the new rules, Boris Johnson is reportedly set to announce that "wet" pubs and bars, which cannot open under Tiers 2 and 3 because they do not serve "substantial" meals, will be granted additional government subsidies to sustain them during this crisis.

The opposition is meanwhile reportedly gearing up to likewise rebel against the new system, which will put 99 percent of the country in Tiers 2 and 3 in the run-up to the Christmas season, in an attempt to root out the pandemic across the country. In particular, reports emerged suggesting that Labour's Sir Keir Starmer will for the first time abstain in the upcoming vote on the new tiered restrictions.

The government's official analysis did not provide any numerical estimates about the potential economic fallout, only making a reference to forecasts by the Office for Budget Responsibility, which said last week that the economy could contract by 11.3 percent by the end of the year.

© REUTERS / HENRY NICHOLLS
A man stands on a telephone booth during an anti-lockdown demonstration amid the coronavirus disease (COVID-19) outbreak in London, Britain November 28, 2020.

The document, published after several Tories accused Whitehall of ignoring the economic repercussions of progressing anti-COVID measures, appears to be quite sketchy on just how the economy would be affected if the current restrictions were eased. It simply states that it "is not possible to know with any degree of confidence" what the effect would be. While fewer restrictions could allow businesses to operate as normal, increased infections could make government spending at large skyrocket "due to voluntary social distancing, effects to confidence, and impacts on businesses, including through high levels of employee sickness".

As for the health aspects pertaining to the newly introduced tier system, the document outlines evidence from software giant Sage suggesting that the previous system was insufficient in controlling the rising coronavirus tally except in areas where the restrictions were the harshest.

The document caused controversial reactions across the political spectrum, with MPs viewing it as quite a vague assessment containing no supporting details.

"This rehashed document offers very little further than that which the OBR published last week. It's frustrating that there is little that sets out how the different tiers might impact on the specific sectors and regions across the country. Those looking for additional economic analysis of the new tiered system will struggle to find it in this document", Mel Stride, a Tory MP and chairman of the Treasury Select Committee, said.

Britain registered a further 12,330 COVID-19 cases on Monday, a decrease of 24.4 percent over seven days, with another 205 deaths recorded across the country. The number of people admitted to hospital with the disease was 1,350, bringing the total over seven days to as many as 13,368, as per UK's health authorities.

As UK's Arcadia Stands On Brink Of Abyss, Why Is Sir Philip Green ‘Unacceptable Face Of Capitalism’?