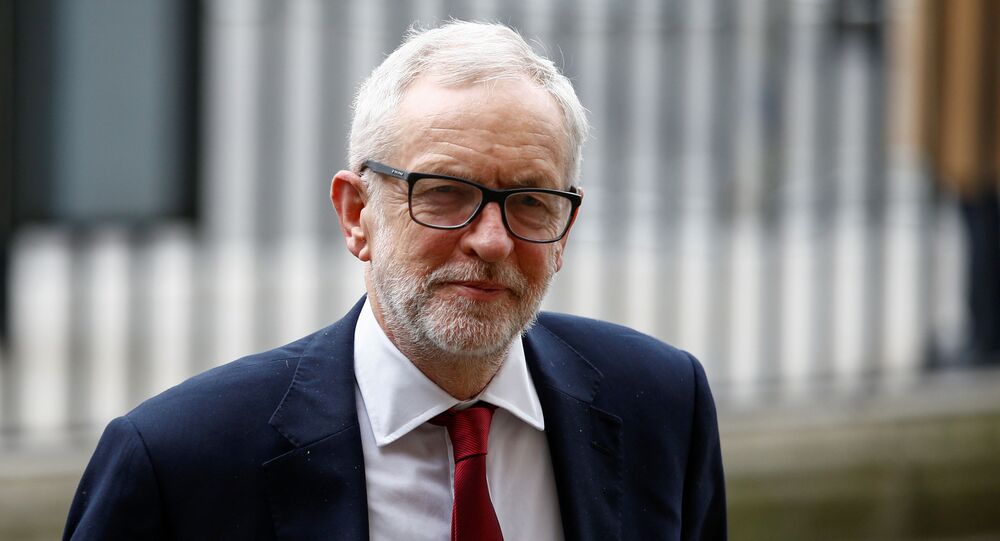 UK ex-Labour Party leader Jeremy Corbyn was suspended from the party as a whole in late October over comments in connection with a report by the Equalities and Human Rights Commission [EHRC] about antisemitism in the party, where he claimed the scale of the problem had been “dramatically overstated for political reasons” by opponents and the media.

Jeremy Corbyn has been informed that his suspension as a sitting Labour MP could last up to three months, according The Guardian.

The party's chief whip, Nick Brown, is said to have written to the former leader of the party on Thursday night to inform him that the whip had been withdrawn pending a probe into whether he violated the Parliamentary Labour Party (PLP) code of conduct.

It was reportedly added that the decision would be kept under review and Corbyn’s conduct during the suspension taken into account.

In late October Jeremy Corbyn was suspended from the Labour Party over comments he made in the wake of a report by the Equalities and Human Rights Commission [EHRC] about manifestations of antisemitism in the party ranks.

At the time, Corbyn slammed his opponents and the UK media for presenting the issue as “dramatically overstated for political reasons”.

A panel of five members of Labour's ruling National Executive Committee decided to readmit Corbyn on 17 November after he had clarified his words that had led to his suspension.

However, following the decision, Keir Starmer had said he would not allow Corbyn back into the Parliamentary Labour Party because he "undermined and set back our work in restoring trust and confidence in the Labour Party's ability to tackle anti-Semitism".

In those circumstances, I have taken the decision not to restore the whip to Jeremy Corbyn. I will keep this situation under review.

​As the party stopped short of restoring the whip, Corbyn is now forced to sit as an independent MP.

The move led Corbyn's solicitors to write to the Labour Party, calling for the suspension to be lifted, according to the BBC.

The developments have also drawn the ire of many of Corbyn's allies in the party, including former shadow cabinet members John McDonnell, Diane Abbott and Richard Burgon.

McDonnell said Starmer’s decision would cause "more division and disunity in the party".

This is just plain wrong & will cause more division & disunity in party. Jeremy’s gone through the formal procedures & decision has been made properly. I appeal to everyone that surely it’s time to move on & start working together to implement the EHRC. https://t.co/d851cLnFr4

So @Keir_Starmer takes unilateral decision to exclude @jeremycorbyn as a Labour MP. But no notice, no consultation, no right of appeal, no redress...no due process at all. And Starmer was a human rights lawyer #IStandWithJeremyCorbyn pic.twitter.com/mRz9FKJYwd

More than a dozen members of the Labour Party's ruling national executive (NEC) attacked Keir Starmer over the decision regarding Corbyn, claiming it “flies in the face of natural justice”.

Amid the suspension row and reportedly growing discontent within the ranks of Labour MPs, a key Corbyn ally warned Starmer that he could face a leadership challenge.

On Friday, Wansbeck MP Ian Lavery told HuffPost UK’s Commons People podcast that the “opportunity” for a leadership challenge would always be available, but added that he hoped the party would “settle down” and “unite”.

“It looks very much that this is a vengeful, divisive, provocative sort of move from Keir Starmer. This isn’t about uniting the party – it looks to me as if it’s a personal and political vendetta now from the new leader of the party to the previous leader of the party…,” said Lavery.

“I’m not being melodramatic but that’s a little bit like a tin pot dictatorship to me.”

Lavery emphasised that there would be “a lot hinging on how Keir reacts not just to this but how Keir performs on behalf of the party”.