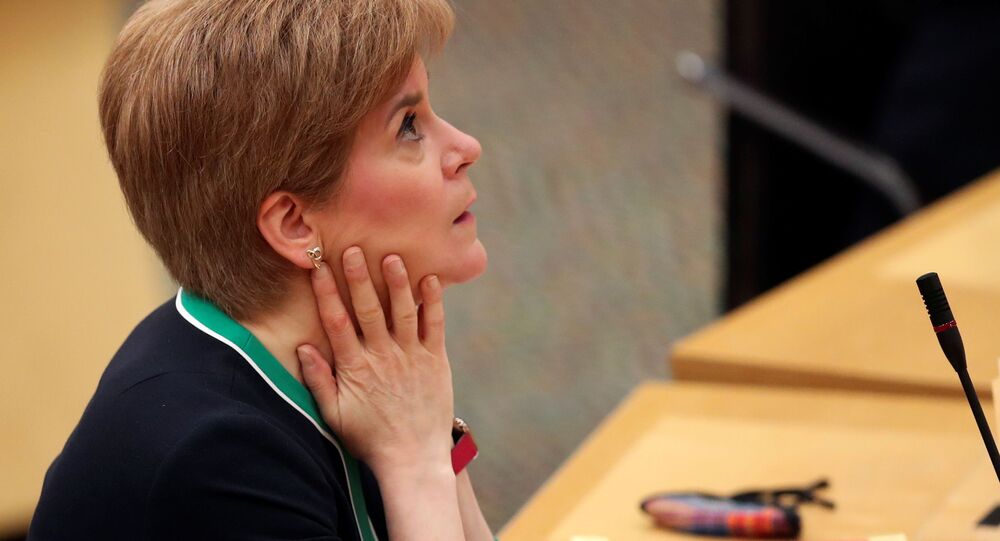 Last year, Scottish First Minister Sturgeon framed a potential second referendum as a "choice between Brexit and a future for Scotland as an independent European nation".

UK Housing Secretary Robert Jenrick has lashed out at Scottish First Minister Nicola Sturgeon over her push for a second independence referendum in Scotland.

"Any politician who wanted to hold a referendum on a topic like this, at this moment in time, is frankly mad", he was cited by The Sun as saying on Tuesday.

Jenrick also described possible Sottish independence as a "dangerous and disappointing outcome that we need to battle against".

He added that the UK is "in the middle of a very serious health situation, a pandemic" and that the country is "also seeing massive disruption to people's lives and livelihoods as a result of the economic disruption that's flowed with it".

The Tory minister was apparently referring to a recent tweet by Sturgeon, in which she commented on Prime Minister Boris Johnson's reported remarks that the Scottish Parliament was a "disaster" for Britain and that it was ex-PM Tony Blair's "biggest mistake".

Worth bookmarking these PM comments for the next time Tories say they’re not a threat to the powers of the Scottish Parliament - or, even more incredibly, that they support devolving more powers. The only way to protect & strengthen @ScotParl is with independence. https://t.co/Hk7DqoFeuY

A Downing Street spokesperson, in turn, said in a statement that Johnson "has always supported devolution but he is at heart a unionist and he is very troubled by the rise of nationalism and separatism".

Blair's Labour government brought in devolution for Scotland in 1999, a move which specifically stipulated the setting up of a parliament in Edinburgh.

As for Jenrick's remarks, they come after Sturgeon made it clear in late 2019 that "all options" are on the table for Scotland to hold a second independence referendum.

"The question is often posed to me: 'what will you do if Boris Johnson says no?' As I've said before, I will consider all reasonable options to secure Scotland's right to self-determination", she said.

She stressed that a new referendum on leaving the UK should be held legally, announcing that she would ask Prime Minister Johnson for a transfer of powers from Parliament in a bid to hold a new vote.

© REUTERS / Henry Nicholls
This is Not the Time to Have Another Scottish Independence Referendum, Boris Johnson Says
During the 2016 referendum on membership in the European Union, Scotland largely voted against Brexit. Scottish voters were first asked whether they wanted independence for Scotland in September 2014, with 55% voting against it.

The government in Holyrood has since then proposed a second referendum, which however hasn't been approved yet as Prime Minister Johnson has repeatedly opposed the idea.