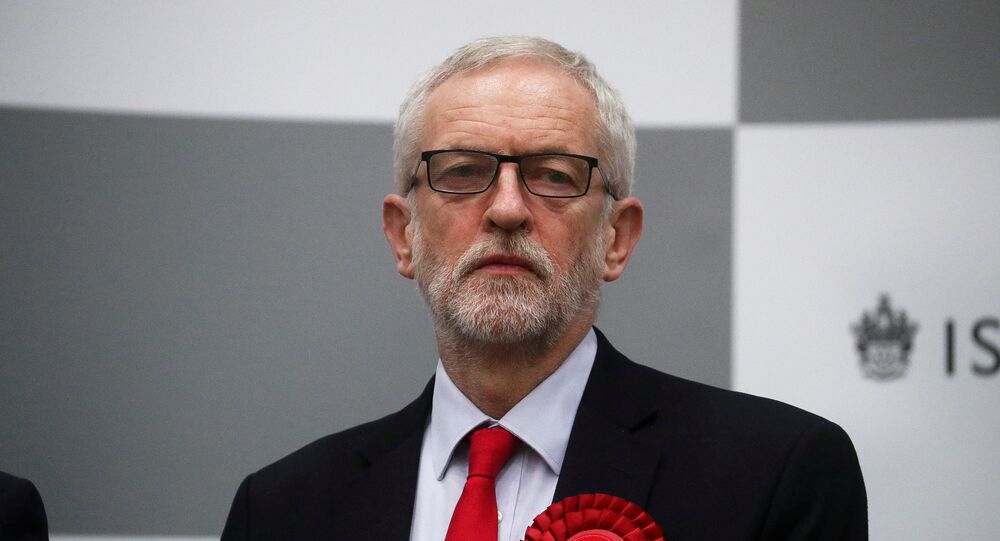 Labour's National Executive Committee was meeting on Tuesday to consider whether to lift ex-leader Jeremy Corbyn's suspension or press disciplinary charges, amid rumours that union leader Len McCluskey had brokered a deal for his reinstatement.

Suspended Labour Party leader Jeremy Corbyn has stepped back from the comments on anti-Semitism in the party that led to his controversial suspension last month.

Ahead of the first meeting of Labour's newly-elected National Executive Committee (NEC) on Tuesday, Corbyn posted a statement on Facebook stressing that he had not meant to downplay the seriousness of anti-Semitism allegations within the party in a bid to to have his Labour membership and the Parliamentary party whip restored.

“To be clear, concerns about antisemitism are neither ‘exaggerated’ nor ‘overstated’,” he wrote. "The point I wished to make was that the vast majority of Labour Party members were and remain committed anti-racists deeply opposed to antisemitism."

​The former leader thanked thousands of Labour and trade union members and others across Britain and the world for their solidarity in opposing his suspension, and expressed hope that the issue would be resolved quickly "so that the party can work together to root out antisemitism and unite to oppose and defeat this deeply damaging Conservative government.”

Current Labour leader Sir Keir Starmer suspended Corbyn, a Labour member for 54 years and an MP for 37, and withdrew the whip over his comments on the Equalities and Human Rights Commission report into the party, published on October 29.

While Corbyn said then that "one anti-Semite is one too many" in the party, he insisted that "the scale of the problem was also dramatically overstated for political reasons by our opponents inside and outside the party, as well as by much of the media."

A Labour source told Sputnik that an NEC sub-committee was meeting on Tuesday morning to discuss Corbyn's suspension before the full executive meeting that afternoon. But the Labour Disputes Committee, which gathers between full NEC meetings, would have to approve any vote to re-admit Corbyn.

Political gossip site Guido Fawkes claimed a source said super-union Unite General Secretary Len McCluskey had brokered a deal to see Corbyn reinstated - although "moderate" NEC members were resistant to it. McCluskey, a leading figure on the left of the labour movement, warned of "chaos" in the party over Corbyn's suspension.

© AFP 2020 / Dan Kitwood
Corbyn's Suspension: Labour May Lose $7 Mln a Year in Funding From Unions, UK Media Says
The party had previously said that Starmer, who as party leader sits on the NEC, would not get involved in Corbyn's case.

Guido Fawkes quoted a Labour insider, who said: “Looks like Keir has bottled it. He’ll be in worse position now for letting him back in than if he hadn’t suspended him in first place. Makes him look weak and controlled by Unite.”

None of the shifting factions in the Labour Party won a clear victory in the NEC elections, the results of which were announced last week. Corbyn ally Laura Pidcock, who lost her North West Durham seat to the Conservatives last year, made it onto the committee. But another winner was self-declared moderate Luke Akehurst, of the Labour First slate that pledged to keep the party "safe from the organised hard left".

Akehurst is also director of the We Believe in Israel group, which opposes the Boycott, Divestment and Sanctions BDS movement against Israel. As leader, Corbyn called for a ban on UK arms sales to Israel over its response to the Palestinian Great March of Return last year.

And Labour General Secretary David Evans wrote to party branches in the wake of the EHRC report, forbidding them to question its findings or oppose Corbyn's suspension. Last week, several members of the Bristol West branch were suspended for calling his suspension “a politically motivated attack against the left of the Labour Party by the leadership”.