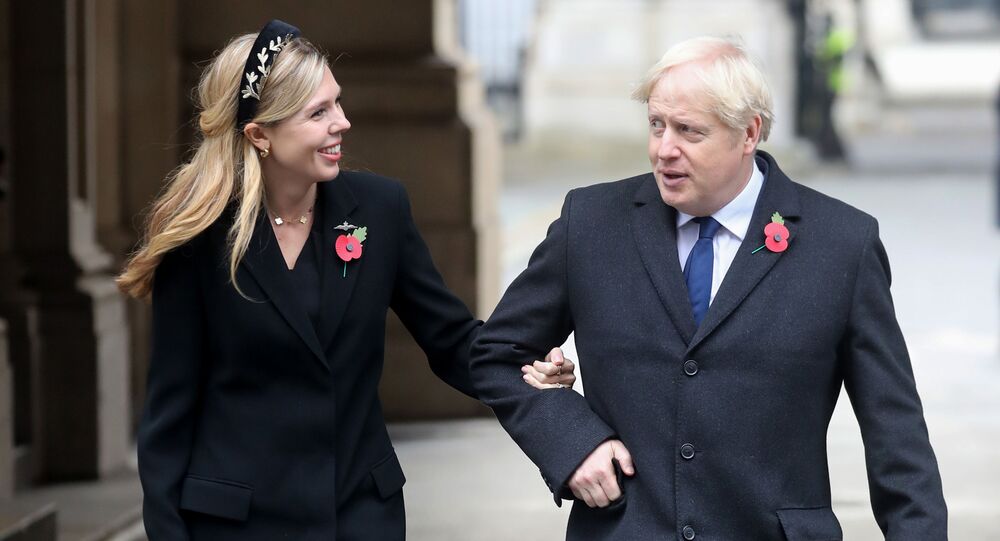 On Saturday, a spokesperson for Boris Johnson said that the UK PM had not been distracted by the turmoil over the resignations of his chief adviser Dominic Cummings and director of communications Lee Cain, adding that Johnson was "fully focused" on tackling the COVID-19 pandemic.

The Daily Mail has quoted unnamed sources close to the ousted Vote Leave duo, Dominic Cummings and Lee Cain, as predicting that "it's the beginning of the end" for Prime Minister Boris Johnson amid the row over their resignations and alleged role of Johnson's partner Carrie Symonds in the affair.

"You can smell it. It's the end of days. It's a story as old as time. The Mad Queen destroys the court", one source said, reportedly questioning Johnson's ability to say in the government.

Another insider claimed to have a "feeling that Rishi's time is drawing close", and that "Boris has left the room", in an apparent nod to Chancellor Rishi Sunak's alleged leadership ambitions.

A source close to Symonds, in turn, was cited by the Daily Mail as slamming the criticism of her purported influence over Johnson, calling it "rank misogyny". Symonds earlier objected to Cain's appointment as director of communications, citing a raft of reasons, including an alleged "macho culture" that he ostensibly tried to introduce.

"The idea that she is a woman and therefore shouldn't have a voice is unfair. The vitriol and bitterness towards her have been quite something […]. No. 10 has been devoid of senior women and the more rounded opinions which they offer", the sources argued.

Additionally, the newspaper cited an unnamed Cabinet minister a saying that Johnson "shouldn't be involved in all of this".

"It should be going on out of his sight. And the fact he's been dragged into this and has been involved in discussions with everybody including his girlfriend, is probably not the best use of his time or talents. We all know Boris hates this kind of cr*p", the minister added.

The remarks followed former Brexit Secretary David Davis describing relations between Johnson and Cummings as something that "fell off a cliff". Davis suggested that the British PM "will want to reset" the government and that "he's going to need a new chief of staff who has got to be fiercely efficient but not fiercely political".

"He's got to find someone who doesn't have their own agenda", the ex-Brexit secretary asserted.

The straw that reportedly broke the camel's back was BoJo's discovery that Cummings and his pro-Brexit loyalists had been referring to Carrie Symonds, the PM's partner, as "Princess Nut Nuts".

Cummings and his allies were said to be growing frustrated with Symonds, who has allegedly been giving advice to the PM on Brexit strategy at odds with the staunchly-pro leave bloc, led by Cummings. Broader power struggles were also said to be taking place between those within the government who want a friendlier Brexit more amenable to better relations with the EU, and those who want a clean break, led by Cummings.

A Johnson spokesperson, meanwhile, said on Saturday that the UK prime minister had not been distracted by the row and is "fully focused" on grappling with the coronavirus-related issues.

© REUTERS / JOHN SIBLEY
Johnson's Aide's Resignation: Tory Government Was in Turmoil Since Start of Pandemic, Observer Says
Rumours of tensions within Johnson's inner circle emerged earlier this month, with Cain saying in a statement last week that he would resign from his position.

Cummings, in turn, was urged by scores of opposition lawmakers to resign after a report by The Guardian in May, describing how Johnson's chief adviser travelled from London to County Durham with his family in late March after his wife had started displaying coronavirus symptoms.

Critics insisted that his trip violated the government's COVID-19 restrictions but the official said that he left London to take his child to his parents' home, adding that he was not considering resigning.