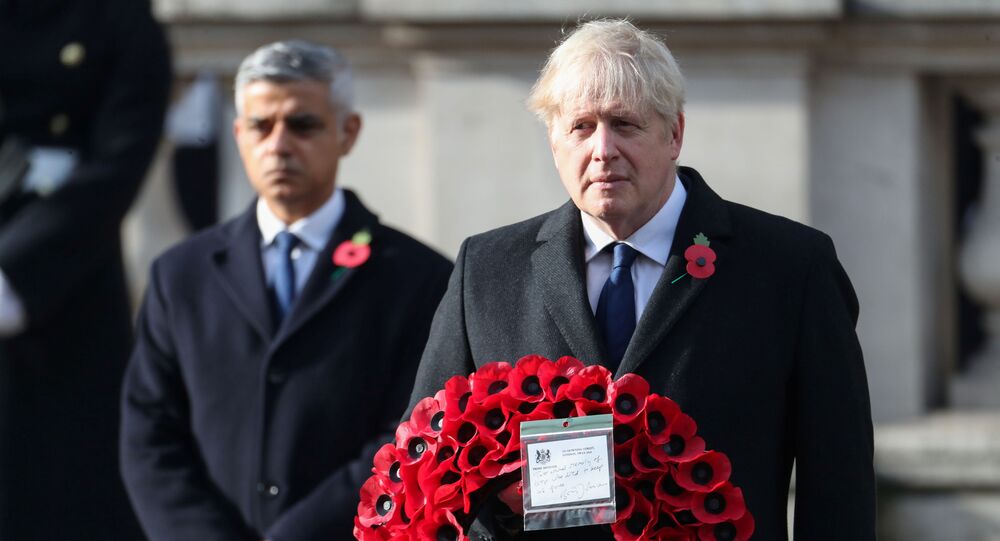 Ruling Conservative Party backbench MPs warned the government that any attempt to extend the current four-week lockdown in response to a spike in COVID-19 infections would face increasing resistance with new cases already falling.

British Conservative MPs are demanding Prime Minister Boris Johnson end the second COVID-19 lockdown they say he was 'bounced' into based on now-debunked data.

Ministers and backbenchers pointed out the headline figure of 4,000 deaths a day from the virus at the centre of Johnson's horror Halloween press conference had failed to materialise. Some speculated that a hundred Conservative MPs could rebel and vote against any attempt to extend the lockdown.

In fact the number of coronavirus fatalities reported on Sunday was 156, down from 162 the previous Sunday. And the daily number of new infections had also fallen from 23,254 to 20,572, prompting hopes for an early end end to the four-week national lockdown that began last Thursday.

Johnson felt he was "bounced" into declaring the draconian measures, according to one anonymous Cabinet minister who spoke to the Daily Mail.

"I think he is concerned that he may have been bounced into it," the minister said. "He was really, really cross about the leak because at that point a different decision might still have been made."

The ministerial source said there was no concern that the data used to justify the lockdown were now being proven inaccurate.

"In fact the figures seem to be suggesting things were getting better before the lockdown began – we are being shut down for a month when we did not need to be."

The un-named minister predicted the fiasco would dissuade Johnson from extending the current lockdown or ordering another in future, saying: "All of this goes against his political inclinations."

But Downing Street denied those claims, insisting other facts justified the lockdown.

"It is true that we were furious about the leak, but the PM is absolutely clear that the evidence showed these measures were necessary," a spokesperson said. "Even if you put the 4,000 figure to one side, there was plenty of other very concerning data, such as the hospitalisation figures, that made it very clear he had to act."

Leading Tory backbencher Sir Graham Brady warned at the weekend that many more of his colleagues could vote against the government if it tired to extend the second lockdown after December 2.

The new nation-wide measures replaced the short-lived three-tier system where the level of restrictions varied from one area to another depending on the infection rates there. That system had provoked protests from the Greater Manchester Mayor Andy Burnham and other local leaders who felt their cities were being unfairly singled out.

But the blanket 17-day 'firebreak' lockdown imposed by Wales' devolved government also enraged residents after supermarkets were ordered to stop selling 'non-essential' items like children's clothes and Christmas gifts, and police were sent to the nominal 'border' with neighbouring English counties in a bid to stop drivers making journeys deemed unnecessary.

But fellow backbencher and former minister Sir Desmond Swayne MP was optimistic Johnson would end the lockdown early, given the government's recent U-turns on free school meals and ending the furlough scheme for employees laid off during the lockdown.

"We've not shown any reluctance to just reverse decisions that we thought were wrong in the recent past," Swayne told the Mail Online. "If we think that the wrong decision has been made then clearly it should be reversed as soon as possible."

© REUTERS / Henry Nicholls
Guy Fawkes vs Quarantine: Million Mask March Held in London as People Protest Against Lockdown
11
"The less damage done the better. No point in hanging on for the full month just to maximise the pain," he added. "Particularly when all the signs are starting to show that actually according to the data we have already turned the corner."

And another senior Tory MP said demands for an early exit would be amplified if the number of infections kept falling.

"If the decline continues the government should be looking at relaxing the restrictions earlier than December 2,' the un-named MP said. "The economy cannot remain frozen like this."