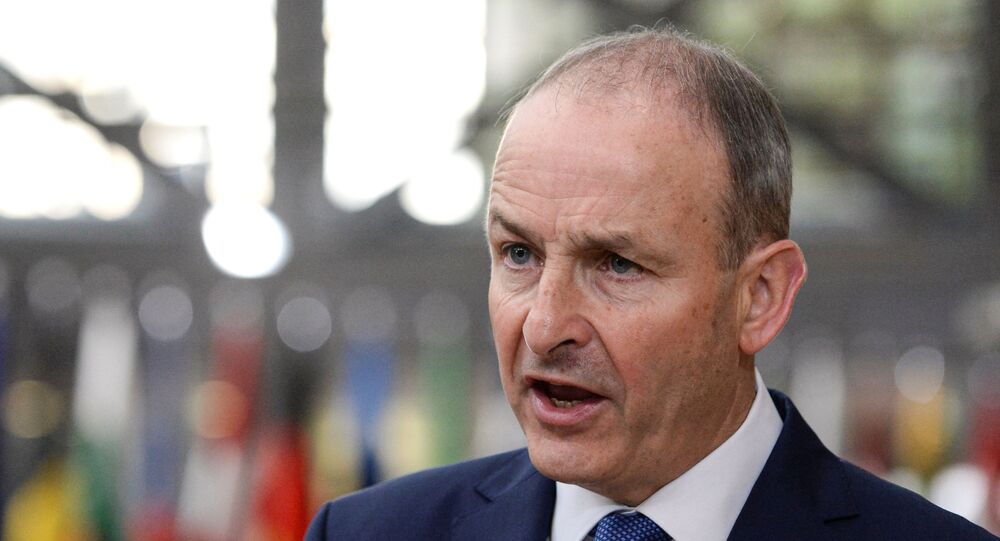 US Northern Ireland envoy Mick Mulvaney said Ireland's Foreign Minister told him Brussels would use the threats of a block on airline flights to force Westminster and Dublin to impose a 'hard border' in case of a no-deal Brexit.

Ireland's prime minister has dodged the question of whether Brussels would block airline flights from the UK if Downing Street doesn't give in to its demands.

Taoiseach Micheal Martin was forced to answer to revelations by US President Donald Trump's Northern Ireland envoy Mick Mulvaney, that Irish Foreign Affairs Minister Simon Coveney had told him the EU could "make life very difficult" for flag carrier British Airways if it does not get its way.

"I haven't heard that being discussed at EU council meetings, not even on the fringes of those meetings," Martin told Sky News on Saturday, referring to the council of member states' heads of government. "I have attended some key EU Brexit meetings now and my discussions with Michel Barnier, Europe is very focused on the intensive negotiations that have been underway for quite a few weeks."

Barnier represents the European Commission, which is locked in last-ditch talks for a trade deal with the UK before the Brexit transition period ends on December 31. The European Council is not directly involved, but member states can veto the deal.

Speaking at a virtual conference of think-tank the Institute of International and European Affairs (IIEA) in Dublin on Thursday, Mulvaney said he had asked Coveney if Brussels would punich the Republic of Ireland with trade restrictions if it refused to impose a 'hard border' with Northern Ireland in case of a no-deal Brexit.

Such a border could be ruled a breach of the Good Friday Agreement that ended decades of sectarian terrorism in the North. But some claim keeping the flow of largely agricultural goods across the land border unregulated could be a 'back door' for avoiding EU import tariffs.

"There's much larger more powerful levers the Europeans could pull under those circumstances than a border across the island of Ireland," Coveney replied.

"The example he gave was commercial aviation. Which gets to the British in some place which is a little bit closer to home perhaps in a larger economic impact," Mulvaney said.

"What I took away from the meeting was that British Airways continues to want to fly from London to the continent, and if the Europeans got really, really upset, they could make BA's life very difficult."

A spokesman for Coveney did not deny the minister made the comments to Mulvaney, but only insisted they were "not a threat".

Coveney and Mulvaney had a “wide-ranging discussion which included EU and UK interdependence beyond and despite Brexit," the spokesman said. "It was in that context that aviation was discussed and not as a threat.”

In 2018 Coveney's Fine Gael party leader threatened to block UK flights over the Republic of Ireland if the UK did not agree to the 'backstop' proposal to keep Northern Ireland within the EU's Customs Union. The UK's Internal market bill, now close to being passed by Parliament, would tear up the backstop deal if there is no trade agreement.

Mulvaney's revelations came amid speculation by political pundits that US Democratic Party candidate Joe Biden would seek to punish the UK over Brexit - if he is handed the keys to the White House in the ongoing election dispute.

Trevor Kavanagh, political editor of The Sun newspaper, wrote this week that Biden was "an avowed supporter of “ever-closer” EU political and monetary union — ­ exactly the reason the EU is tearing itself to shreds."

"We will be once more at the 'back of the queue' for favours," Kavanagh warned, referring to ex-Presidnet barack Obama's 2016 threat. "Forget about a swift and lucrative trade deal with the wealthiest nation on Earth."

In a sign that there was yet to be significant progress in post-Brexit trade talks, British Prime Minister Boris Johnson said once again on Friday there was "a deal to be done" in the next 10 days - but that the UK was ready for a no-deal Brexit and trade with the EU on World Trade Organisation terms as Australia does.

"But obviously that depends on our friends and partners across the Channel," Johnson said. "I think there is a deal to be done, if they want to do it. If not, the country is, of course, very well prepared. As I have said before, we can do very well with on Australian terms, if that is what we have to go for."

© AP Photo / Owen Humphreys
Widespread Trade Disruption Likely on UK-EU Border After Brexit, Audit Office Report Says
The talks have been deadlocked for months over EU demands that its own European Court of Justice rule on any disputes under the deal, that the UK abide by Brussels regulations to ensure a "level playing field" on competition, and that fishing boats from EU nations continue to take three-quarters of the catch from UK waters.