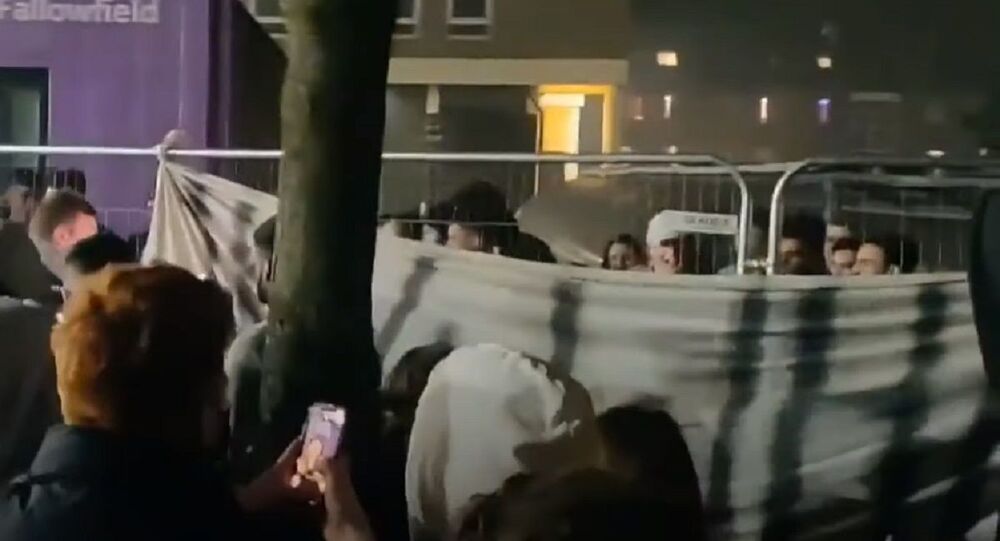 As the new term begins, the United Kingdom has decided to send university students back to campus to attend in-person classes and stay in their residential halls. However, due to the coronavirus outbreak and the new 4-week lockdown, many students have found themselves under heavy security measures.

University of Manchester students revolted against lockdown rules and tore down the fencing installed at their Fallowfield campus on Thursday night.

Hundreds of students organised a protest against the university's erection of metal fencing at accommodation halls including Owens Park and Unsworth Park.

Protestors gather after fences were put up at Manchester University to keep students in.

Students are still paying extortionate fees across the country despite online lectures.

​The university had sent out a statement earlier in the day saying the fencing was installed as a "security measure" as England enters a second lockdown until December.

Both students and parents criticised the move for "penning them in", with the youngster only finding out about the erection of the fencing as they woke up.

Just before 9pm, around an hour after the demonstrations started, the university formally apologised and said the structures would be taken down on Friday morning.

Professor Dame Nancy Rothwell, President and Vice-Chancellor of the university apologised "for the concern and distress caused by the erecting of a fence around our Fallowfield Halls of Residence today".

"This was not our intention – in fact quite the reverse", she said.

Dame Rothwell said that they were "intended as a response to a number of concerns received over recent weeks from staff and students on this site about safety and security; particularly about access by people who are not residents".

"There was never any intent to prevent students from entering or exiting the site".

Despite the promise to remove the fencing, the students had already taken matters into their own hands and tore it down with footage of rioting students later circulating on social media.

Hundreds of Manchester students have torn down fences that were erected outside of their flats, in protest against being treated like prisoners by university management. pic.twitter.com/lCdd5bTY38

FENCES HAVE NOW BEEN PULLED DOWN pic.twitter.com/vfsiznF0mv

​Speaking to Good Morning Britain on Friday, university students told hosts Piers Morgan and Susanna Reid that they had requested further security as people from outside the campus were coming to their events.

“You see a lot of students wishing to go home but they haven’t allowed students to break their rent contracts and come back later so it would mean paying for an empty room", said Izzy Smitheman

The incident follows the government's decision to send students back to university campuses for the new term and attend in-person classes and lectures.

While crammed into their halls of residence and not allowed to leave, coronavirus tore through a number of campuses across the UK. As of the end of November, 23 universities had reported outbreaks, with students in Glasgow and Manchester quarantined in their accommodation.

As well as widespread mental and physical health concerns, many students have reported insufficient or inadequate food in including a vegetarian Muslim reportedly being given a ham sandwich.

In response to the outbreaks, universities have moved many of their classes online, leaving students to fork out £9250 annually for online classes and more than £100 a week for accommodation.

Rent contracts are signed an entire year, meaning students will be paying out thousands of pounds for their accommodation.

On 1 October, the National Union of Students (NUS) and Rent Strike began holding training sessions for students in order to organise a full rent strike in response to the ongoing crisis.

The NUS has called for students and SU officers to "join forces" and direct anger towards the government and take action on 17 November at town hall meetings.

We need to channel this anger towards the government. Students have been let down time & time again - we won't stand for it any longer. Make your voices heard. Join our #StudentsDeserveBetter campaign & take action on 17th Nov at Town Hall Meetings👉https://t.co/zkauyL3gSD
(2) pic.twitter.com/WB16uckm2N