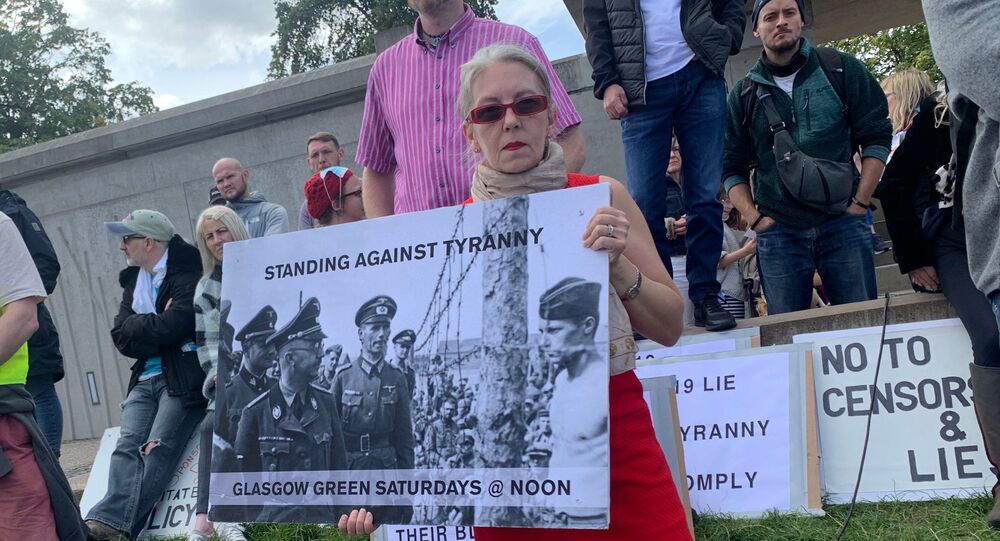 Following the first national lockdown introduced by the British government in March to curb the spread of coronavirus, the United Kingdom saw demonstrations prop up which led o concerns over the rise of transmission at political protests.

Protest exemptions will not be included in second lockdown rules, the Times reported on Tuesday, leading to a backlash from activists and human rights organisations.

The new regulations which will be imposed to curb rising cases of COVD-19 will be introduced on Thursday, 5 November. While the measures will not explicitly ban protests, the protections of large-scale lawful protests will be removed.

Protest groups who were involved with many of the mass gatherings during the initial lockdown earlier this criticised the move.

"With regards to protesting, and protesting through the pandemic, one thing that is clear, we have no support from the government in any way shape or form", said Tyrek Morris, who co-founded All Black Lives UK, a youth-led offshoot of the Black Lives Matter (BLM) movement.

Morris said that protests had already faced state opposition despite being permitted under the previous exemptions.

“Since the BLM movement arose again, the government has been completely against our protest, against protest full stop, and at every chance possible have tried to stop us. But we’ve always found a way around it. They could stop us protesting, but they can’t stop us fighting for our own rights", he said.

Policy and campaign manager for human rights group Liberty, Rosalind Comyn, said that people should be able to "stand up for what we believe in".

"In a healthy democracy protest is one way we do that, and that’s why any measures which stop people expressing dissent are deeply worrying and should be treated with suspicion", she said.

Comyn stressed that they had enforced "proportionate measures" to save lives during demonstrations and that due to the parliament being "sidelined at every turn" during the government’s pandemic response, protest is now "even more important than ever to ensure everyone’s voices are heard".

Home secretary Priti Patel is set to brief chief constables on the weekend and will be expected to enforce the regulations. However, certain senior police officers have raised concerns that the move is too draconian for the UK.

According to the Guardian, Whitehall sources claim the revision was led by the Covid-19 taskforce in order to simplify the rules.

However, a senior police source they are concerned about being “left in the middle” by dropping the protest exemptions and would prefer specific guidelinesas opposed to vague rules which are open to interpretation.

Police are reported increased strain due to Covid regulations coupled with a return of regular crime to traditional levels, after dropping during the first lockdown.

“The right to peaceful protest is one of the cornerstones of our democracy. In these unprecedented circumstances, any gathering risks spreading the disease, leading to more deaths, so it is vital we all play our part in controlling the virus", a Home Office spokesperson said.

“People must follow the rules on meeting with others, which apply to all gatherings and therefore protests too. As they have done throughout the pandemic, the police and local authorities will engage, explain and encourage people to follow the rules before moving on to enforce the law".

The previous coronavirus regulations were previously amended in order to clarify protest rules, allowing individuals to meet in groups if more than six at protests so long as the event was held by a business, charity, or political organisation, had carried out a verified risk assessment, and the organiser has taken sufficient steps to minimise the risk of transmission.

Throughout the summer, numerous protests from across the political spectrum were held which saw mass gatherings of people despite social distancing regulations. In response to the deaths of numerous African American men at the hands of police in the US, BLM protests swept the country, with some highlighting the lack of enforcement of anti-COVID 19 measures.

​Other demonstrations included both opposition to and support for the maintaining of statues accused of glorifying colonisers and slave owners in major cities in the UK.

​Most recently, large demonstrations have propped up in London, Edinburgh, and other economic hubs in opposition to lockdown measures in general.