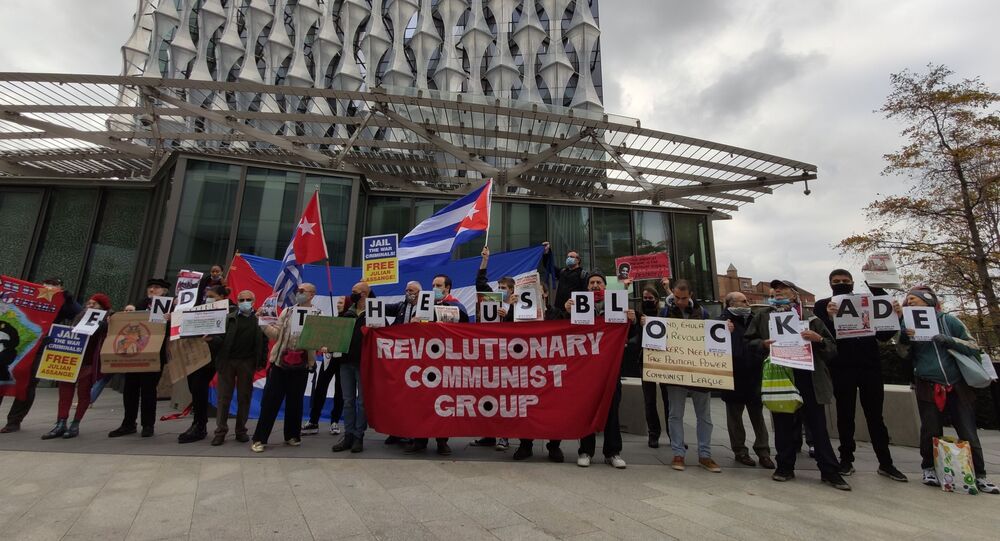 A major solidarity group held protests outside the United States embassy in London on Saturday to condemn the ongoing blockade against Cuba, it was revealed.

The US had been trying to "strangle the Cuban economy" with measures to cause medicine shortages and block purchases and donations of medical equipment to treat COVID-19, the Rock Around The Blockade solidarity campaign said.

The Trump administration's Title III measures, added to the Helms-Burton Act in April last year, have led to the increased shortages, the campaign wing of the Revolutionary Communist Group said.

According to the group, Washington claims that Cuban medical internationalists were "slaves" despite nearly 4,000 specialists from the island nation treating COVID-19 infections in nearly 40 countries.

The 60-year-long measures have been routinely voted against in the United Nations General Assembly (UNGA) in annual resolutions. Only the US, Israel and Brazil voted against the resolution calling for an end to the blockade last year.

The Helms-Burton Act was passed in 1996 by the Clinton administration, but "extraterritorial" blockade restrictions had been imposed since the 1960s under the Kennedy administration, Will Harney of Fight Racism, Fight Imperialism, told Sputnik.

© AP Photo / Ramon Espinosa
Trump Gov't Pushing Lawsuits, Sanctions On Cuba As Havana Celebrates 26 July Movement–FRFI Writer
But the Trump administration passed Title III of the Act, allowing US individuals and companies to sue "anyone who trades with Cuba" or those with property in the country after the Cuban Revolution.

Firms such as ExxonMobil (Esso) have launched lawsuits against Cuban state enterprises, and numerous cruise liners had been targeted by lawsuits in a bid to "increase the risk" of doing business with the country. Such strategies were to "isolate Cuba from its Latin American neighbours", Harney explained.

"They are returning to a very aggressive posture towards Cuba, which is designed to put pressure on the Cuban economy. I think that, in a broad sense, the US has been pursuing protectionist powers, but there really is a deepening capitalist crisis around the world, and this is bringing out US rivalries and confrontations with other global powers such as China," he said.

The European Union had formally opposed the blockade since the 1990s and reached an agreement with Washington to not trigger sanctions under the provisions to target European firms, he explained.

Trump activation of Title III could have consequences for European firms, revealing a developing rivalry between the US and EU, he said.

"Trump no longer considers it sufficient risk to upset the EU and and is willing to isolate itself to pursue its aggressive foreign policy towards Cuba and its allies", he added.

According to Harney, the blockade was an "attack on socialism and the examples that socialism sets for those countries".

The rally comes ahead of an online meeting on 29 October, ahead of the US elections, to discuss the effects of the blockade on the Cuban people. Speakers will include Jose Ramon Cabañas, Cuban envoy to the US, Bárbara Montalvo Álvarez, Cuban envoy to the UK, Gloria La Riva, Presidential candidate for Party for Socialism and Liberation in the US, Valia Rodriguez, Cuban medical scientist, Dr Helen Yaffe, author and professor at the University of Glasgow, among others.