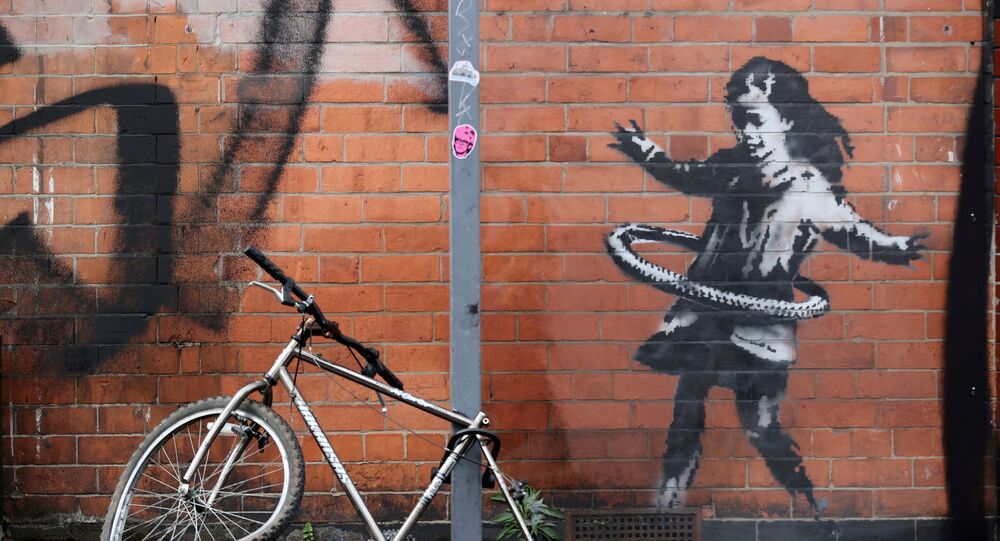 Residents in the city of Nottingham have been paid a visit by the legendary Banksy. Initially however, disputes erupted over the ownership of what many credited to be his piece.

The English street artist Banksy appears to have struck again, seemingly claiming a piece that recently appeared in Nottingham.

The work reportedly appeared on Tuesday October 17 and shows a small girl hula-hooping with a bicycle tyre. The image appears next to an actual bicycle chained to a post that is missing a back wheel.

Reports say that after it appeared, crowds of locals turned out to have their photographs taken next to the iconic artist’s latest piece.

Netizens took to Twitter to give their verdicts on the artwork.

Initially, questions surfaced over whether Banksy was really behind the piece. The Nottingham Post quoted a Birmingham-based artist by the name of ‘Itchers’ as taking credit for the work.

The 28 year old told the post that he wanted to “bring a bit of a joy” in these “dark times.”

“I was up in Nottingham not that long ago and I saw this bike chained up to the lamppost and I thought to myself: 'that looks like a sad old little bike,’” the man is quoted as saying.

“I thought I could cheer it up a bit by having a child playing hula-hoop with the tyre that wasn't there so I came up on Tuesday and painted it on the wall. It's something for people to enjoy, that's what it's all about. Everyone in Nottingham needs to stay safe, I know about the lockdown and the massive rise in Covid cases there so I wanted to bring a bit of joy in these dark times.”

However, in later reporting, the local news outlet confirmed that Baksy was indeed behind the work of art.

Banksy, whose identity remains anonymous, began his career as a street artist in the 1990s. Since then, he has produced numerous eye-catching stencils around the world, including in London, New Orleans, and Bethlehem in the Palestinian West Bank and Gaza Strip.