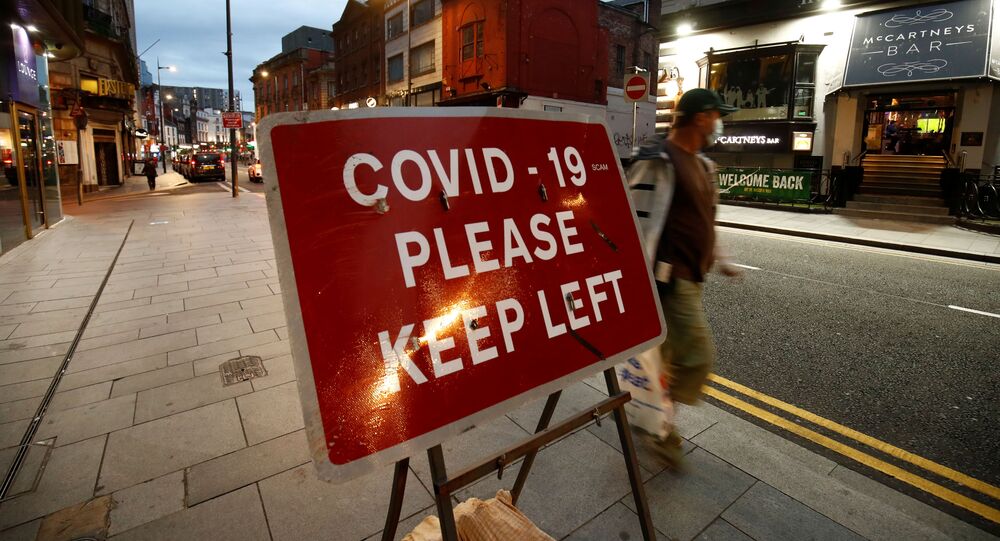 A consistent surge in coronavirus cases across the United Kingdom led Prime Minister Boris Johnson to announce a new three-tier system on Monday that puts different regions of the country under separate levels of restrictions, depending on outbreak severity.

However, the Prime Minister is believed to have overruled calls for a national lockdown that would have entailed shutting down all pubs and entirely banning household mixing, according to sources cited by the outlet on Monday night.

Warnings had been made by the Scientific Advisory Group for Emergencies (Sage) that failure to take swift national intervention measures could result in "a very large epidemic with catastrophic consequences", says The Telegraph, citing newly-released papers from Sage dated 20 and 21 September.

The announced three-tier system on Monday has seen Liverpool, currently regarded the worst coronavirus hotspot due to its high rate of COVID-19-related hospital admissions, become the only region to be slapped with the toughest of the new alert levels.

Intense negotiations regarding other areas of the country were believed to have proceeded on Monday night.

The cited Sage papers recommended the immediate consideration of five national measures that could be effective only if implemented in conjunction, writes the outlet.

"The shortlist of non-pharmaceutical interventions that should be considered for immediate introduction includes a circuit-breaker (short period of lockdown) to return incidence to low levels; advice to work from home for all those that can; banning all contact within the home with members of other households, except members of a support bubble; closure of all bars, restaurants cafes, indoor gyms and personal services (eg hairdressers); (and) all university and college teaching to be online unless face-to-face teaching is absolutely essential," the papers are cited as saying.

According to a related paper, it was stated that with over 90 percent of the population still highly susceptible to the novel respiratory virus, unless immediate measures were taken to bring down the number of cases, the result might be a “very large epidemic with catastrophic consequences in terms of direct Covid-related deaths and the ability of the health service to meet needs”.

The Sage documents are believed to have urged a package of interventions to ward off an exponential rise in cases, as single interventions were deemed unlikely to “reduce incidence.”

© AFP 2020 / LINDSEY PARNABY
Police patrol as revellers enjoy a night out in the centre of Liverpool, north west England on October 10, 2020 ahead of new measures set to be introduced in the northwest next week to help stem the spread of the novel coronavirus

The scientific advisers are also stated to have expressed doubts that measures applied in a “specific geographical area” would be efficient in dealing with the situation, underscoring the need for regional or national level moves.

Regarding the newly-announced three-tier system, a member of Sage, Professor Chris Whitty, the Chief Medical Officer, was cited as expressing doubt at a Downing Street briefing that "baseline" measures set to apply to Tier 3 – the very high alert level with the highest infection rates – would be enough to stem the tide.

"I am not confident, and nor is anybody confident, that the tier three proposals for the highest rates, if we did the absolute base case and nothing more, would be enough to get on top of it," he said.

Boris Johnson is claimed to have dismissed calls to impose harsh new lockdown measures on other parts of the North of England in the wake of indignation expressed by local leaders.

Recently, Mayors and council leaders issued statements warning they would not support the closure of pubs, gyms and leisure centres, as they would thus be complicit in bankrupting local businesses.

Johnson, however, is said to have warned local leaders that if they fail to comply with lockdown measures, they will be imposed by the Government "to protect public health".

However, some senior Tory MPs have also been gearing up to withhold their support when the three tiers are put to separate votes in Parliament on Tuesday.

Conservative MPs in the House of Commons slammed the new system, with Sir Graham Brady, the chairman of the 1922 Committee of backbench Tories, wondering if areas will not be left in a "permanent state" of restrictions.

"The Prime Minister has said there will be a four-week 'sunset' for areas in the highest restrictions. What reassurance can he give to areas in tiers one and two, some of which have had additional restrictions already for two and a half months, that this isn't going to become a permanent state?"

When unveiling the three-tier system, the Prime Minister said it was hoped the new approach would simplify the “confusing” rules imposed on different areas.

Tier 1 is a medium level that will apply to a greater part of England and be based on current rules, that presuppose no gatherings above 6 and a 10 p.m. curfew for pubs.

Tier 2 is a high alert level that will include a ban on household mixing indoors. These regions include Nottinghamshire, east and west Cheshire, as well as a small area of High Peak.

Tier 3 is the “very high” alert level, bringing with it the strictest measures for places worst hit by the virus. Household mixing will be banned entirely and all pubs and bars will be forced to shut down, unless they can operate as restaurants, as well advising against travel to and from those areas.

Liverpool earlier agreed to be designated as within the top tier, with Metro Mayor Steve Rotheram agreeing to close gyms, pubs and leisure centres.

The city will be receiving £14 million in extra funding to carry out more testing through the next month. Subsequently, the lockdown will be reviewed.

There was resistance to being put into the “very high” top tier alert level from local leaders in other areas, who demanded more support from the Government for businesses and workers impacted.

According to Boris Johnson, talks were still continuing with local leaders in the North-West, North-East and Yorkshire and the Humber regarding their moves if they were designated to the third tier.

RUSSELL CHEYNE
A worker carries a chair as he prepares to close a pub at Grassmarket, amid the coronavirus disease (COVID-19) outbreak, in Edinburgh, Britain October 9, 2020.

"We want to take local authorities with us... if we if we can't get agreement, then clearly it is the duty of a national Government to take the necessary action to protect public health," said Johnson, adding at a Downing Street press conference that the latest figures on infections were "flashing at us like dashboard warnings in a passenger jet, and we must act now."