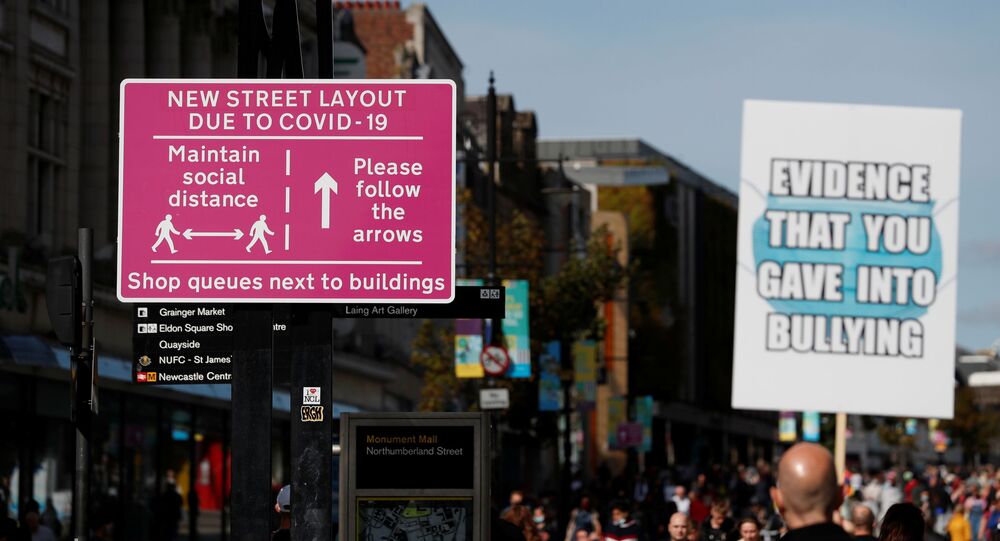 In May, the UK Government's Scientific Advisory Group for Emergencies (Sage) seemed to have been sidelined, with an expanded Joint Biosecurity Centre taking on a prominent role in co-ordinating the coronavirus response. The move had worried scientists, who said the new unit was "shrouded in mystery".

Senior MPs and scientists are rallying behind demands that advice issued to UK ministers by the Joint Biosecurity Centre (JBC), set up earlier this year to deal with the country’s coronavirus response, be made public, writes The Telegraph.

The government is being called upon to lift the shroud of secrecy surrounding the body that has been guiding local lockdowns enforced across swathes of the UK.

The JBC has never revealed either a list of its personnel or the details of its deliberations on key issues.

The JBC was set up in May this year to handle management of the nation's coronavirus response at a local level and consolidate advice given to ministers, in a move that seemed to suggest the government's Scientific Advisory Group for Emergencies (Sage) had been sidelined.

Professor Susan Michie, who sits on Sage, was quoted as criticising the lack of transparency over the move, and questioned as to why the work of the Joint Biosecurity Centre was "shrouded in secrecy".

Sage had earlier been similarly itself been widely censured for lack of transparency, and its membership was revealed months after the health crisis began.

The JBC reports to Baroness Dido Harding, head of the NHS Test and Trace programme and acting Chair of the National Institute for Health Protection. The Centre is responsible for setting the national alert level and subsequently recommending action to contain outbreaks.

This involves measures such as closure of workplaces, pubs, restaurants. It also advises on which countries should be added to or taken off the UK’s quarantine list, with recommendations subsequently reviewed and agreed by the chief medical officers of the four UK nations.

The center has an "insight team" for monitoring local spikes of the respiratory disease, and advises health officials and local authorities, reporting every morning to ministers, including the Health Secretary Matt Hancock.

It is believed that the JBC recruited dozens of academics, scientists and civil servants over recent time, many hailing from the UK’s Alan Turing Institute for data science and artificial intelligence, led by Clare Gardiner.

Gardiner is reported to have been seconded from her role as head of cyber resilience and strategy at the National Cyber Security Centre, a branch of signals intelligence agency GCHQ.

The JBC organisation falls under the control of the Department of Health.

Concerns over the coronavirus-related decision-making have been raised on the eve of the implementation of a new, three-tier system to enforce fresh lockdowns across swathes of the country due to a surge in COVID-19 cases.

While at the start of the pandemic Prime Minister Boris Johnson vowed "maximum possible transparency" over all advice driving the restrictions, senior MPs and scientists believe that the promise may have been broken.

Greg Clark, the chairman of the science and technology committee, was cited as suggesting that if the government wanted to maintain trust in its decision-making process amid the pandemic, the public "deserve answers".

"The transparency of the JBC is simply not good enough at the moment. Its role in the response to the pandemic is far too opaque, and that needs to change," he told The Telegraph. "These are important questions to which the public deserve answers."

The advice of the Joint Biosecurity Centre (JBC) to ministers is suggested as governing moves to enforce the recent controversial local lockdowns.

"First, we need to know more about the membership of the JBC – who are they? We also need to see the minutes of key discussions to understand the advice given to ministers,” said Greg Clark.

Clark added that the source of the evidence and data used to make conclusions should be made public.

“There are also questions over whether the role of Sage has changed, and how much responsibility has been handed over to the JBC. We need to know the reasons behind these changes," said Clark.

John Drury, a pofessor of social psychology at the University of Sussex who is a Sage sub-committee member, deplored the “baffling” secrecy around the staff and decision-making of the JBC.

"I know academics and scientists are involved, much like Sage, and yet we don't know who they are or how they are coming up with their advice. It's not acceptable," said Drury.

Government sources have fended off calls for transparency regarding the body, claiming it was “not appropriate" to release the identities of the center’s largely civil servant staff.

A Department of Health spokesman was quoted as saying:

"The Joint Biosecurity Centre supports decision-making. It does not make the decisions on specific measures or restrictions."

The spokesman added there was "a clear decision-making structure for local, regional and national restrictions, which is led by ministers and takes into account analysis and evidence from a range of organisations, including the JBC, NHS Test and Trace, Sage and Public Health England".