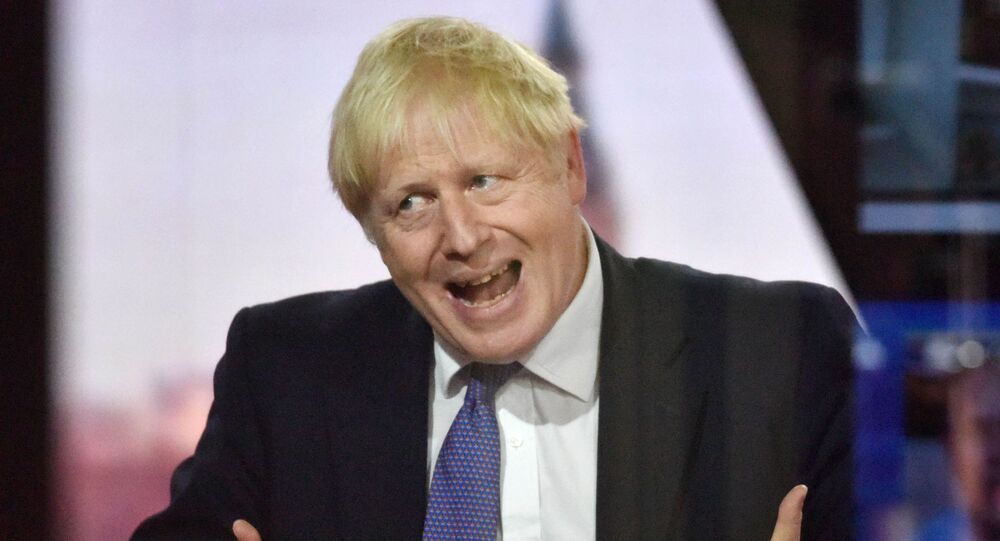 UK Prime Minister Boris Johnson's biography is anything but dull, reportedly studded with a succession of overlapping romances, failed marriages, and even a "secret love child".

A bombshell tell-all volume is about to offer a tantalizing glimpse into the colourful biography of Boris Johnson, writes The Sun.

Investigative author Tom Bower's book, Boris Johnson: The Gambler, is touted as going further than any other biography of the polarising figure that is the UK's PM.

Tom Bower's biography - Boris Johnson: The Gambler - will be published on the 15th October 2020.

​Set to be released on 15 October, the book by Bower aims to map the errant BoJo's journey from his "chaotic" childhood to Downing Street, while shedding light on a string of trysts sandwiched in between.

I'll wager that as a child Boris Johnson had a dressing up box, an extensive Action Man collection and an LP of the Village People's greatest hits. pic.twitter.com/bfz4td7aky

​Making ample use of accounts offered by Johnson's friends, the author suggests that the current prime minister's wayward ways were rooted in a "troubled" childhood and the influence of his father Stanley Patrick Johnson, a British author and former Conservative Party politician.

The current prime minister's "toxic childhood" is depicted in the book as having influenced his later life immensely. Bower claims there was a distinct "absence of any home warmth".

Johnson's sister Rachel Johnson, 55, is cited as recalling how their parents' divorce, which resulted in their mother suffering a nervous breakdown, had left the children feeling "abandoned". As for Boris, "denied his mother's embrace and the absence of any home warmth" while he was attending prep school at Ashdown House in East Sussex, there was a "vast emotional hole".

"Some called the result 'the frozen child'", says the author. One school friend was cited as telling Bower:

"We were the children of fathers who failed their sons, and created troubled boys".

Boris met first wife, Allegra Mostyn-Owen, at Oxford. They wed in 1987 despite her father warning her that he was "rapacious". The marriage was on the rocks by 1990. Later, the woman was quoted as saying:

"Boris's game plan was influenced by what Stanley had done".

The author adds that Johnson's refusal to make the marriage work was due to the influence of his father, and an inherited "inability to take women seriously".

Boris Johnson the "womaniser" is described in bright dabs of technicolour, writes the outlet.

A passionate tryst with journalist Petronella Wyatt, 52, is detailed with particular zeal. The romance dated to when "Bonking Boris", as he was dubbed, worked as editor of The Spectator.

Incidentally, the author claims the publication itself bore the colourful nickname "The Sextator", due to reportedly widespread affairs between staff.

In 2001, Boris Johnson married second wife Marina Wheeler. However, after a love note he had written to Petronella was discovered by her on his desk, an on-off affair ensued.

Boris Johnson was racked with guilt and jealousy, and even threatened suicide, says the author.

After discovering that Petronella was pregnant, Boris urged her to have the child. Unwilling to be a single mother, "she insisted that they should marry".

After a standoff, Johnson consulted a divorce lawyer before confessing the affair to his wife Marina, with whom he has four children, and vowing to end the tryst.

The affair continued, however. A year later she presented him with an ultimatum. He was either to marry her or move on.

​While not agreeing to marriage, Boris did not leave his mistress, either. According to the book, Johnson was on holiday in Sardinia with his wife and children, only to discover that Petronella was in Tuscany. So he "ditched" his family and flew to see her.

"He climbed the walls of Petronella's villa and declared that his impulsiveness and bravery proved his love. But again he returned to Marina".

The book tells how Petronella became pregnant again in 2004, choosing to go ahead with the pregnancy, but suffered a miscarriage. Boris Johnson had even arrived "in disguise" to see her in hospital.

The author claims that despite the "humiliation", Marina, who had changed the locks to their house and taken off her wedding ring, allowed her errant husband to return. At which point Johnson reportedly revealed to her how "his father had hit his mother".

Boris Johnson's affair with art dealer Helen Macintyre, 46, started in 2009, with the woman giving birth to a girl a year later, says the book.

Maybe David Vance would like to address this. This is Helen Macintyre pushing Stephanie. She is Boris Johnson's 2nd youngest child. (6 from various women) and she was born after Boris cheated.

Boris refused to acknowledge her and even went through the courts to hush it up. pic.twitter.com/fwnCAvuJcF

​Macintyre is described as having waged a legal war to keep the identity of her child's father a secret but in 2013 she lost. The woman's boyfriend at the time, financier Pierre Rolin, is quoted as having slammed Johnson as a man with no "moral compass".

"He thinks he is completely entitled. One day the truth will catch up with him".

The book by Bower suggests that Boris Johnson's affair with California woman Jennifer Arcuri, 35, began after the then 26-year old "targeted" Johnson when he was London mayor, in 2011.

© Photo : Facebook/Jennifer Arcuri
Boris Johnson, then-Mayor of London, speaks with Jennifer Arcuri at an event organised by her company, Innotech, in London on 30 October 2013.

BoJo's aides are cited as saying the US digital entrepreneur had sought out Johnson to boost her business, and after meeting him, filed his number under "Alexander the Great", in reference to his real first name.

According to the book, a "depressed" Johnson was drawn to Arcuri because she represented a "partly mother figure and partly lover" to him. Arcuri herself is cited in the biography as revealing:

"I fell in love. I never admitted how much I loved him".

According to Bower, after stepping down as mayor in 2016, Johnson and the American businesswoman parted ways, with Arcuri later marrying, giving birth to her first child and blocking her former lover's calls.

Their relationship began in 2018 and was the "final straw" that ended his 27-year marriage to "incredibly loyal" Marina.

BREAKING: Boris Johnson and his wife Marina Wheeler have announced they are to divorce. More follows... pic.twitter.com/pHYli0VW0A

"Marina was emphatic. She couldn't take his infidelity any more. She explicitly blamed his father, Stanley. All Boris's worst qualities stemmed from that relationship".