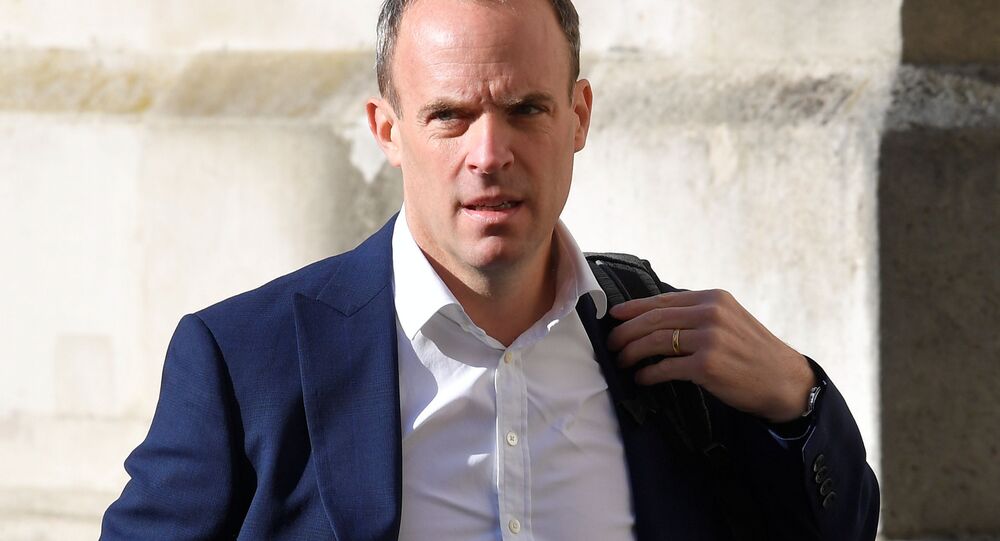 UK Won't be 'Held Over a Barrel' by EU Any Longer, Says Foreign Secretary Raab

The United Kingdom is geared to leave the European Union at the end of this year. As negotiations over the details of a trade agreement stall as the deadline to reach a deal edges closer, prospects of leaving without a deal become increasingly likely.

British foreign secretary Dominic Raab said on Saturday that Britain will not continue to be treated unfairly by the European Union and that a future trade deal must reciprocal.

"Yes, we want a Free Trade deal with the EU, but any deal must be fair. The days of being held over a barrel by Brussels are long gone," Raab said in a speech broadcast on Saturday at the Conservative Party's annual conference.

Johnson said that the UK is "ready" to leave the bloc with no deal if need be but reiterated his commitment to reaching a trade agreement.

"The balance of trade is overwhelmingly on the side of the EU in the sense that they export much more to us than we do to them, certainly in manufacturing goods, and so we think there is a big opportunity for both sides to do well", he said.

Mrs von der Leyen urged for talks to "intensify" to settle their differences, as the October deadline approaches. She said she hopes the video call on Saturday afternoon would produce a pathway to a deal but is likely to also demand compliance with EU competition rules in return for single market access.

The call was echoed by Prime Minister Boris Johnson who pledged to "work intensively" to secure a post-Brexit free trade deal after talks were held.

"They instructed their Chief Negotiators to work intensively in order to try to bridge those gaps", Johnson's office said, adding: "They agreed to speak on a regular basis on this issue."

David Frost the UK's chief negotiator said later in a statement that he was instructed to work with his EU counterpart Michel Barnier to bridge the gaps.

Frost also said he would begin as soon as he could next week to try to mend the "significant gaps" that remain between the two sides.

"That work begins as soon as we can next week", said UK chief negotiator David Frost in a twitter post on Saturday

​According to the EU, in order for a "fair deal", to be reached, Europe wants access to UK fishing waters for its boats, while the UK has prioritised access "first and foremost for British boats".

As for Northern Ireland, which under the Withdrawal agreement would remain effectively in the Customs Union to prevent a hard border on the island, Westminister has insisted increased sovereignty not laid out in the terms of the withdrawal.

The EU says it will refuse to sign a new trade agreement as long as the aspects of the internal market bill which contradict the Withdrawal Agreement remain in place.

The United Kingdom formally left the European Union in January this year but remains in the bloc trading bodies until the transition period ends on 31 December.

Throughout the year, both sides have been in negotiations over what a future trading arrangement would look like but have stalled in recent months, leading to concerns that the UK could leave without a deal.