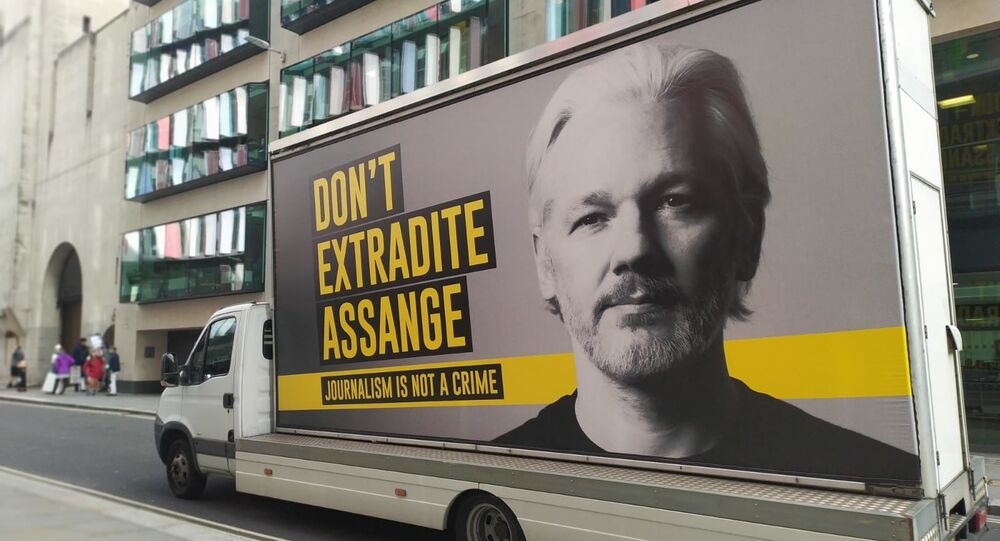 If Mr Assange is extradited to the United States he can expect to be restricted to a small prison cell, in pre-trial detention, at least 22 hours a day, segregated from the general population and with no contact with other inmates, a US criminal defence lawyer explained to the Central Criminal Court of England and Wales on Monday.

Julian Assange is likely to face conditions, in pre-trial detention in the US, which are "essentially the same as solitary confinement", the Old Bailey heard on 28 September 2020.

Mr Yancey Ellis, an experienced criminal defence lawyer who is based in Alexandria, Virginia told the court on Monday that he is “very familiar” with the Alexandria Jail (Alexandria Detention Center - or ADC) which both the government and the defence say Mr Assange is likely to be housed in should he be extradited to the US to face espionage.

“I have visited the Alexandria jail on many occasions”, the former Judge Advocate with the US Marines told Edward Fitzgerald QC, for the defence, adding that it is "the most common place for pre-trial defendants to be held in Alexandria".

If he is extradited the WikiLeaks publisher will tried at what is commonly referred to as the 'espionage court', where the jury will likely be made up of members of the CIA, the FBI, the Department of Defence and Homeland Security, or their families, according to CIA whistleblower John Kiriakou.

© AP Photo / TOLGA AKMEN
What Could Wikileaks Founder Julian Assange Face if Extradited to the US on 18 Counts of Espionage?
Mr Ellis explained that Mr Assange would also likely be kept in administrative segregation, also known as "X-Block", in the ADC. "High-profile" defendants are often placed in "protective-custody", and the administrative segregation Unit "is one of the few places in the Alexandria jail to do that", Mr Ellis explained in his statement for the court.

Cells in the X-Block are around 50 square feet or less, with a shelve containing a mattress, a metal toilet and a metal sink and "not much else besides that", Mr Ellis told the court.

He added that while prisoners are entitled to one to two hours a day out of their cells, with the other 22 or more inside of them, in practice inmates will get an hour or less out of their cells a day. This is because inmates in administrative segregation are meant to be excluded from other prisoners so, due to scheduling concerns, the second hour offered is often "at very odd hours" and so inmates often decline to make use of the second hour.

"You Almost Have to Scream at the Top of Your Lungs", to Communicate in Administrative Detention

Mr Fitzgerald asked the witness for his response to statements made by Assistant US Attorney Gordon Kromberg in which the AUSA said prisoners in X-Block can speak to each other via the windows or through the cell doors.

"Its almost impossible" to speak through the door if the food slot is not open, Mr Ellis said, adding that whenever he has visited inmates at X-Block he has had to ask prison staff to open the food slot. "For anyone to make that assertion it is almost as though they have never tried or are not familiar with the location where X-block is located", Mr Ellis asserted.

"I have tried [to speak to clients through the cell doors], you almost have to scream at the top of your lungs", Mr Ellis told the court. "That’s the point of the Administrative Segregation Unit which is to keep the inmate away from other inmates in the unit. Its not meant to give him access to other inmates" Mr Ellis said.

Similarly, Mr Ellis challenged the idea that Mr Assange would have access to programmes in administrative segregation because to his knowledge there are no individual programmes and the group programmes (eg for drug addiction or education) would be off-limits because inmates in X-Block are not entitled to have contact with other inmates.

For that reason Mr Ellis described, in his statement, the conditions in X-Block, where Mr Assange will likely be held, as "essentially the same as solitary confinement".

If Mr Assange is subjected to Special Administrative Measures (SAMs), which the government have accepted that Mr Assange may face, then any further restrictions such recordings of conversations with lawyers or family, restrictions on mail and communication with the outside world, would be added on top of that.

He also explained that often "the courts will defer to the jail in how they house inmates and secure facilities" and that he doesn't think the court would interfere with such arrangements.

Crucially the court was also told that the ADC jail "doesn’t employ a doctor" though there is contract for part-time access to a psychiatrist. Often with Mr Ellis' clients they go with several weeks without seeing a psychiatrist and there wasn’t “a close enough monitor on things like medication". The court has already heard expert testimony that the conditions Mr Assange would face, should he be extradited to the US, combined with his being mildly clinically depressed as well as being on the autistic spectrum, means that the award-winning journalist and publisher is at high risk of suicide.

© Sputnik . Screenshot
Assange is at 'Very High Risk of Suicide' Should Extradition Occur, Neuropsychiatrist Tells Court
Prosecution expert Professor Seena Fazel agreed that Mr Assange's risk of suicide would go up or down depending on whether he was given a life sentence (or effective life sentence) or not. A separate government expert, Dr Nigel Blackwood, described Mr Assange as a "resilient man" who can resist any suicidal impulse if he is extradited.

Chinese artist and dissident Ai Weiwei attended to the court hearings during the morning testimony of Mr Ellis. He explained to Sputnik that in his view the regime described "Basically [...] keeps someone still alive, but not really alive":

"Basically it keeps someone still alive but not really alive" Chinese artist and dissident Ai Weiwei says regarding the solitary confinement-like conditions Mr Assange would be held in the US, as described by defence witness Yancey Ellis.

"It's a horrible situation, I hope Assange will never be treated that way. It's inhuman and it's not fair for a political prisoner like [him]", Mr Ai Weiwei added.

James Lewis QC briefly cross-examined Mr Ellis. The prosecution lawyer asked Mr Ellis whether he excluded interaction with lawyers from his definition of solitary confinement-like conditions. "I wouldn’t have counted interaction with your lawyers", Mr Ellis responded. He also explained that the maximum a lawyer can meet with a client is for three hours at a time unless they had "special permission" from the ADC to extend the time to up to six hours.

Mohamed Elmaazi
US Doctor Who Examined Assange In Ecuadorian Embassy 'Severely Disturbed' Over His Deterioration
Mr Lewis then queried if Mr Assange had "a phalanx of lawyers looking out of him" whether they would have the opportunity to criticise his conditions of detention.

"I guess they could, I’m not sure what that would do" Mr Ellis responded. When Mr Lewis questioned whether Mr Assange would not be treated as an "ordinary prisoner" the defence lawyer insisted that "To my knowledge the Alexandria jail doesn’t give anybody special treatment". "So, you don’t think because of his ability to attract publicity and support it's possible he could get better care than an ordinary prisoner?" Mr Lewis asked. "I do not", Mr Ellis answered.

Mr Assange faces to up to 175 years in prison if he is convicted of all of the charges levied against him in the US. The indictment almost entirely relates to his role in publishing the Iraq and Afghanistan war logs, Guantanamo Bay detainee files and diplomatic cables that revealed war crimes as well as other criminality and abuse committed by the US government and US-backed forces around the world. The substantive hearings in his case are scheduled to finish on Friday.

‘Torment’: Assange Spends Up to 23 Hours a Day in ‘Sordid’ Solitary Confinement, His Father Says