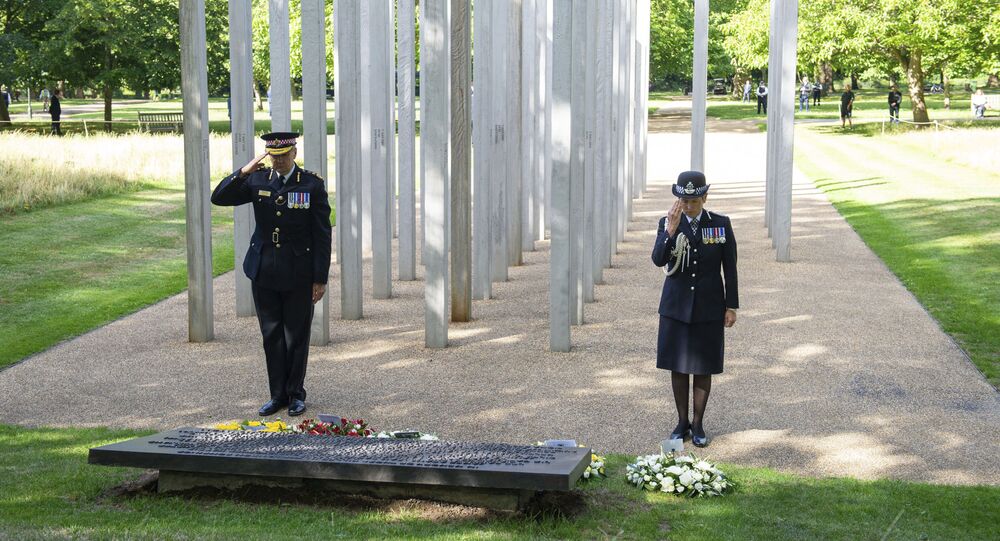 As anti-police sentiment appears to rise in the United Kingdom, the force looks to memorialise those who have fallen in the line of duty and appeal to the "silent majority" who support law enforcement measures.

The chair of the UK's Police Federation has said that violence against law enforcement officers has increased in recent years, following the deaths of a Camden police officer.

"What we've seen over the past few years is the level of violence which has increased. In the 'old days', if somebody wanted to escape arrest they'd assault a police officer and off they'd run", said John Apter while speaking to Sky News on Sunday.

Apter, who heads the organisation representing 12,000 rank and file officers in England and Wales, said that law enforcement is now monitoring violence against police officers much better "but we are a more violent society without a shadow of a doubt and my colleagues are on the frontline of that and unfortunately facing some of that violence".

He added that policing in the "not too distant past" has been "vilified by some politicians" but the force is "in a better place now".

"I accept we won't always get things right but when you compare us to policing in other parts of the world the public are getting a good deal with their police. We are the best police service in the world".

Mr Apter claimed that there is a "silent majority" who support for the police, citing a survey during the coronavirus crisis, which found that 90% of the public back the current policing style.

On this National Police Memorial Day let’s show appreciation for the sacrifice and service of our police officers. Listen to our National Chair John Apter @PFEW_Chair on @SkyNews this morning. #NPMD20 pic.twitter.com/cTTJurkXw0

​The interview comes on National Police Memorial Day, on which a remembrance service is planned to honour officers who have lost their lives while on duty is planned.

It will be held online for the first time in its 17-year history amid ongoing coronavirus restrictions, with the Prince of Wales leading the ceremony.

Today is #NPMD20, a day to remember, reflect and honour the courage and ultimate sacrifice of police officers throughout the UK. Please join the virtual service at 3pm if you can, if you can’t please take a moment to think of those we have lost. https://t.co/8f3uoJ61Xm pic.twitter.com/YYbH0EtAwN

​Among those who will be honoured is Sergeant Matt Ratana, who was killed by a handcuffed suspect near Croydon Custody Centre in south London on Friday.

In August last year, PC Andrew Harper lost his life while responding to a burglary report in Berkshire becoming the first officer to be killed while on duty since March 2017 when PC Keith Palmer was stabbed to death by Khalid Masood during the Westminster Bridge terror attack.

Office for National Statistics (ONS) data appears to corroborate the claim by the federation chief, 10,399 alleged assaults that caused injuries against officers taking place last year, a 32% increase from 7,903 in 2015 - 16.

A total of 20,578 assaults on front line officers who did not receive injuries were also reported.

All recorded assaults against officers have jumped 18% in the 12 months to March 2019 when compared to the previous year.

This comes amid a backdrop of demands from anti-racist organisations in the UK to see the police defunded or abolished, following a series of deaths of black people and alleged brutality at the hands of law enforcement in the US and in Britain.