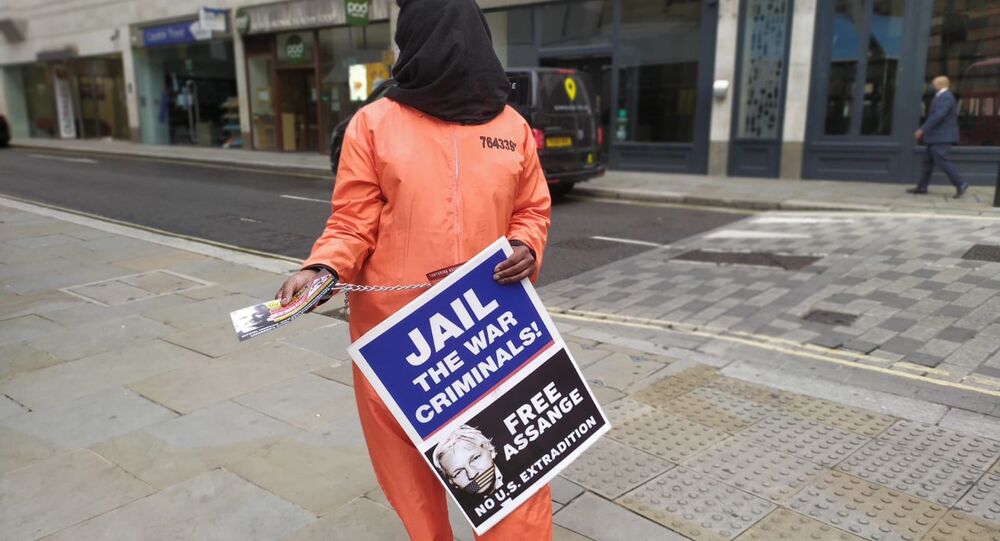 The government has argued that the WikiLeaks publisher isn't at high risk of suicide should he be extradited to the US where he would face a trial on espionage charges related to his role in publishing classified documents pertaining to diplomacy, the wars in Afghanistan and Iraq and the treatment of detainees at Guantanamo Bay.

Dr Sondra Crosby, a medical doctor from the US who treated Julian Assange whilst he was in the Ecuadorian Embassy with asylum, told the Old Bailey on Thursday afternoon that Mr Assange described symptoms of depression and PTSD when she saw him in October 2017.

During her second visit she observed that Mr Assange's mental state was "declining and [he] was describing more and more symptoms" of depression, sleep disturbance, low mood, inability to concentrate, and nightmares. In February 2018 the WikiLeaks publisher first described "his thoughts of suicide" to her, the doctor explained, noting that he was spending "quite a lot of time on how he had been thinking about this". Dr Crosby said that Mr Assange reported binge watching the suicide of Bosnian-Croat Slobodan Praljak who took his own life using cyanide on TV, in court, following the affirmation of his sentence for war crimes.

​The doctor, who is also an expert in psychological effects of torture, then noted that when she saw him again in February 2019 Mr Assange "had markedly deteriorated" both physically and mentally and that she was "very concerned about a very advanced tooth infection" causing him "excruciating pain" on a daily basis and which was requiring him to take narcotics. She also noted that Mr Assange was too frightened of the consequences of seeking support outside the embassy and that his thoughts of suicide had increased.

Dr Crosby said that when she visited the award-winning journalist in October 2019, this time in Belmarsh prison, "he appeared to me to be severely depressed" and talked about thinking of suicide hundreds of times a day. She said Mr Assange had markedly changed in affect and appearance, couldn’t remember names and things and had an inability to write letters.

She also noted that Mr Assange told her "he was not revealing the full extent" of his depression and suicide plans to prison officials and doctors. Dr Crosby said that was something she commonly sees in prisoners because they fear that "if they reveal their plans or extent of suicidal ideation" they may be put under more surveillance or even put into isolation "which would be worse" and they want to avoid that. She added that there is also sometimes an issue with trust between inmates and the doctors available in the prisons.

Mr Assange talked about suicide to Dr Crosby and told her that he had hidden two implements away, that were subsequently confiscated, and he talked “as though he was essentially dead” and seemed to be in “very dire straights”. One thing which appeared to help was his access to the Samaritans - an anonymous suicide hotline - that he could access to a daily basis.

“I think Mr Assange is at very high risk of completing a suicide if he were to be extradited” Dr Crosby said, in response to a question from Edward Fitzgerald QC for the defence.  She added that she believes that "incarceration in the US is a risk factor for injuries and I worry that he would be at increased risk for fractures”, due to his weak bones which are consistent with brittle bone disease.

James Lewis QC, for the prosecution, asked the doctor if it was fair to say that she is "fairly sympathetic to his cause"?

The doctor responded "No, that would not be fair to say at all."

"You talk about him being confined to the embassy when in fact it was his own decision to breach his bail conditions" Mr Lewis said to the doctor, asking why she used such language in her report.

Dr Crosby said that she thought that is "a complicated question and based on his psychological state I would say it is debatable". The psychologist likened it to someone feeling like they were chased into a room by someone with an axe and not coming out.

In response to a further question about whether all of Mr Assange's physical health concerns had been addressed the doctor noted that whilst much has been done his  osteoporosis has not been fully evaluated in her opinion.

"You know there have been a number of very experienced psychiatrists giving evidence in this court" Mr Lewis said to Dr Crosby, adding that all of them have had "much more recent" contact that her.

She agreed saying "Yes, my last contact was in Jan 2020. I have not had recent contact with him since".

"Are you saying that your opinion on mental health should be preferred over theirs?", Mr Lewis asked.

"I have never said that", Dr Crosby responded.

© Photo : Mohamed Elmaazi
Assange is a 'Resilient Man' Who Isn't at Risk of Suicide If Extradited, Government Expert Says
The cross-examination ended with Mr Lewis asking Dr Crosby about her reliance on the report by UN torture expert Nils Melzer.

Dr Crosby said that she ignored the political assessments as not relevant and only relied upon the testimony of the "two highly qualified medical experts"  who found that Mr Assange suffered from the effects of psychological trauma and was in poor health which was the same conclusion I came across.

Mr Lewis asked Mr Crosby if she was aware that no one ever extradited from the UK to the US has ever committed suicide. She responded that she's not an expert in extradition or statistics of extradition from the UK.