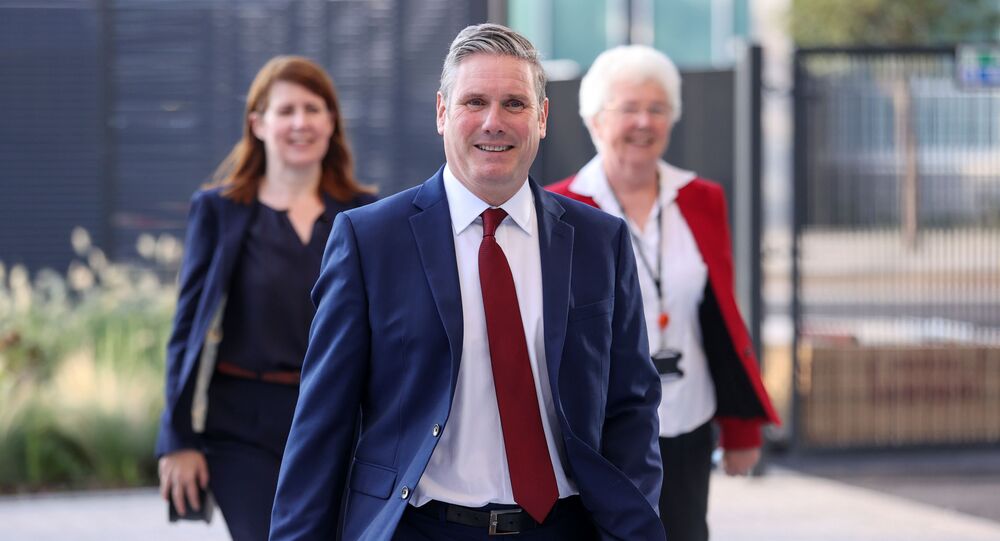 Sir Keir Starmer was elected leader of the Labour Party earlier this year - defeating left-winger Rebecca Long-Bailey. He inherited a party that had lost four general elections in a row to the Conservatives.

Labour leader Sir Keir Starmer has given his first speech to the party conference - albeit online - and his tone was altogether different to Jeremy Corbyn, with an appeal to patriotism and to family values.

Starmer, speaking in front of a red brick wall in the town of Doncaster in the north of England, told Labour Party members: "We are becoming a competent, credible opposition but that is not enough. I didn’t come into politics to be in opposition and neither did you. I came into politics to change lives. But you don’t get permission to act unless the public trusts you."

My vision for Britain is simple:

​In December 2019, the Labour Party was heavily defeated by Boris Johnson's Conservatives, who won many safe Labour seats in the so-called Red Wall, by promising to "get Brexit done."

Starmer’s speech was also a veiled dig at his former party leader, Jeremy Corbyn, who was perceived by many voters as untrustworthy and incompetent.

Time to say when I was a young article clerk I worked with @Keir_Starmer on the McLibel trial and he was and still is the single most impressive person I’ve ever worked for.

Labour are very lucky to have him.

And that was a great speech.

The speech was clearly an attempt to bring Labour back towards the centre, after four years on the left of the political spectrum under Corbyn.

"In the last 75 years there have only been three Labour winners. I want to be the fourth."

He says the key is not to look back, but to look forward.

​Starmer said: "To those people in Doncaster and Deeside, in Glasgow and Grimsby, in Stoke and in Stevenage to those who have turned away from Labour, I say this ‘we hear you’."

"I ask you, take another look at Labour. We're under new leadership. We love this country as you do," added Starmer, a former Director of Public Prosecutions.

The impressive thing from Starmer isn’t his delivery (he’s an average speaker) but his strategic focus. Absolute clarity about where he wants to take his party. First Labour leader to do that since Blair. (Corbyn had a clear direction but his first speech was an incoherent mess).

​Starmer’s speech - which was greeted with derision by many Corbyn supporters - is believed to have been heavily influenced by Labour’s new director of policy Claire Ainsley, former head of the Joseph Rowntree Foundation think tank.

Ms Ainsley has described the values of working class Labour voters as "family, fairness, hard work and decency" which has been summarised as "flag, forces, family".

Sir Keir Starmer is Tony Blair in a mask. He looks, sounds and feels like 1990's Tony. It's not a good look, it's just really freaky. 😞

​There was also a nod towards former Labour voters in Scotland, most of whom have defected to the SNP since 2015.

Starmer promised to be a leader for all of Britain - England, Wales, Scotland and Northern Ireland.

Labour lost the Red Wall because of the #PeoplesVote policy Keir Starmer supported.

Now Starmer has the nerve to blame Corbyn.

​Starmer - whose first act as leader was to try and repair relations with the Jewish community after accusations of anti-Semitism during the Corbyn era - said a Labour government would properly fund public services, create a world-class education system, and become "an active force for good in the world.”

A general election is not due until 2024, and the Tories have a majority of 80, so it is unlikely they will be forced to the polls before then.

Absolutely brutal personal attack by Keir Starmer on Boris Johnson, in his virtual conference speech now. Not just going for him over competence, but studs in on his character too. Unexpected. pic.twitter.com/UZ4sKfiECH

​The British government’s priority at the moment is tackling the coronavirus pandemic and Starmer claimed Boris Johnson’s government had failed to get a grip on the situation.

"Instead of getting a grip, the government has lost control. Our testing system collapsed just when we needed it most," said Starmer, adding: “There should be nothing inevitable about a second lockdown.”

Corbyn's Labour was demonised for championing internationalism and an inclusive collectivism, supporting migrant and minority rights. Now it seems Labour is going out of its way to disassociate from those values.

​A YouGov opinion poll published on Friday, 18 September, had Labour and the Conservatives neck and neck on 40 percent each.

The killer of Jo Cox screamed "Britain First" and it's now the Blue Labour slogan https://t.co/LK8oOYDxhO