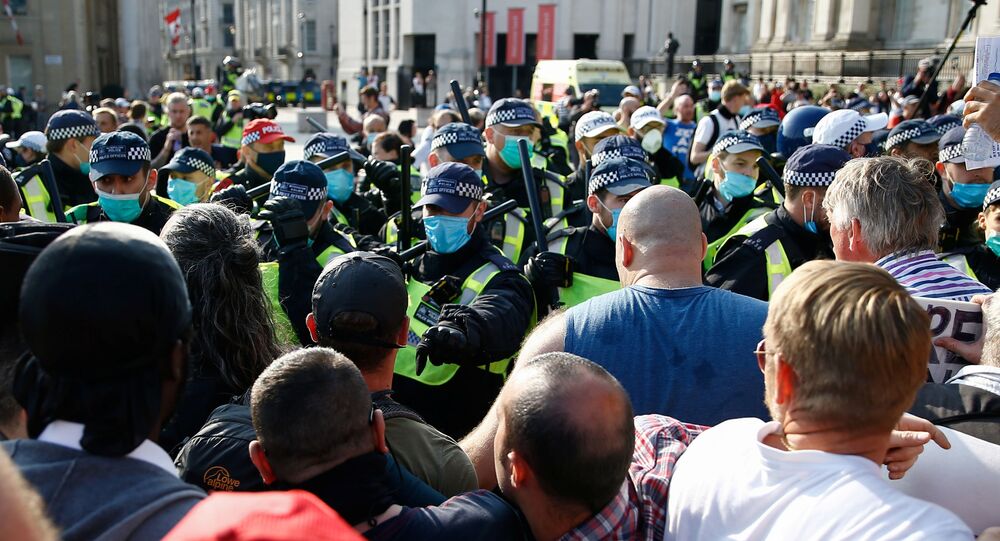 This comes as the UK has confirmed 4,422 new daily cases of the COVID-19 infection on Saturday, which is the highest daily total since early May.

Clashes were reported between police officers and some of the protesters in London's Trafalgar Square earlier in the day after the law enforcement tried to disperse the crowd during an unauthorised rally.

Thousands of people took part in the protest against coronavirus restrictions, violating 'the rule of six' announced by Prime Minister Boris Johnson earlier this week amid a rising of COVID-19 cases in the country.

​The protesters were maskless and some of them carried signs which read: "COVID is a hoax," "Plandemic," "This is now tyranny". Also, they slammed the way the pandemic has been covered by the mainstream media and suggested "media distancing" instead of social distancing. Demonstrators also called for the resignation of advisers on the government’s Scientific Advisory Group for Emergencies, the London Evening Standard newspaper said.

​Law enforcement officers in the UK capital of London have ordered protesters taking part in a demonstration against the government's coronavirus-related lockdown measures to disperse from Trafalgar Square, the Metropolitan Police said in a statement on Saturday.

Protesters have remained in the location despite being encouraged by law enforcement officers to leave, prompting the police to take action, the Met said.

"This, coupled with pockets of hostility and outbreaks of violence towards officers, means we will now be taking enforcement action to disperse those who remain in the area. Those who remain may get arrested," the statement read.

Several anti-lockdown protests have been held in the UK since the start of the pandemic. As many as 19 people, including Piers Corbyn, the brother of former Labour leader Jeremy Corbyn, were arrested at a similar demonstration at London’s Hyde Park in May.