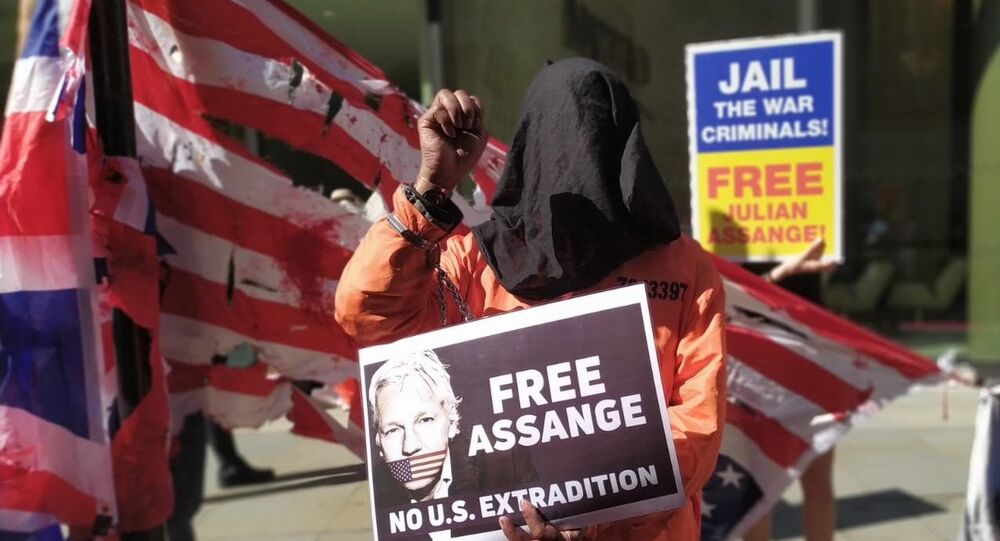 Even if Julian Assange's trial in the US "goes brilliantly" he can expect to be sentenced to a minimum of 20 years in prison following a conviction but could still go as high as 175 years, defence expert and criminal defence lawyer Eric Lewis told the Old Bailey on Monday.

The decision by the administration of US President Donald Trump to charge WikiLeaks publisher Julian Assange with 18 criminal offences (including 17 under the Espionage Act 1917) is "an abuse of the criminal law enforcement power”, Attorney Eric Lewis told the Old Bailey on Monday.

Mr Lewis, an expert witness for the defence, explained that no publisher "ever" had been successfully prosecuted under the Espionage Act before. He also noted that Mr Assange was not indicted until April 2018, long after the Obama administration reportedly concluded that it was not possible to prosecute Mr Assange and WikiLeaks without opening up the possibility of establishment outlets such as the New York Times being prosecuted. He clarified at the outset that he was not a member of the justice department and so doesn't have inside information but rather was speaking as an experienced observer and legal practitioner in the field of national security.

​Mr Lewis also told defence barrister Edward Fitzgerald QC that, if convicted, the award-winning journalist is likely to be sentenced to imprisonment that will go on for the rest of his life.

"As someone who is experienced at looking at indictments and advising clients.. this indictment and particularly the second superseding indictment all point to a very aggressive approach to sentencing on the part of the government. All signs point to a very long sentence measured in many decades", he added.

John Rees also told @SputnikInt that the court heard arguments that even in the "best case" scenario, if Mr Assange is convicted he could face around two decades in prison. pic.twitter.com/B9juJ6sRcc

​Mr Lewis has represented numerous clients charged with so called national security offences as well as detainees of the US military installation based in Guantanamo Bay, Cuba.

Mr Lewis, who is also Chairman of the human and civil rights organisation Reprieve, explained that US Secretary of State Mike Pompeo, when he was appointed as Director of the CIA, a man he characterised as "quite a distinguished lawyer as well", made remarkable statements regarding Mr Assange and WikiLeaks.

The expert noted that Mr Pompeo described WikiLeaks as a "non-state hostile intelligence service often abetted by state actors like Russia" and its co-founder Mr Assange as a "darling of terrorists",  "fraud—a coward".

Trump, John Bolton, and Mike Pompeo have criticized the ICC, and President Trump has issued an ‘Executive Order on Blocking Property Of Certain Persons Associated With The International Criminal Court.’

​He also noted that former US Attorney General Jeff Sessions - who "made clear that he thought that it was a priority for the justice department to arrest Mr Assange" - according to news reports pressured prosecutors at the Eastern District of Virginia to look again at the case. Mr Lewis said that Attorney General Sessions had been reportedly pressured by the president to go harder on the case.

Mr Lewis also made clear that based on his experience it is quite likely that Special Administrative Measures (SAMs) will be applied to Mr Assange pre and post-conviction. Under such circumstances a prisoner is not permitted to speak to other prisoners (though sometimes they can use the ventaliator system) and would live in near isolation for most of every day. The ability for defendants and potentially lawyers to speak to the public if a SAM is in effect is also greatly, if not completely, curtailed.

John Rees (@JohnWRees), of WikiLeaks official Don't Extradite Assange Campaign (@DEAcampaign), explains his view of the "damning" evidence presented during the first half of the day of expert witness Eric Lewis regarding prison conditions in US nat sec cases.

James Lewis QC (no relation to Eric Lewis), acting for the prosecution, challenged both the accuracy and objectivity of defence expert Mr Lewis. He asked whether Mr Lewis was being paid by the defence (he is at about £100 per hour near "legal aid rates").

The prosecution questioned why Mr Lewis hadn't reported the fact that he had made some public statements critical of the prosecution of Mr Assange, after the indictment was revealed, "as a disclosure of interest" in his expert testimony. He answered "I am not an English lawyer those are matters of public record and certainly if they should have been in the bundle then they should have been in the bundle", adding that his statements which he still agreed with now could have been secured via a "Google request in five seconds".

Extensive time was spent on the nature of prison conditions in the US, both for normal prisoners in super-max prisons as well as for those charged with national security offences and subject to SAMs. James Lewis QC pointed to decisions by the High Court and the European Court of Human Rights which concluded that defendants could still have a fair trial and access sufficient medical services, including mental health services, when they needed them and that there were adequate procedural safeguards for defendants.

This re: Babar Ahmad and from @fairtrials is relevant, especially: "Court paid tribute to the procedural safeguards in place in the American legal system, considering them sufficient to ensure respect for human rights." #Assange pic.twitter.com/MdCwzG1DTf

​Mr Lewis responded that a number of years had passed since those decisions were made and that his comments were based upon his actual experience as a criminal defence lawyer and those of others that he knew.

From 2017 report on SAMs in federal prisons by @theCCR and Yale Law human rights clinic: "In numerous cases, the Attorney General recommends lifting SAMs after the defendant pleads guilty."

SAMs are used by US Justice Department to coerce guilty pleas. #Assange pic.twitter.com/pRt19CsJj0

This was not mentioned in court, but a few of the details in it did come up. So sharing this as it involves conditions at ADX Florence, a supermax prison where Assange may be confined https://t.co/zl5Uizrand

Technical issues derail proceedings for the rest of the day

The inability to secure a proper video link between the court and Eric Lewis, who is based in the United States, resulted in the second half of the day being lost. Multiple journalists, including observers working for WikiLeaks, complained of being bumped off from the video link service with a number not being able to make their way back in. This is the first major technological disruption to be experienced by the court ever since Mr Assange's substantive extradition hearings recommenced on 7 September 2020, though they are reminiscent of the problems faced by journalistic observers in prior months.

Sputnik will continue to monitor the extradition hearings having been granted access to view them via secure video link.