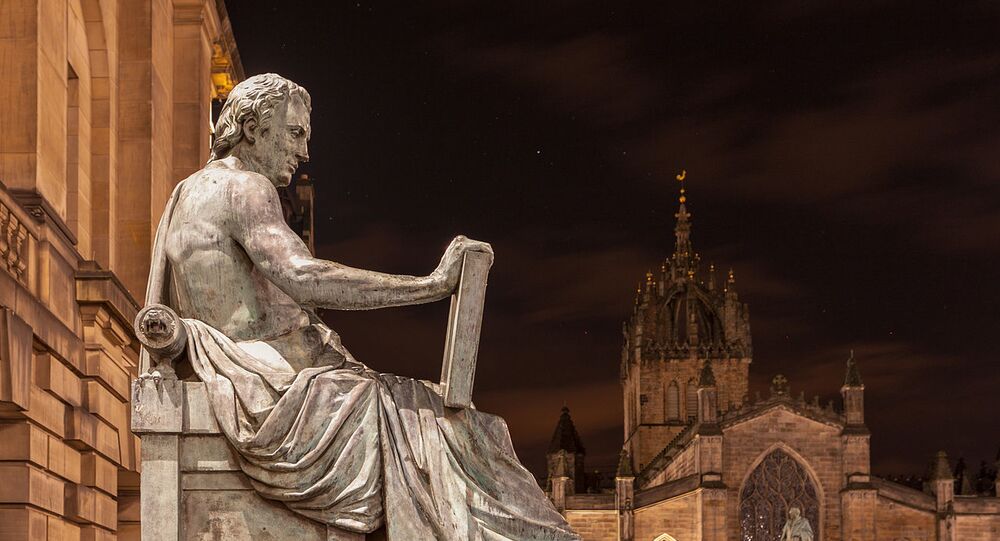 Dr Felix Waldmann, a former Hume Fellow at the University of Edinburgh, argued in July that the 18th-century philosopher was directly involved in the slave trade based on a single letter he unearthed. But university history Professor Tom Devine warned against judging historical figures by modern standards.

Historians and politicians have accused Edinburgh University of "spinless" surrender to demands to remove philosopher David Hume's name from a campus building.

The university's Equality & Diversity Committee announced on September 10 that "From the start of the new academic year the David Hume Tower will be known as 40 George Square" over claims he was involved in the slave trade.

That was in response to Black Lives Matter protests by students following the killing of US black man George Floyd by a police officer in May. An online petition in support of the move gathered less than 2,000 signatures.

Historian Sir Tom Devine, a Professor Emeritus at the university, said on Sunday night that Principal Peter Mathieson should "hang his head in shame."

Devine said students must know "never to indulge in the intellectual sin of anachronistic judgement - i.e. never to impose the values of today on those of the past." And he dubbed Hume the "greatest philosophical mind Scotland has ever produced."

A previously obscure letter from March 1766, discovered in the Princeton University library, Hume to his patron Lord Hertford to buy a slave plantation on the Caribbean island of Grenada.

The letter was published in 2014 by Dr Felix Waldmann, now a Fellow of Christ’s College, Cambridge, in his book Further Letters of David Hume.

Waldmann, who was appointed Edinburgh University's David Hume Fellow in 2016, argued in an article for The Scotsman in July that the philosopher "was aware of the widespread denunciation of slavery by his contemporaries, including in books by his friends and correspondents."

He pointed out that Hume's wrote in his 1753 essay Of National Characters: "I am apt to suspect the negroes to be naturally inferior to the whites."

Waldmann asserted that "Hume was an unashamed racist, who was directly involved in the slave trade," while admitting that the philosopher's advice to Hertford was "the only surviving evidence of Hume’s involvement in the slave trade."

But Devine countered that argument, saying: "In the year of David Hume's reported letter on the plantations, there is no evidence that any groups in Scotland opposed chattel slavery in the colonies."

"In that sense, Hume was a man of his time, no better and no worse than any other Scot at the time," Devine argued. "By the criterion of this stupid decision, the whole of Scotland in that period deserved moral condemnation."

Campaigners have also called for Hume's statue in Edinburgh's Royal Mile to be removed.