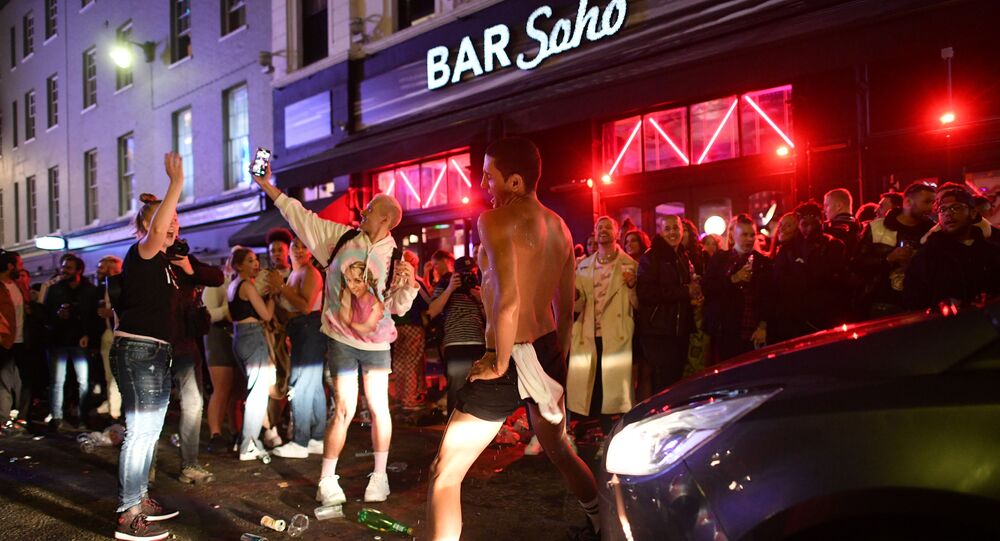 UK Prime Minister Boris Johnson was earlier joined by Chief Medical Officer for England Professor Chris Whitty to expand on the news about fresh COVID-19 restrictions, introduced by the government starting 14 September, including the “Rule of 6”, amid a spike in the number of coronavirus cases in the country.

UK Police officers reportedly anticipate a “last days of Rome” scenario in the country at the weekend, as Britons are expected to engage in a storm of parties ahead of new coronavirus restrictions coming into force on Monday, reported The Telegraph.

New rules announced by Boris Johnson together with Chief Medical Officer for England Professor Chris Whitty amid a surge in COVID-19 cases include restrictions on people meeting socially in England.

Groups of more than six will be banned as of 14 September, with police allowed to break up those in breach of the guidelines and slap violators with fines of around £100.

I'm sorry … and I wish we did not have to take this step. But as your Prime Minister, I must do what is necessary to stop the spread of the virus and to save lives," said Johnson.

As the spike in cases is reported to have manifested particularly among people in their teens, 20s and 30s, concerns have been voiced that in view of the looming new restrictions, many will seek to make the most of this weekend.

An officer based in the northeast of England shared his concerns:

“We are worried this weekend is going to be like the last days of Rome. If people think they are not going to be allowed to go out and enjoy themselves for the next few months, they are going to go crazy and we will be left picking up the pieces.”

A senior officer was cited as revealing fears about whether law enforcement had enough resources to meet the challenge of crowds of party-goers hell-bent on indulging in some last-minute entertainment.

The Chairman of the Police Federation in West Yorkshire, Brian Booth, was quoted as saying officers were “flat out again doing the everyday things such as dealing with stabbings, shootings, drug dealers, missing people etc”.
He added:

“If we are going to be asked to focus on enforcement, something else will have to give.”

This comes amid reports of sold-out venues for the weekend across the country, such as popular 'Sip n' Stroke' parties in Shoreditch, brunch rooftop parties at Brixton's Prince of Wales, and 'London's original boat party' cruise along the Thames.

© AFP 2021 / JUSTIN TALLIS
Revellers dance in the street in the Soho area of London on July 4, 2020, following a further easing of restrictions to allow pubs and restaurants to open during the novel coronavirus COVID-19 pandemic.

As he addressed the nation, the Prime Minister cited the recent spike in infections seen over the past week as leaving him no choice but to tighten lockdown restrictions for the first time since March, warning the new coronavirus restrictions could be in place for months.

© AFP 2021 / IAN KINGTON
Inside the stadium, beer is served to supporters at the Goal Line Bar, which Tottenham say is the longest bar in the UK, ahead of the English Premier League football match between Tottenham Hotspur and Huddersfield Town at Tottenham Hotspur Stadium in London, on April 13, 2019

According to Johnson, apart from a vaccine coming to the rescue, the only other hope is to bank on the introduction of mass daily testing for everyone.

Professor Chris Whitty said the numbers of coronavirus cases among 17 to 18 year-olds and 19 to 21 year-olds had gone up “really quite steeply” since mid-August.

The number of UK coronavirus cases has surged of late, with another 2,919 recorded overnight, according to data on the government website.

This marks a rise of 260 on the figure from the day before, when 2,659 new cases of the respiratory disease were confirmed.

In total, the number of Britons to contract COVID-19 since the start of the outbreak stands at 358,138.

Social media users weighed in with their plans to make the most of the approaching weekend.

Make sure you have a good party this weekend because we are back to groups of no more than 6 from Monday!
That clever virus is so courteous to let us have one final knees up. #cheersRona #LastWeekendOfFreedom

Boris Johnson:
“We need to act to stop a second wave IMMEDIATELY!... From Monday” pic.twitter.com/blFo7Q1Z2D

They have to wait until Doncaster races has finished I presume!

So have fun this weekend, meet up with chums, go to the pub, enjoy a cheeky 2 for 1 at Nandos...

This is just a shot in the dark, but is there a major horse racing event this week?

He wants some big herd immunity parties at the weekend first.

Despite COVID-19 Crisis Britain Has Not Let Its Guard Down to Terrorist Threat, Says Expert