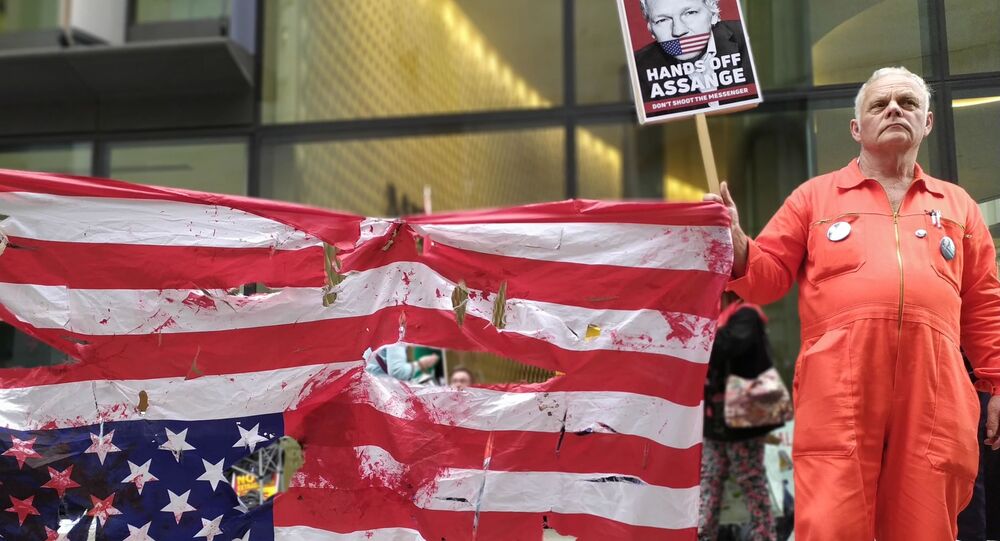 It is immaterial whether one considers Julian Assange to be a reporter because he was engaged in "journalistic activity" when obtaining and publishing classified US documents, the director of the Freedom of the Press Foundation told the court on day three of the WikiLeaks publisher's extradition hearing.

The US indictment against WikiLeaks publisher Julian Assange represents an "unconstitutional" threat to the First Amendment of the United States constitution and to press freedom more generally, Trevor Timm told the Old Bailey on Wednesday.

Mr Timm, co-founder and director of the Freedom of the Press Foundation, testified as a defence expert via video link during the second half of the third day of Mr Assange's substantive extradition hearings.

"My position is that this indictment is clearly unconstitutional", Mr Timm told Mark Summers QC for the defence.

He added that WikiLeaks has a First Amendment right to expose corruption and illegality. Mr Timm gave numerous examples of how seeking to obtain classified documents, working with government leakers, and publishing classified documents was a regular practice engaged in by investigative reporters, activities which successive courts had considered to be constitutionally protected.

Mr Assange's lawyer Jennifer Robinson (@suigenerisjen) says the Wikileaks founder's extradition hearing in London could set a chilling precedent. "It is a clear press freedom case," says Robinson, speaking outside the London court during a break in proceedings. pic.twitter.com/w2c1PS78ea

​He also rebutted the argument, posed within the US indictment against Mr Assange, that advertising a secure drop for potential leakers to confidentially pass on classified documents was an activity which should be criminalised.

"I myself have advocated for leaks in cases where the US secrecy system is hiding abuse, corruption, or illegal acts. In 2014, I published an article specifically calling for the leak of the classified version of the Senate Committee report on ... CIA Torture... and tweeted about it..., as did others", Mr Timm states in his witness statement.

When asked by Mr Summers whether it was ever suggested to him "that this was criminal activity on your part?" Mr Timm responded in the negative adding that it is the "consensus opinion" among legal experts that such activity is protected under the First Amendment.

Mr Timm also added that "news organisations have even taken out advertisements.. to tell whistle-blowers ... about their systems... Such as the popular news site Gizmodo".

​James Lewis QC, cross-examining for the US government, challenged Mr Timm's evidence suggesting that he was not an impartial and unbiased expert because he failed to mention in his report the fact that US prosecutors have submitted statements making clear that they don't think Mr Assange is a journalist and that they were not prosecuting him for politically motivated purposes.

When asked to respond to these assertions by the prosecution Mr Timm replied:

Mr Lewis also argued that the position asserted by the US government is that the charges only related to documents which allegedly endangered US government sources and informants.

But Mr Timm also rebutted those assertions arguing that there are several charges in the indictment that deal with the mere fact that WikiLeaks had in its possession classified US documents. Some of the charges relate to specific documents, he said, whilst others relate to all the documents published by WikiLeaks during the period in question.

When it was put to Mr Timm by Mr Lewis that no responsible journalist or indeed no journalist at all would endanger US government informants unnecessarily, he responded by saying that question is whether or not the acts in question are illegal "not whether we agree with a particular editorial decision".

Mr Timm emphasised the fact that "no court has ever said that the publication of names in this matter would be illegal", adding that the US Congress debated criminalising the publication of sources and a law which was proposed specifically at making it a crime to punish the publication of so called human intelligence failed. This showed that "it wasn’t already illegal in the eyes of Congress" and it decided that it wouldn’t be worth it to make it so, he explained.

"The First Amendment is not a balancing act. It is possible in some types of speech some harm might result. But in the US our people have made the determination that having the free flow of information… makes it vital that they are protected from prosecution even when it ...comes close to a line or a particular subject matter that some of us may find uncomfortable", Mr Timm added.

He clarified that he was not necessarily saying that he would have made the same editorial decisions but rather that editorial judgements shouldn't be made by the government.

A; "You’re twisting my words. I didn’t say I thought it was right or that I agreed with the decision merely that it would be unconstitutional for Mr Assange to be prosecuted under the Espionage Act for this act."

​When asked by Mr Lewis why his opinion should be preferred over the opinion of the courts of the US he responded by saying that his opinion was in line with previous court opinions.

A key argument made by the US government is that Mr Assange is not a journalist. But Mr Timm made clear that under the US constitution it is the activity which is protected irrespective of whether an individual is officially recognised as a journalist by the state.

Earlier in the day political scientist Professor Paul Rogers explained why he believed the prosecution against Mr Assange was politically motivated. Under the terms of the Anglo-US extradition treaty political offences cannot result in extradition, the defence argued during the hearings in February.

The hearings are expected to last for at least three weeks during which time Sputnik shall continue to report on them.