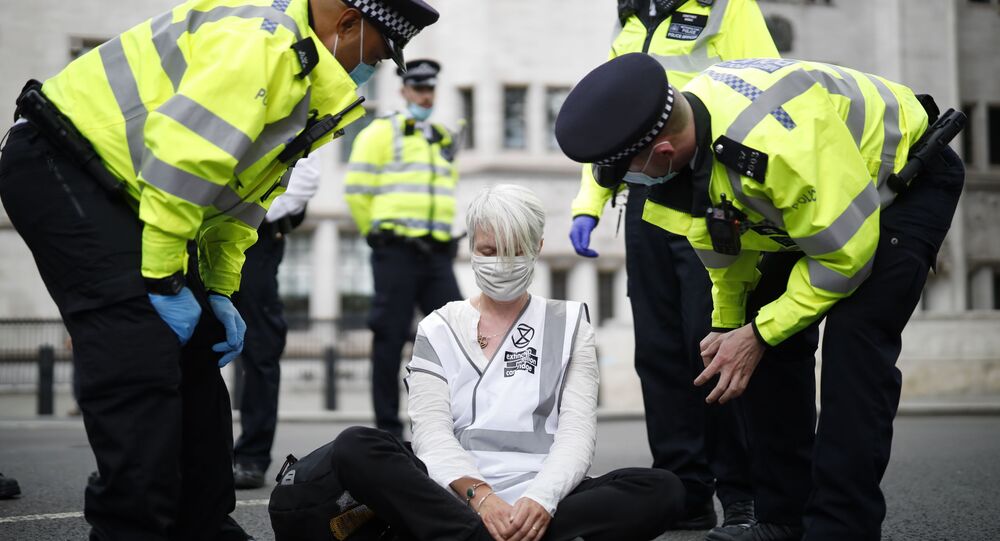 Earlier, Extinction Rebellion said they planned to "peacefully disrupt the UK Parliament in London" with 10 days of demonstrations to force members of parliament back the Climate and Ecological Emergency Bill.

Extinction Rebellion activists glued themselves to the ground outside the entrance to parliament on Thursday to attract the attention of MPs and passersby to what they describe as the government's lack of action in addressing the climate crisis.

The activists were sitting at the entrance to parliament while MPs made their way into the Palace of Westminster.

Breaking: Extinction Rebellion activists have blocked off at least two entrances to Parliament by gluing themselves to the ground. @LBC pic.twitter.com/Zq663ecfsh

​This is the third day of the group's protests. Earlier, they said they will be protesting for 10 days to press lawmakers to support the Climate and Ecological Emergency Bill.

"Over a year on from Parliament’s declaration of a climate and environment emergency the government’s own advisors have said they are neglecting their own inadequate targets, with only four of 21 indicators on track and only two of 31 milestones reached. We will not be bystanders,” the statement from the group reads.

Police are guarding the entrance to the Department for Transport where Extinction Rebellion are protesting against the building of new roads today. Many are in hazmat style suits with tyre marks printed across them. @LBC @LBCNews pic.twitter.com/G98UzxWXCI

​Dozens of activists were arrested during the first days of protests on suspicion of public order offences.

© AFP 2020 / TOLGA AKMEN
Police officers wearing face masks and gloves due to the COVID-19 pandemic, detain an activist from the climate protest group Extinction Rebellion as they demonstrate in Parliament Square in London on September 2, 2020, on the second day of their new season of "mass rebellions".

Extinction Rebellion is a global environmental movement that was founded in the UK in 2018. The group says its aim is to use nonviolent civil disobedience to persuade governments to take action on the environmental crisis.