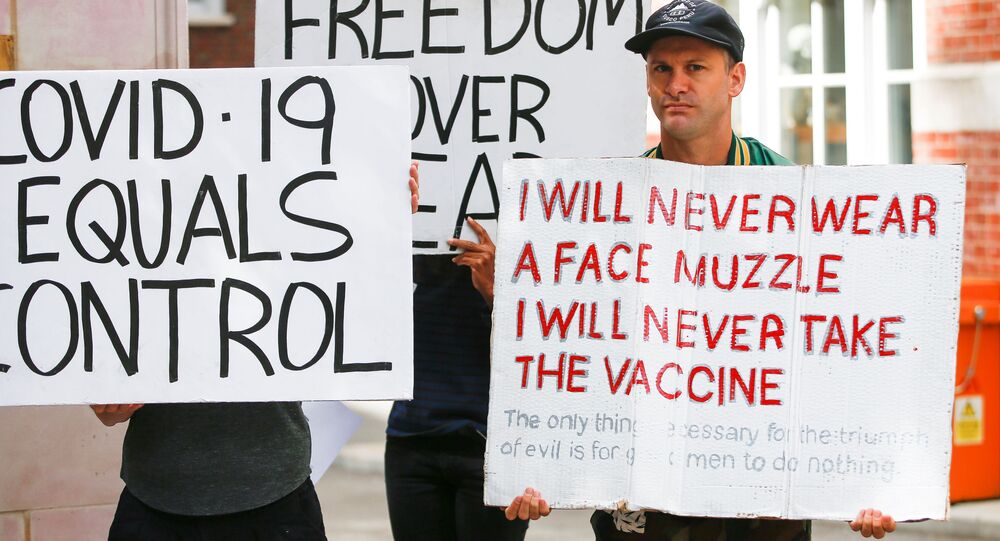 Piers Corbyn, the brother of former Labour Party leader Jeremy Corbyn, was arrested and led away from Trafalgar Square by a large group of police. A related demonstration in Berlin ended in arrests in the "triple figures," according to police.

More than 10,000 people have descended on central London to protest continued government measures in response to the COVID-19 pandemic.

Saturday's 'Unite for Freedom' rally in Trafalgar Square, near Downing Street and Buckingham Palace, is calling for an "end to government lies" and for a restoration of what it characterizes as individual freedoms.

"We accept nothing less," he insisted. "I've said to the police officers.. you have children, you have grandchildren, and you are enforcing the fascism that your own children and grandchildren will have to live with. Join us for goodness sake, and stop serving the psychopaths."

Piers Corbyn was arrested and led away from the square by a large group of police officers wearing surgical masks. The charges behind his detention have not been released.

Placards branding the global coronavirus pandemic as a "hoax" and statements of "no to mandatory vaccines," were seen throughout the demonstration, set to march past Downing Street, where more speakers will address the crowd.

A similar protest with over 18,000 people in Berlin's Under den Linden avenue on the same day ended with arrests in the triple figures.

And at another demonstration in Paris, police issued fines to 73 protesters for breaking lockdown rules.

According to government figures, Britain has registered over 320,000 confirmed cases - the 13th highest total of any country - since the start of the year, with over 41,000 deaths, the fifth highest in the world.

While many of the harshest lockdown measures in place since early March have been progressively eased beginning in June, many businesses, entertainment venues, sports centres and public services remain closed or subject to strict social distancing restrictions.

Shoppers are required to wear masks covering mouth and nose, and new rules for secondary schools announced on Friday evening indicate that pupils will be sent home to quarantine for two weeks if any member of the class is diagnosed with the virus.