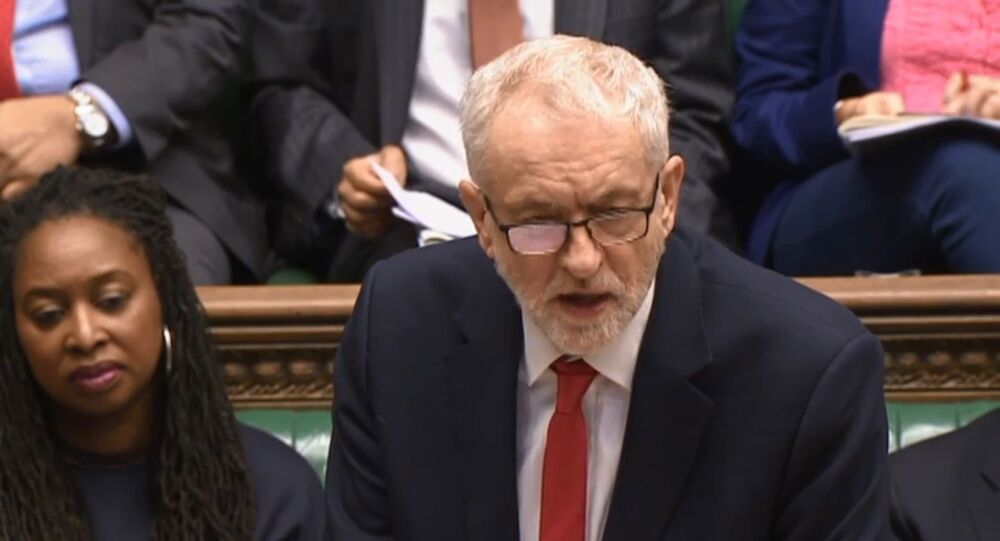 In April a leaked internal report into Labour’s handling of the antisemitism allegations that plagued then-leader Jeremy Corbyn’s tenure hinted at “factional hostility” towards him that might have partially scuppered the party’s chances in the 2019 general election.

Former UK Labour Party leader Jeremy Corbyn is claimed to have “thrown a tantrum” when he discovered he didn’t have an electric battle bus during last year’s unsuccessful general election campaign, reveals a new book, “Left Out: The Inside Story of Labour under Corbyn”, cited by The Telegraph.

At the time, as Corbyn headed to Liverpool for the unveiling of the party’s battle bus, he was deeply disappointed to discover that instead of the environmentally-friendly electric vehicle, like the one used by then-leader of the Liberal Democrats Joe Swinson, the bus at his disposal was run on diesel.

Good night everyone 🌛🌛#ExtinctionRebellion protesters - dressed as bees - have ambushed Jo Swinson’s battle bus in Streatham, S London. This man has glued himself to the windscreen. And yes, it is the electric bus. Talk about a own goal and we are meant to take them seriously pic.twitter.com/sIaeXXbsFH

​An aide was suggested as claiming Corbyn texted staff to say:

“I see the [diesel] bus appears which I hope does not get too many negatives. As soon as rest of grid and operation notes are available can I get them so I can know a week ahead what is being planned and other requests that may appear can be factored in.”

In Labour’s manifesto, the party had pledged to outlaw diesel busses by 2030. An aide in Corbyn’s office, Marsha Jane Thompson, was cited as responding:

“Once we win we can mandate investment in electric buses!”

The authors of the book, journalists Gabriel Pogrund and Patrick Maguire, write that the aide then texted the senior management team’s WhatsApp group to say:

“JC unhappy that lib dems have an electric bus.”

Due to lack of the coveted “green” vehicle, Corbyn’s remaining option was to tour the country by train, struggling with the challenges that occasionally poor phone reception presented, says the book.

The increasingly “frustrated” party leader was said to have insisted he be dialed into conference calls daily, as lack of access to schedules and ‘grids’ during the campaign made him seemingly vulnerable.

“He just wouldn’t drop the stuff about the diary and dialing onto the calls. It was his way of trying to regain control,” an aide is cited as revealing.

Based upon a leaked transcript of confidential messages and emails exchanged between Labour staff, the book claims the party’s leader was often accused of pulling out of events and turning up late during last year’s campaign, as though deliberately “self-sabotaging”.

"With less than three weeks to go and Labour 10 points behind the Tories in most polls, some aides had arrived at the extraordinary conclusion that Corbyn was sabotaging his own campaign,” writes the book.

During a visit to Stoke-on-Trent, a Labour aide reportedly told colleagues:

"JC was deliberately adding extra things and talking to people to delay and then spoke for 30 mins plus at the campaign stop once they had arrived 40 mins late."

The UK Labour party suffered one of its worst general election results in 2019, ceding dozens of seats that the party had held on to for decades.

The population voted overwhelmingly for Conservative Prime Minister Boris Johnson and for his “Brexit” policy pledges, with a 78-seat parliamentary majority claimed by Johnson.

Looking back at his dismally failed election campaign, Corby, who ceded his senior position in the opposition party to Keir Starmer, has since slammed “hostile” officials within the party for sabotaging his team’s chances, reported The Guardian.

Corbyn, jointly with the party’s 2017 election committee, endorsed earlier claims, made after a party report, authored anonymously, was leaked in April.

The document pertained to an anti-semitism inquiry inside the UK Labour Party, and supposedly revealed that investigations into accusations of racism were “thwarted” by internal “factional hostility” towards the leadership of ex-leader Jeremy Corbyn.

According to reportedly uncovered thousands of private WhatsApp messages and emails between senior party members, certain individuals "openly worked against the aims and objectives of the leadership of the Party” to prevent it from winning the 2017 general election.