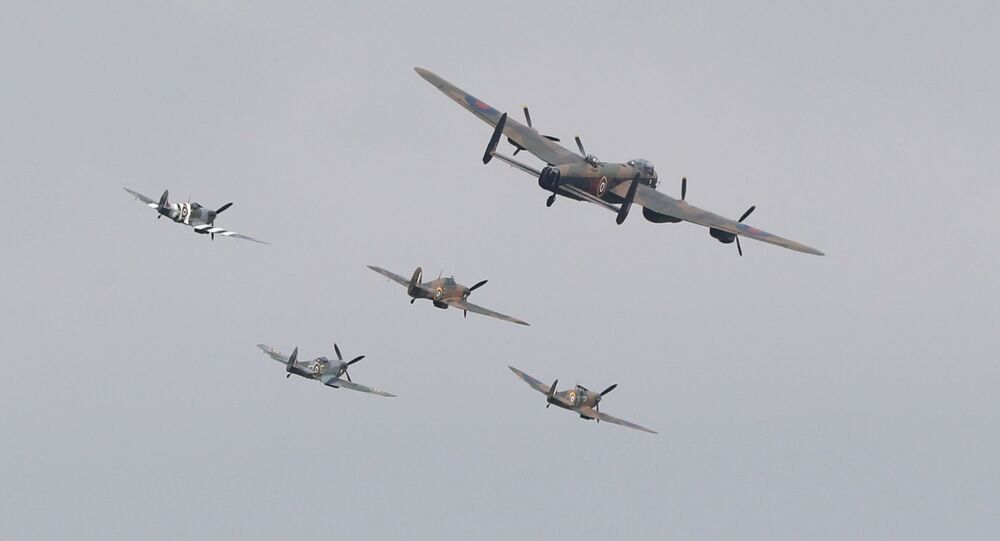 The United Kingdom held commemorative events across the country to mark the 75th Anniversary of the Victory Over Japan on Saturday. Planned fly-overs across the nation's 4 capital cities were dropped, however, while displays by the Red Arrows and other World War 2-era aircraft were able to go ahead.

Spitfires and Hurricanes flew across Britain's skies as the Queen and senior royals gave tribute to the 75th anniversary of Victory Over Japan Day (VJ Day) on Saturday.

Three Spitfires, a Hurricane, and a Lancaster bomber soared over the National Memorial Arboretum in Staffordshire, as Prime Minister Boris Johnson and Prince Charles led tributes to veterans.

The Battle of Britian Memorial Flight crossed the #VJDay remembrance service at the National Memorial Arboretum this morning. Three Spitfires, a Hurricane and a Lancaster bomber roared above the ceremony. #VJDay75 #VJDay @Nat_Mem_Arb @WestMidsPoppy @PoppyLegion pic.twitter.com/741MTOv08Y

PM @BorisJohnson joined TRH The Prince of Wales and The Duchess of Cornwall at the National Memorial Arboretum, in remembrance of those who served and died in the war in the Far East, which ended 75 years ago today.#VJDay75#NeverForgotten pic.twitter.com/4zc49nCw3H

​The RAF's Red Arrows also held a VJ Day flyby over Glasgow Prestwick Airport and Belfast, while flights over Edinburgh and Cardiff were axed due to bad weather and cloudy skies.

Honouring personnel who have served before us #VJDay75 and those that continue to do so @RoyalAirForce A few days @rafredarrows. pic.twitter.com/ARMYrWoZEu

​In a display that would have been the first since the London 2012 Olympic and Paralympic games, the Red Arrows initially planned to fly over the four capital cities of the UK to commemorate the anniversary.

Unfortunately due to poor weather, the @rafredarrows flypast over Edinburgh today for #VJDay75 has been cancelled.

​The official Red Arrows account tweeted to confirm that the aircraft had safely landed.

While the weather prevented flypasts elsewhere, the conditions were wonderful in #Belfast to allow us to mark #VJDay75. Image by Cpl Adam Fletcher flying with @RAFRed10 #RedArrows #NeverForgotten pic.twitter.com/W3uXZ2Dxxv

​Boris Johnson issued an address ahead of the event.

"When the Second World War ended 75 years ago with the surrender of Japan, British soldiers, sailors and airmen were serving in the Far East, fighting hard to achieve victory - and were among the last to come home", he said.

He said that on the 75th anniversary he wanted to remember "what we owe the veterans of the Far East campaign".

“They brought an end to the Second World War, they changed the course of history for the better, liberated southeast Asia, and many paid the ultimate sacrifice".

“That's why on this remarkable anniversary - and every day hereafter - we will remember them".

My letter to the veterans who served in the war in the Far East, which ended 75 years ago today. https://t.co/KPyBqQw28P#VJDay75 pic.twitter.com/0Rqq6Q3YAQ

​Johnson was also involved in a commemorative video earlier in the day featuring leaders of the Commonwealth nations such as Fiji and Canada, as well as top officials from the United States, who led the war in the Pacific theatre.

75 years ago, brave men and women from many nations stood together in the Far East to bring an end to the Second World War. They fought for freedom, won the war and secured the peace.

​The Red Arrows flew over Belfast city centre, above the Titanic building and the Harland and Wolff shipyard as they traversed across Belfast Lough, painting the skies with their famous red, white and blue smoke trails.

The UK commemorates VJ Day on August 15 to mark the date when Japan announced their surrender in 1945 - just 3 months after Nazi Germany surrendered in what is now called Victory in Europe Day (VE Day).

During WW2, the Japanese Empire had been aligned with Nazi Germany and Fascist Italy as part of the Tripartite Pact - a fascist alliance.

Like the expansionist policies of Hitler and Mussolini for 'Lebensraum' and 'Nova Roma', Japan sought to conquer all of Asia and the Pacific as part of its aim to construct a 'Greater East Asia Co-Prosperity Sphere' - annexing Korea, colonising China, and installing puppet governments across the continent.