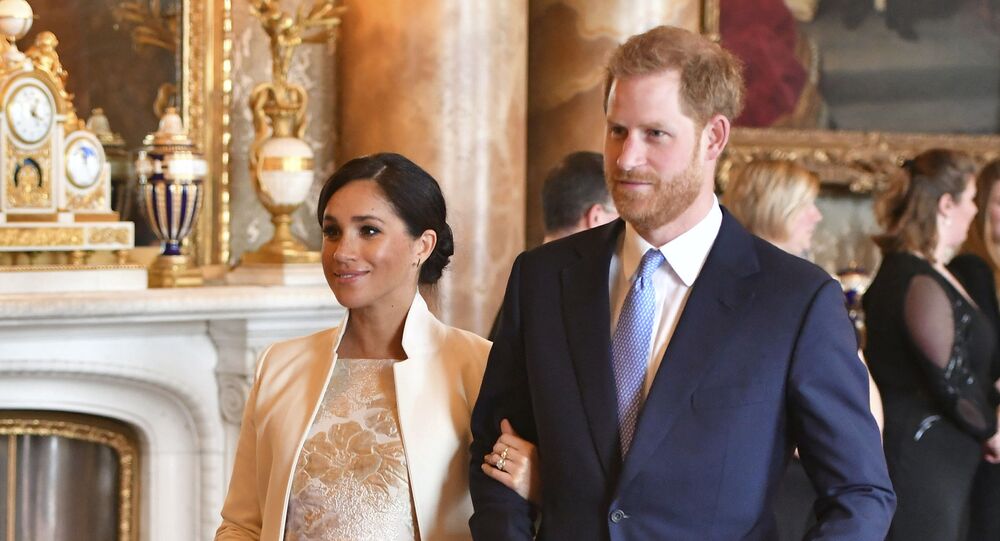 The explosive biography, published on Wednesday, focuses on the years prior to the Sussexes’ step-down from senior royal duties, namely the period of Harry’s courtship, the couple’s engagement, and their less than two-year stint in the UK.

"Finding Freedom", a new tell-all about Meghan Markle and Prince Harry, lays bare a simmering row between the Sussexes and the rest of the royals, vividly explaining what exactly could have led to "Megxit".

Authors, royal journalists Omid Scobie and Carolyn Durand, have collected accounts of the inside talks in the Windsor family, from the time Harry and Meghan's romance started in 2017, and retold them in way that would show the Sussexes' side of the story, in the face of multiple media attacks on them.

© CC BY 4.0 / Office of the Governor-General / Official calls and evening reception for TRH The Duke and Duchess of Sussex
Meghan Markle Was Kidnapped in "Terrorist Attack" as Part of Security Training, New Book Claims

The book, which hit bookstores on Wednesday, claims the Sussexes tried hard to work alongside William's family, but the rift allegedly started with what was taken as royal aides' intrusive comments and recommendations over how Meghan should behave. For instance, as soon as the couple announced they were dating, Meghan was snapped buying flowers from her florist wearing a $300 Maya Brenner necklace with the initials H and M.

She also put a Union Jack sweater on her beagle and posted the snap to Instagram, in an apparent bid to please Harry, but prompting a call from the Palace. The royal aide reportedly asked her not to give extra stimuli for paparazzi to capture her and her fiancé on camera and speculate about the dating couple.

"She was advised that wearing such a necklace only served to encourage the photographers to keep pursuing the images - and new headlines", the book has it, adding a lot of disappointment ensued, including over earlier advice not to smile too widely in front of cameras.

"While she knew the aide had good intentions, the surreal experience of having someone from her boyfriend's office tell her what kind of jewellery to wear or not to smile at a photographer was too much", the authors note.

© AP Photo / Steve Parsons
The newly married Duke and Duchess of Sussex, Meghan Markle and Prince Harry, leave Windsor Castle after their wedding to attend an evening reception at Frogmore House, hosted by the Prince of Wales

Meghan is said to have then vented her frustrations to a close friends of hers:

"They make out like I'm to blame for these pictures, that it looks like I'm encouraging them, that me even acknowledging the cameras may not be sending the right message", she allegedly told her pal.

On another occasion, when Meghan was invited to spend Christmas with the royals at Sandringham, not in line with tradition as she wasn't yet officially part of the family, Princess Michael of Kent turned up at the place wearing a blackamoor brooch - an image of an African man wearing a head covering and rich jewels to contrast with their skin colour.

"In the back of Meghan's mind, she wondered if there wasn't a message being sent in the pin of the torso of an African man, wearing a gold turban and ornate clothing", the book, based on royal aides' and insiders' accounts, claims, arguing that one thing is certain at least - "it showed insensitivity to Meghan's African American roots and the racism she had encountered since paring up with Harry".

The book separately dwells on Meghan’s upscale baby shower - a party thrown by Serena Willians and the Duchess’s other friends in New York’s high-profile Mark Hotel.

The "flashy" event "didn't go down well with the Palace", because Meghan was being "too Hollywood", as she attended the event complete with an exquisite two-tier cake, "gold-embellished containers" filled with sugar crystals, and what not, "Finding Freedom" has it.

Everything You Need to Know About Meghan Markle's Baby Shower | HBZ pic.twitter.com/IsPYgX0av8

Meghan, left "for the UK on a high" on a private jet, which, Durand and Scobie claim, was ruined by the Palace and a "media frenzy" back in Britain.

"Senior courtiers back in the UK were spitting out their morning tea when they saw her lavish baby shower thrown by friends turn into a media circus with what looked like carefully stage-managed paparazzi walks of the duchess in big black sunglasses from her hotel to her car and a laundry list of inside party details reported by US press", Scobie and Duran recount.

The Duke and Duchess of Sussex in January announced they were stepping down, willing to lead a financially independent life free of royal duties, first moving to Canada and then finally settling down in Markle’s home city of Los Angeles.

What kind of hotel suite is so spectacular, Meghan Markle held her baby shower there and a family once stayed there for 16 months? This is the $75,000/night penthouse at The Mark. https://t.co/9GMySMR9Ha pic.twitter.com/5JZhzzX6Q5

The couple decided to "forgo a title for their son, because they wanted him to be a private citizen", the new biography has it, adding the couple don’t completely rule out the boy may reconsider when he grows up. According to royal protocol, the day Prince Charles becomes king, Archie could inherit the title of prince.

Durand and Scobie claim Meghan and Harry shared their concerns with Charles, who said he would consider issuing a "new letters patent" when he became king.

The Sussexes’ press service commented on the book's publication saying Meghan and Harry hadn't been interviewed for the book, which is based on the individual experiences and knowledge of royal reporters.