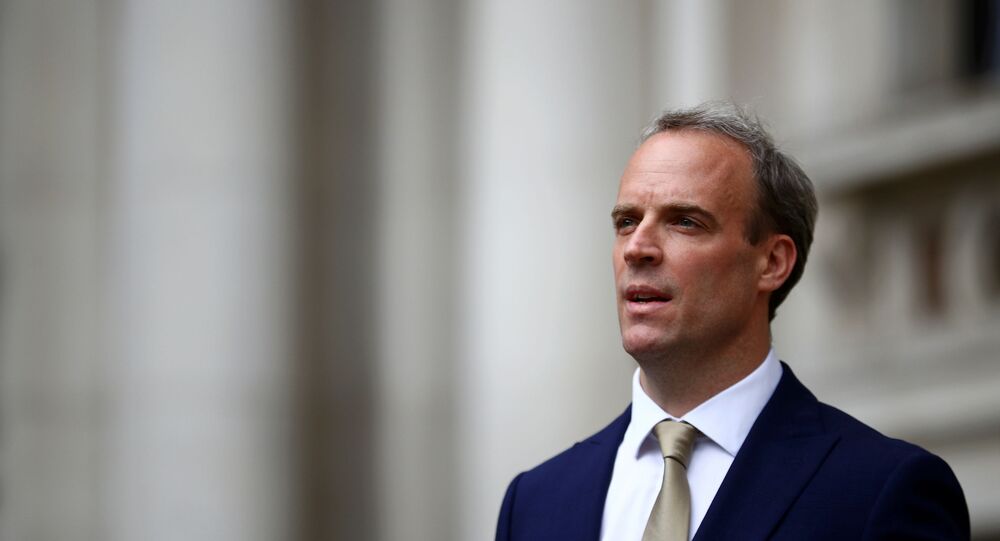 UK foreign secretary has repeatedly issued statements of condemnation over legislation introduced by China in the Hong Kong SAR, primarily in opposition to the new National Security Law designed to combat sedition, succession, and foreign interference in the city.

The British government called on the Hong Kong government to reinstate disqualified candidates allow legislative council elections to be held "as soon as possible", in a joint statement on Sunday with Australia, Canada, New Zealand, and the United States.

UK foreign minister Dominic Raab said in a letter entitled 'Hong Kong: Statement on the Erosion of Rights' that he and his counterparts from the other signatory countries were concerned over the disqualification of certain candidates in elections scheduled to take place in the special administrative region.

Raab said that the move has "undermined the democratic process" and stability in Hong Kong. The countries involved also condemned "the imposition of the new National Security Law, which is eroding the Hong Kong people’s fundamental rights and liberties".

“We call on the Hong Kong government to reinstate the eligibility of disqualified candidates,” the statement said.

“We urge the Hong Kong government to hold the elections as soon as possible".

The statement follows a delay by Hong Kong authorities on Friday amid rising cases of coronavirus. The city's leader, Carrie Lam, described the move as "the most difficult decision" she has had to make in the past seven months.

“We want to ensure fairness and public safety and health, and need to make sure the election is held in an open, fair and impartial manner. This decision is therefore essential", she said.

© REUTERS / Bobby Yip
Student leaders Joshua Wong (L) and Nathan Law (C) are greeted by a supporter after a verdict, on charges of inciting and participating in an illegal assembly in 2014 which led to the "Occupy Central" pro-democracy movement, outside a court in Hong Kong August 15, 2016

Lawrence Ma Yan-Kwok, chairman of the Hong Kong Legal Exchange Foundation, said in an interview with China Daily that the decision to invalidate their candidacy was the right one, as past conduct such as advocating Hong Kong independence, indiscriminately vetoing government proposals, and refusing to recognise Chinese sovereignty over the Hong Kong SAR makes it unlikely they will uphold the Basic Law.

Political scholar Lau Siu-kai, vice-president of the Chinese Association of Hong Kong and Macao Studies, also said that the disqualification was due to the increasingly radical activities by the opposition figures.

The controversial national security law block sedition, separation, and foreign funding for organisations in the city. China has accused the UK of "poisoning" the relationship between the two countries over repeated condemnations of the introduction of the law.

Hong Kong is a former colony of Britain and was handed back to China in 1997, following a 99-year lease on the imperial territory.