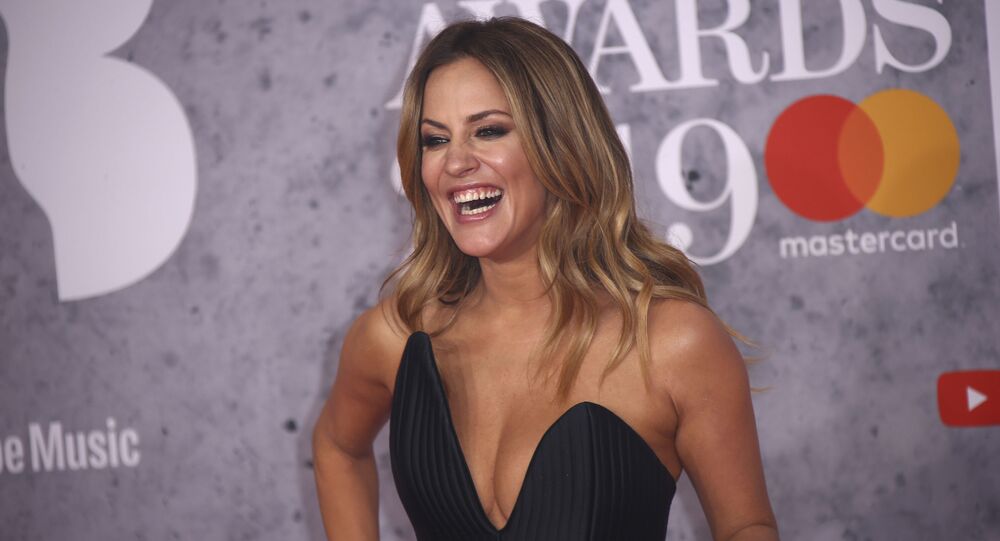 Caroline Flack, who presented the UK version of Love Island, was found hanged at her flat in London in February. Twitter users are divided as to who is to blame - the tabloid media or the Crown Prosecution Service who decided to prosecute her for assault.

Ms Flack's family have accused the police and prosecutors of persecuting her because she was a celebrity.

It has emerged that the Crown Prosecution Service (CPS) originally wanted to give her a caution but Detective Inspector Lauren Bateman appealed and they decided to prosecute.

Detective Inspector Lauren Bateman of Met Police tells court a caution wasn't appropriate in her view - because there was no clear admission of guilt in CF's interview and Lewis Burton believed he'd been assaulted with a lamp - making it a more serious offence.

​During the inquest the star's mother Christine Flack shouted at Det. Insp. Lauren Bateman: "I just think you should be disgusted with yourself."

Mr Burton - who was hit over the head while he slept in December 2019 - said he did not want her to be prosecuted over the incident, which was sparked by Ms Flack’s suspicions of infidelity.

The inquest into Caroline Flack’s death is desperately sad. That such a bright, talented, loving woman should feel so reduced by mean exposure is just a horrible waste. Thinking of her family and friends tonight. 💐

​A paramedic who found her body told an inquest at Poplar Coroner's Court in London that he found a note written by Flack in the flat, in which she wrote: “I hope me and Lewis can one day find harmony.”

Mr Burton, a model and former tennis player, gave evidence to the inquest that Ms Flack, 40, “was not in a good place."

He said: "The media were constantly bashing her character…writing hurtful stories...generally hounding her daily."

The allegation the press paid Caroline Flack’s neighbours to inform on her movements is reminiscent of the tabloids’ most putrid excesses - behaviour that was supposed to have ended after Diana, after Milly Dowler, after Leveson. We need a press that’s free, not out of control.

​The inquest heard that some tabloid newspapers had offered money to Ms Flack’s neighbours in return for snippets of information about her life and had also paid someone for copies of photographs of her blood-soaked bed on the night of the incident.

Opinion on Twitter, Facebook and Instagram appears divided with many people blaming the tabloid media for writing negative stories about a woman who was clearly in a fragile state and others criticising the police and the Crown Prosecution Service for prosecuting her in the first place.

Media leading the anti-police/CPS narrative during the Caroline Flack inquest when it was actually them that hounded that poor woman.

​A minority have stood up for the police and CPS by saying that, if the boot had been on the other foot and it had been a man hitting a woman there would have been outrage if he had not been charged with assault.

RIP Caroline Flack murderd by the CPS and #ScumMedia

​In her verdict ruling, North London Coroner Mary Hassell said she believed Ms Flack took her own life “because of an exacerbation of fluctuating ill health and distress.''

"She knew she would face the media, press, publicity - it would all come down upon her,'' Ms Hassell said.

Ms Flack was a familiar face in many British homes because she presented Love Island, a wildly popular reality TV show in which young and attractive contestants are dropped in a luxury villa and encouraged to pair up.

#CarolineFlack
Sadly only 25 weeks since we lost this beautiful girl.💔 Remembering her laughter & smile for a moment today. As @thewhitmore always reminds us #BeKind & show compassion. Pause before you speak or write as your words can cause pain & distress OR love & support 🧚🏼‍♀️ pic.twitter.com/Zqm6bvNsoV

Earlier in the year it was revealed that Ms Flack had written in an unpublished Instagram post that "the truth has been taken out of my hands and used as entertainment."

She wrote: "I've been having some sort of emotional breakdown for a very long time. But I am NOT a domestic abuser. We had an argument and an accident happened. An accident. The blood that someone SOLD to a newspaper was MY blood and that was something very sad and very personal."

Caroline Flack’s tragic death. Her boyfriend told these reporters severally that they were wrong about the situation, he didn’t press any charges, but the media stirred up an abuse case while silent on Prince Andrew. The CPS danced to the media’s tune and gave them a show.

​Ms Flack was replaced by Irish presenter Laura Whitmore on the winter edition of Love Island and she has now been targeted on social media after she posted an Instagram ad which appeared to endorse the British Army.

So when are we as a society going to stop siding with abusers? Caroline flack was abusive towards her boyfriend at the end of the day. pic.twitter.com/kl88z7R1Qy

​Whitmore wrote: "I was asked to be a guest on a podcast talking about body issues and being a female in a male-dominated industry. As I have done in the past. The other guest was a young female soldier. If this looked like me trying to recruit to the army, that is not the case at all."

Find the 'be kind didn't last long' takes tiring. Caroline Flack suffered years of abuse from the media. Whitmore is promoting a podcast for the British army and receiving (in the most part) genuine criticism.