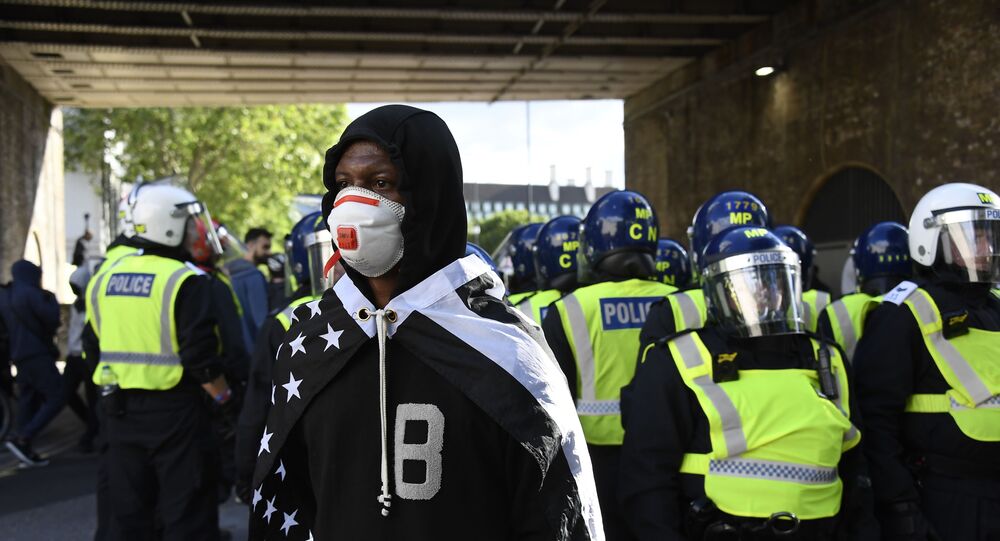 ‘Paramilitary-Style’ March: Hundreds of Protesters March in London to Demand Reparations for Slavery

The protest was organised by several campaign groups protesting against what they call “racial violence” and marked the day on which slavery was abolished in most British colonies in 1834.

Three people were arrested during large demonstrations that stopped traffic in Brixton, south London, on Saturday.

The march was attended by hundreds of activists from several groups including Stop The Maagamizi: We Charge Genocide/Ecocide, Extinction Rebellion, Forever Family Force, and Rhodes Must Fall campaigners.

​The Act for the Abolition of Slavery, which abolished slavery in most British colonies and emancipated more than 800,000 enslaved people, came into force on 1 August 1834. The act paid out nearly $100 million in today's money to compensate slave owners for their losses.

Stop The Maagamizi seeks to establish an all-party parliamentary commission to consider repatriations to descendants of African and Caribbean slaves.

Protesters temporarily blocked a major junction, forcing cars and buses to stop and turn around.

The style of dress imitates the NFAC in the USA. pic.twitter.com/SV1F2VVjKh

​The Rhodes Must Fall campaign, which began in South Africa against a statue of the British empire builder and mining magnate, was adopted by activists at Oxford University.

Some of the demonstrators were wearing the insignia of Forever Family Force, a shadowy group claiming to be fighting against “racism, injustice and inequality”. Members of the group also wore black stab vests under paramilitary-style uniforms.

​One protester was wearing a balaclava, and another angrily confronted police officers who were overseeing the protest, telling them to “f*** off”. They also temporarily occupied a major junction, disrupting traffic.

Saturday’s marchers carried banners reading, “You are lucky we only want reparations not revenge” and “Decolonise now”.

Brexit Party leader Nigel Farage tweeted after the protest: “Terrifying scenes in Brixton today. A paramilitary-style force marching in the streets. This is what the BLM movement wanted from the start and it will divide our society like never before.”

Green Party co-leader Jonathan Bartley hit back by accusing Farage of “trying to create division”. “These people in Brixton today know that love and justice will conquer the fear and hate that you peddle,” he wrote. “Hope is what people need right now and they are showing the pathway toward it.”