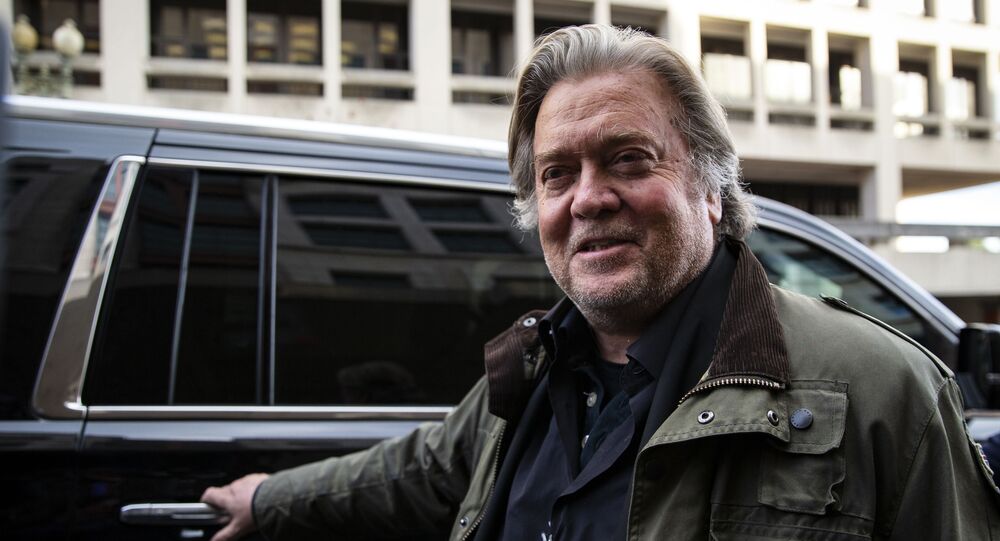 The comments come as a piece of research by thinktank British Future suggests that Dominic Cummings’ multiple breaches of the coronavirus lockdown back in May played a role in the breakdown of public compliance.

Mr Bannon’s comments were to be included in a book written by Peter Geoghegan, a journalist at Open Democracy, on the role of “dark money” in democratic politics called Democracy for Sale. The comments on Cummings will reportedly not be included in the final product as they were made too late, according to The Guardian.

“A brilliant guy. I think Cummings is very smart where he puts his efforts. What I like about him is he has the ability to focus on the main things,” Bannon said.

He also praised Prime Minister Boris Johnson, saying that he thinks the incumbent will become increasingly populist as his tenure goes on, particularly after ditching a “globalist” agenda to “opportunistically jump on Brexit.”

“Guys like Boris and Dominic Cummings came and they were very important, but they were quite late to the party,” he said.

According to The Guardian, Mr Bannon “refused” to say whether he is currently advising Prime Minister Johnson or whether he has met Mr Cummings in person. However, video footage previously emerged in which Bannon can be heard discussing his ties with Mr Johnson.

“I’ve been talking to him all weekend about his speech. We went back and forth over the text,” Mr Bannon can be heard saying. Bannon is then asked how he stayed in communication with Mr Johnson, to which he replies, “talked to him initially over the phone then it’s just easier to go back and forth on text.” Mr Bannon was referring to Johnson’s 2018 speech in which he resigned from his position as Foreign Secretary under Theresa May and attacked her government for what he described as its “dithering” on Brexit.

Also in his comments to Mr Geoghegan, Bannon reveals how closely aligned his position on Brexit is with that of Mr Johnson and Mr Cummings.

“There is one choice: hard out, no deal. It won’t be disruptive,” Bannon allegedly said.

Politically speaking, Bannon reportedly sees the Prime Minister as edging closer toward more “economic nationalist tendencies” and says that “Boris will adapt his policies to become more populist over time.”

Mr Bannon is also said to reveal that he started visiting the UK regularly in 2013, when he struck a friendship with then-UKIP leader, Nigel Farage. The former investment banker and Trump confidante reportedly said that by 2014 he began to realise that supporters of Mr Farage’s party resembled frustrated Americans following the 2008 financial crash. “They were the exact Tea Party crowds of 2010, where we had this huge populist revolt,” he said. Bannon is said to also admit that he met with Aaron Banks, the businessman who helped to establish the Brexit-supporting Leave.EU campaign.