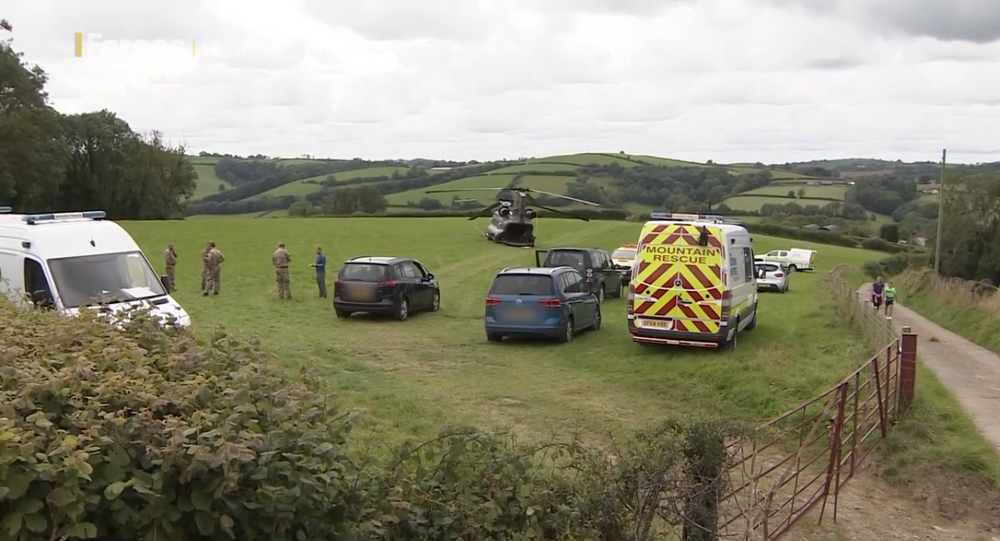 The crew of a British Royal Air Force (RAF) Chinook helicopter is lucky to be alive after their aircraft struck power lines in southern Wales. Photos posted online show the chopper in a field with a busted-up windscreen.

On the evening of July 28, an RAF Chinook helicopter made an emergency landing in a field near the village of Llangynin in Carmarthenshire, Wales. The dual-rotored chopper was on a low-level training mission from RAF Odiham in Hampshire, England, when it struck telephone wires, cutting power to the aircraft and causing it to plummet from the sky.

Photos posted online of the front of the chopper show its windshield, which encompasses almost the entire nose section, cracked and shattered.

One very lucky #CH47 #Chinook crew from the @RoyalAirForce pic.twitter.com/UMDFOLG8kZ

Sputnik Screenshot
Emergency services and British military officials respond to crash-landing of RAF Chinook helicopter in a field outside of Llangynin, Carmarthenshire, Wales, on July 28, 2020

An RAF spokesperson said in a news release the heavy-lift chopper sustained “minor damage,” adding that one crew member has "minor injuries due to some broken glass."

However, the marks left on the chopper’s nose reminded some folks of a different kind of danger. A popular Twitter account named RAF Luton - after a Second World War-era airfield that was returned to civilian use after the war - which describes itself as “the assumed Official Twitter account of the world's most mysterious & secret (and fictitious) military base,” reposted the photos with the caption: “We can neither confirm nor deny that one of our Osprey helijets was attacked by one of our T-Rex.”

BREAKING: We can neither confirm nor deny that one of our Osprey helijets was attacked by one of our T-Rex. pic.twitter.com/cs7sUr63Te

​Pam Windsor, a community councilor in Llangynin, told the BBC the power suddenly cut off in her home on Tuesday night immediately after her family heard a "loud sort of droning noise of a helicopter very close by.”

"We went outside and we could see the Chinook very low, just passing over the village heading towards fields in the distance,” she said. "My son, Alex, and I jumped into his vehicle and headed down there in case of any injuries or anything. Luckily they had landed very safely in a field just a few minutes from the village but unfortunate as they had come down they had hit some sort of electric overhead cables.”

“Other helicopters are being brought into assist with the recovery operation,” the Pembrokeshire Herald reported.

Video: Strong Winds Cause Ten-Tonne Crane to Collapse and Crash Into Sea in Eastern China